A requiem for the Pitt-Penn State game 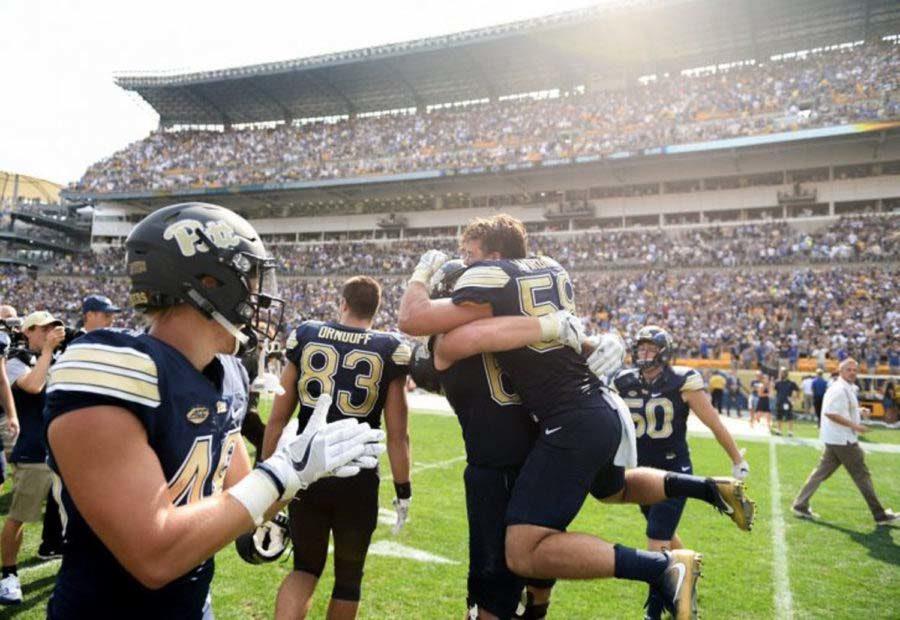 Pitt and Penn State football have had a messy and complicated on and off relationship. The last time Pitt won against Penn State was in 2016, when Pitt won with a last-minute interception and a final score of 42-39.

With the Penn State game approaching on Sept. 14 at Beaver Stadium, it brings to an end — for now — the on-and-off historic rivalry between the Pitt Panthers and the Penn State Nittany Lions.

The 2019 meeting will mark the 100th all-time between the Panthers and Nittany Lions as well as the final regularly scheduled Pitt-Penn State football game for the foreseeable future. Penn State athletic director Sandy Barbour said last May the rivalry would most likely be shelved until “some point after 2030.”

The rivalry, which started in the 1890s, came to a halt in 2000 when the two schools couldn’t reach a deal. They finally negotiated a four-game series in 2012, with the inaugural game set for Pittsburgh in 2016.

As a lifelong Pitt fan who was a first-year student when the rivalry returned, I was thrilled to see it come back. The stories told by older Pitt fans, alumni and football stars about this rivalry made me even more impatient to see what it was all about.

I remember getting to Heinz Field at 5 a.m on Sept. 10 to get the best seats I could for the game, when it was still dark out. This seems ridiculous until you consider that some fans started showing up the day before. Eventually, the sun began to rise and the line went as far as the eye could see. People ended up rushing the gates and into the seats prepared for the biggest Pitt football game to be played in years.

The game didn’t disappoint as the Panthers jumped out in front and built a 28-7 lead in the second quarter. Penn State battled back and continued to gain on Pitt toward the end of the game. With Pitt up 42-39 and fewer than three minutes to go, Penn State quarterback Trace McSorley threw what looked to be the game-winning pass to wide receiver DaShae Hamilton, who dropped what would’ve been a sure touchdown. Less than a minute later, McSorley overthrew his pass and it was intercepted by cornerback Ryan Lewis, ending the game.

The first game of the series still ranks as one of the best college football games I’ve ever seen. Pitt played some great football and earned a big win for the program, one that became even bigger as Penn State went 10-2 on the season and won the Big 10 conference.

Since 2016, though, the Nittany Lions have thoroughly dominated the Panthers. They easily beat a pitiful Max Browne-led offense in 2017 at Beaver Stadium, 33-14, to level the series. In 2018, Penn State ran over Pitt in the second half of a game filled with an unimaginable amount of mistakes made on special teams by the Panthers in rainy conditions, as they scored 37 unanswered points and won 51-6 at Heinz Field.

With the teams’ upcoming matchup being their last for a long time, it’s important to know how we got here and what it means for the rivalry going forward.

While Pitt joining a conference might seem like a non-issue, it was a big one to former Penn State football coach Joe Paterno. He wanted to create an Eastern Sports conference that would include schools like Pitt, Penn State, Syracuse, Boston College, West Virginia and Temple. The schools would not only be united in geography and sports, but also academics.

To Paterno’s chagrin, the schools spurned his wish, with Syracuse and Boston College joining the Big East in 1979 and Pitt joining three years later. Because of this, many believe that Paterno held a grudge against Pitt for not joining his conference and led to the rivalry being on hold from 1993 to 1996.

Paterno also requested Penn State have two home games at Beaver Stadium for every game in Pittsburgh. His rationale was based on the fact that most of the games were played in Pittsburgh, because the old Pitt Stadium used to have greater capacity than PSU’s Beaver Stadium. Pitt was adamant that the rivalry be hosted at each location every other year and this lead to the rivalry being dormant for 16 years.

When they were both independents from the 1890s to the 1990s, scheduling wasn’t difficult. But with the amount of conference games that are now played, these rivalries have to be scheduled years in advance.

Also, each team having the other as a non-conference opponent makes their schedule harder than just playing an easier mid-major team or FCS team. With the 2016 season ending and the Nittany Lions missing out on the College Football Playoff despite winning the Big Ten title and beating Ohio State, they still fell short because they finished 10-2 while the Buckeyes were 11-1.

This also ties into Penn State having an already tough schedule in the future with in-conference teams like Ohio State, Michigan and Michigan State as well as non-conference opponents like Auburn, Virginia Tech and West Virginia. Playing Pitt while also playing these teams doesn’t make much sense when it’s evident that having a better overall record is more important than strength of schedule.

But don’t give the Nittany Lions too much credit, as their smugness and arrogance toward Pitt has been around for decades. Penn State head coach James Franklin, after the 2017 win, said that Pitt viewed its win against them as “their super bowl,” while beating Pitt to them was “like beating Akron.”

This attitude toward Pitt is a sad and ignorant one for those who support Penn State to have. For a rivalry that has so much potential to be great due to proximity and quality of both programs, seeing that Penn State could care less about the rivalry is tough for a Pitt fan to take.

With conference realignment, Pitt doesn’t have many real rivals in the ACC, with Syracuse being the closest, although it’s much more of a basketball rivalry. Long gone are the days of playing the Backyard Brawl against West Virginia every year in the Big East, as well as playing Notre Dame most years, especially during the ’90s, 2000s and earlier in this decade.

While the Backyard Brawl is resurrected for 2022 to 2025, the feel of the rivalry during conference years won’t be there and may sadly fall into the same trap as this recent Penn State rivalry. Notre Dame, which does play ACC opponents, only plays Pitt sporadically eight times until 2036, lessening the rivalry’s importance.

The Pitt-Penn State rivalry could be one of the best in college football. Unfortunately, conference realignment, pompousness and a century-long bitterness between the two programs has gotten in the way of a great game for all college football fans to enjoy.