Everything we know about the Starship food delivery robots 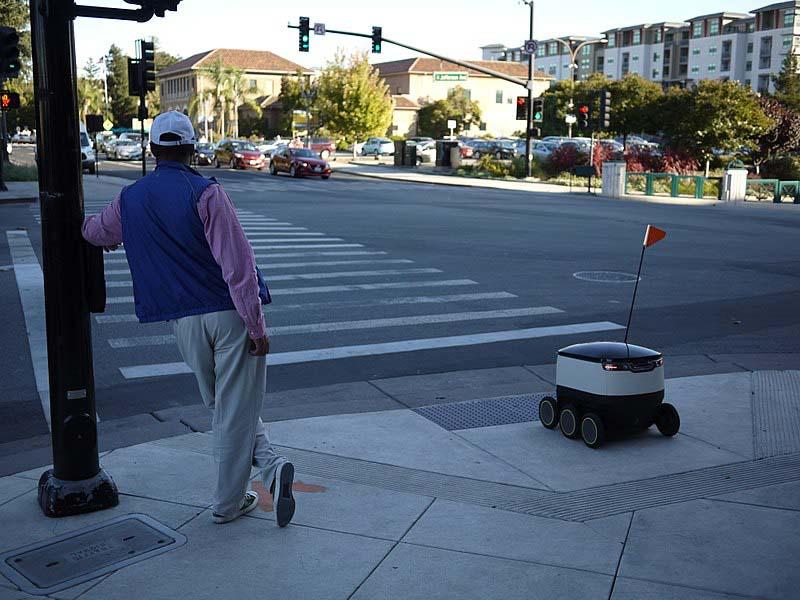 They made first contact on George Mason University’s campus in Northern Virginia.

And later this month, Pitt will have its own close encounter. The white, 2-foot tall battery-powered delivery robots will be sharing the sidewalk with Oakland pedestrians starting sometime in late September.

Starship announced in August that it will partner with Pitt and its dining contractor Sodexo to allow customers to order products from campus vendors like Forbes Street Market for home delivery via the robots. According to an Aug. 20 press release, the company plans to expand the service to 100 campuses over the next two years, including Purdue University, where the program launched Monday.

Starship shared more details about the Pitt program at an Aug. 28 meeting hosted by the Oakland Planning and Development Corporation.

David Catania, Starship’s head of government affairs, said at the meeting that the company would launch a pilot fleet of 25 robots in late September with a flat delivery rate of $1.99. Starship is in talks to potentially expand the program to other parts of the City, Catania said, but the pilot program will focus solely on Pitt’s campus.

“At the moment, it’s primarily the University,” Catania said. “We are open to going beyond that, but we want to be respectful to the City and introduce it slowly and in a measured way that increases the comfort level.”

The delivery robots move at a maximum of 4 mph to fill orders placed through the Starship Deliveries app. They’re 98% autonomous, according to Starship, monitored remotely by humans who can take control if necessary, and each is equipped with its own locks, GPS and camera. The robots make little noise and are designed to avoid cars, Catania said at the meeting.

University spokesperson Kevin Zwick said Pitt doesn’t have anything to say about the robots yet, so some questions — the date of the program launch, the delivery area and the full range of delivery options available — remain unanswered.

But Starship’s campus expansion is part of a larger explosion of delivery robots around the world. One January report found that the delivery robot market is expected to triple from $11.4 million in 2018 to $34 million by 2024.

Outside college campuses, delivery services like DoorDash and Postmates are experimenting with the robots. Even San Francisco, which tried to ban the devices in 2017, is looking to welcome a fleet in the near future. The president of the city’s board of supervisors, who said in 2017 that the robots were “inviting potential collisions with people” and that “sidewalks are for people, not robots,” later relented, allowing Postmates to test a fleet of delivery robots on San Francisco’s sidewalks.

In the first two months after Starship rolled out its fleet at George Mason, the company reported thousands of delivery orders on campus, including a notable number of breakfast orders.

“Breakfast is an easy meal to miss. Imagine you’re running late for class or you don’t want to leave your bed after an evening of ‘studying,’” Starship told The Washington Post. “Our robots allow the breakfast to come to you, at a time you want. We’ve found this to be very popular with students to date at GMU.”