Review: Like a bad clown, cheap tricks are all ‘It Chapter 2’ can muster 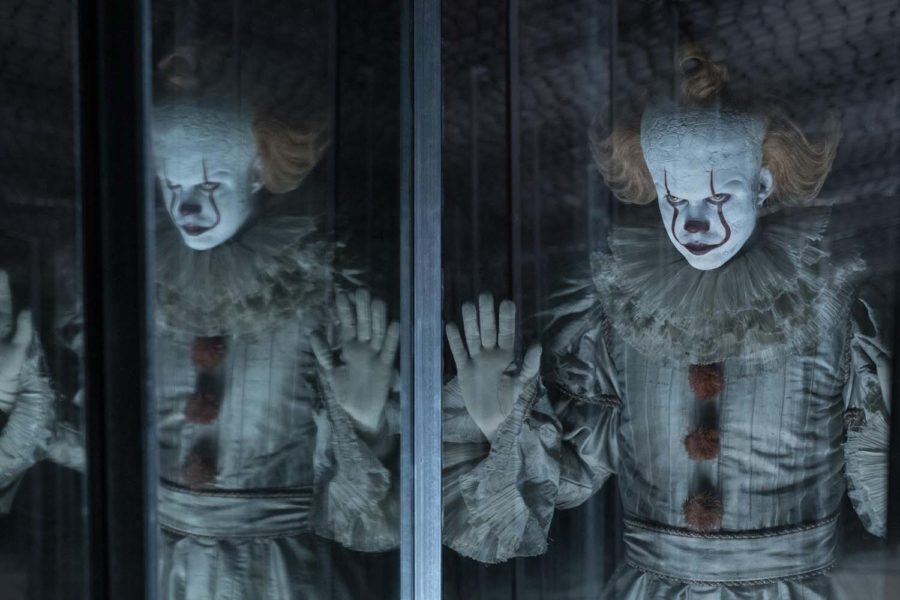 Bill Skarsgard as Pennywise in "It Chapter Two."

Stephen King film adaptations are the cinematic version of the lottery.

Sometimes we get really good adaptations such as “The Shining” and “Shawshank Redemption.” Other times we get dumpster fires such as “The Dark Tower” and “Maximum Overdrive.” This isn’t to say the original novels themselves are bad — but it seems that Stephen King’s film adaptations have an inconsistent track record.

Two years ago we received a fantastic adaptation of “It,” with great writing, wonderful child actors and good direction. But no amount of quality could save the sequel, “It Chapter 2,” from being a sloppy, drawn out, jump-scare-infested step down.

“It Chapter 2” picks up the story 27 years later. The Losers’ Club have all grown up and moved on from their lives in Derry, Maine — everyone except Mike Hanlon (Isaiah Mustafa) who soon finds out that the evil clown Pennywise (Bill Skarsgard) is back. Mike calls upon the Losers’ Club to come back and finish Pennywise off once and for all.

To extend the little optimism left in this review, let’s go over the pros of “It Chapter 2.” The cast is easily the best part of this movie. The adult actors accurately match their child counterparts and both give excellent performances. Bill Hader’s performance as Richie is the definitive standout, delivering hilarious dialogue that prompted genuine laughter from me every time. That’s another thing “It Chapter 2” has going for it — the humor. While it’s not quite as funny as the first one, this sequel has some witty dialogue that will definitely get a laugh out of you.

Skarsgard as Pennywise is also a standout, both funny and creepy when the script demands him to be. With the help of some great practical effects, Skarsgard helps deliver some terrifying scares, while the excellent cinematography and directing offer some great moments of tension.

Unfortunately that is where the positives for this movie end — the rest of the film is a complete mess. Despite having great practical effects, the CGI for this film is horrendous. It’s so bad the filmmakers had to rely on flashy strobe lights throughout the bloated two-and-a-half-hour runtime to hide how bad it is.

The movie relies heavily on the CGI, rather than using its budget for practical effects or some great animatronics. People tend to take animatronics for granted, but a film like “An American Werewolf in London” proves that well-made animatronics can produce great scares.

One use of CGI that stuck out in an awful way was the film’s attempt at de-aging the child actors. In the two years since “It” came out, they’ve all aged dramatically. The filmmakers needed to make the actors look more like they did in the first film — and they did not have the technology or skill to make it work. A shot in the trailer shows a young Richie (Finn Wolfhard) with a face that’s just too smooth and clean to be human.

During the climax there is a scene where a head begins to sprout spider-like legs — and at no point did it look real or creepy.

The jump scares also kill whatever remaining horror this movie had left. Once you use one, everything else becomes less scary. But the movie decides to continue using them, verbally assaulting the viewer with even more flashy strobe lights and terrible CGI.

It’s like a child trying to say “boo” underneath a flashlight every five minutes, who then shines it in your face in a pitiful attempt to scare you. Maybe it worked the first time but after the seventh it vexes you to the point where you want to grab that flashlight and smack them across the face with it.

Then you want to use that flashlight to search for any semblance of an engaging narrative within whatever dark joke the writers called a story. It starts out interesting enough, but then the characters each have to go on an unnecessary fetch quest for artifacts to perform an ancient Native American ritual to defeat Pennywise. That isn’t a typo — that’s the actual story of the movie, and the writers play it completely seriously.

If this movie wasn’t already long enough, the writers decided they needed pointless filler too. This came in the form of bringing back a character from the first film — who was presumed dead — just to serve as a mild inconvenience to the main characters’ campaign. This added 10-15 minutes to the movie’s already long runtime.

It’s such a shame that a great cast and visual effects team are wasted on such an incohesive slog. There are some enjoyable moments in this film, and it doesn’t even come close to being the worst movie to come out this year — I’m looking at you “Enter the Anime.” If you were a massive fan of the first film, you may end up enjoying this film. If you haven’t seen the first film and are seeking a good horror/thriller comedy for the Halloween season, you are better off taking your money to see “Ready or Not.”

More than simply wasting time and money, “It Chapter 2” commits one of the greatest sins a sequel can — making the viewer doubt whether or not the first film was good. Many have praised this sequel for being faithful to the original novel, but if that’s the case, I don’t want anything to do with it. The only hope this movie provides is offering more exposure to Bill Hader — because, my god, he deserves better than this.