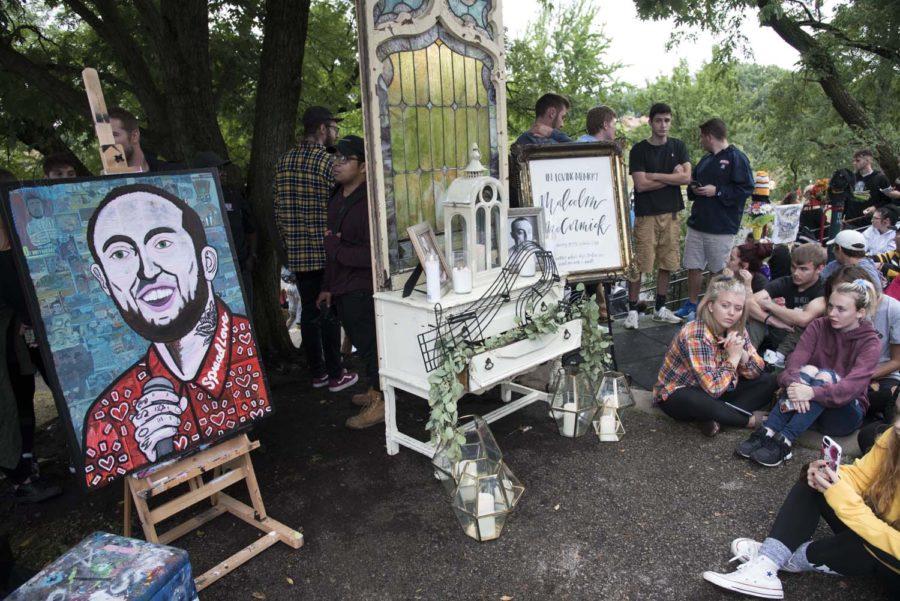 A memorial for Pittsburgh musician Mac Miller at Blue Slide Park in September 2018.

I remember the first time I ever heard a Mac Miller song. It was a Sunday afternoon at my grandparents’ house and my older cousin was sitting on the couch listening to a low-quality audio track that he downloaded onto his phone. Young, curious and tuned in to the lyrical raps that were like nothing I had ever heard before, I asked him what the song was called.

The moment I learned his name, my life changed. I was utterly captivated by his music. As a Pittsburgh kid, I couldn’t think of anything cooler than someone who went to the same high school as my mom making music about the place I call home.

Back in 2010, before the age of Spotify, I found a way to download all of the mixtape “K.I.D.S.” onto my flip phone through LimeWire. The audio wasn’t top quality, but his raps were.

After he released his debut studio album “Blue Slide Park,” he became a household name in Pittsburgh. My friends and I spent our free time bonding over our love of his music. We rode our bikes while listening to “Knock Knock,” played basketball at the local playground with “Smile Back” and hung out on the front porch cracking jokes and making weekend plans to “Senior Skip Day.” His songs about being a kid in Pittsburgh were fun and relatable, and they made me feel free from the responsibilities and woes of growing up.

As I grew up, Mac grew up too. We went through the struggles of maturity together, as the albums he produced included songs with lyrics that weren’t as carefree and fun-loving as before. These songs were personal and insightful, and explored topics of love, loss, depression and the meaning of life itself.

When I faced my own struggles and life became difficult at times, I turned to him for guidance and comfort. His song “REMember” particularly stuck with me when my aunt passed away. I felt like I had lost my best friend like he had lost one of his, and the beautifully honest lyrics showed that he truly understood such a heartbreak. He had been through it before and understood exactly how it felt to lose a loved one.

The more music he put out there for the world, the more the world loved and respected him as an artist. He was nominated for awards and his songs were played more frequently on the radio – his talent was undeniable as a musician. It was amazing to watch his rise to fame, but he never forgot where he came from and always respected the city that raised him and made him what he was.

I still listen to “Frick Park Market” every time I’m on a plane home to Pittsburgh. There’s no better song that perfectly encapsulates the character of the City and what it was like to grow up here. He made music for his city first before he made it for the world.

When he began dating singer Ariana Grande and collaborated with her on songs “The Way” and “My Favorite Part,” Mac experienced more fame than he ever had before. I was so happy for him that he was finally getting the recognition he deserved, but when stories surfaced mentioning him as “Ariana Grande’s boyfriend,” I couldn’t help but feel as though it was disrespectful to the man that was much more than a popular singer’s boyfriend — he was Mac Miller first.

He was our hometown hero, the one who started from the bottom and made his way to the top, deserving of all the fame he had and more.

At some point, all that fame and money did more harm than good for him. He was always honest with his fans about his battles with addiction, but living a life of loneliness in Los Angeles and having money at his disposal to buy whatever drugs he wanted was a bad combination for Mac that didn’t help his sobriety. It was clear in his music that he had a problem and didn’t always feel in control, but I never thought that one day he’d be gone forever because of it.

The day he died, I drove home from work playing “Come Back to Earth” on repeat on my car radio. Tears streamed down my cheek as raindrops streaked across my windshield — the rain didn’t seem to stop coming down for an entire week after his passing, as if the Pittsburgh skies couldn’t hold back its own tears at the loss of one of its own.

One year later, Mac is no longer with us, but his legacy still lives on proudly here in Pittsburgh. Frick Park Playground was renamed Blue Slide Park after his debut album. The slide is painted with a fresh coat of blue paint, and it’s a place where we can all come together to remember the talented, genuine human being he was.

It’s bittersweet going there as an adult after his passing because the place I once played as a child holds a different meaning now — it’s the place where a Pittsburgh boy grew up to become a successful musician full of positivity and authenticity. Every day when I pass the park on my drive home, I look over at the blue slide and remember his optimistic words that will always give me hope that things will get better:

“No matter where life takes me, find me with a smile.”