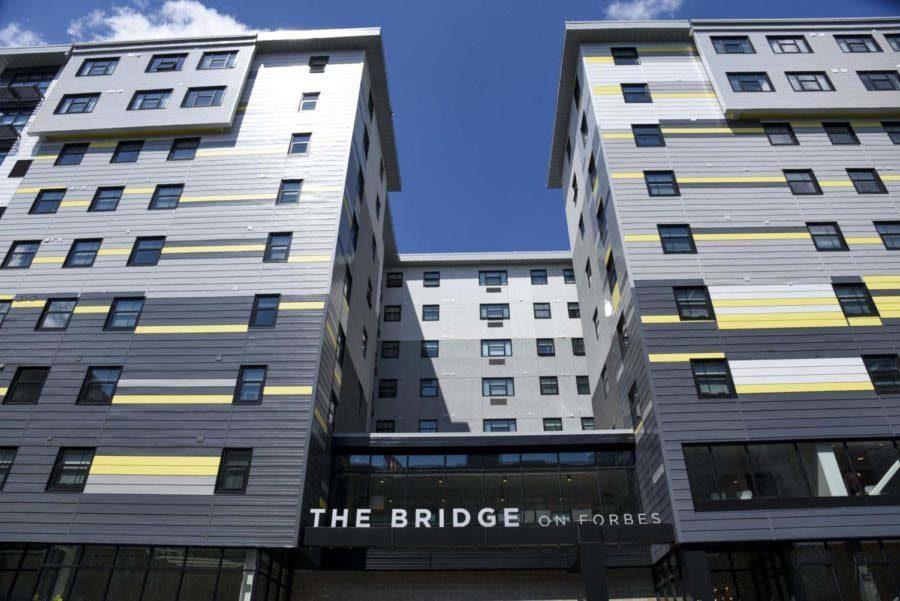 Pitt has leased 87 of the Bridge on Forbes’ 197 luxury apartments, creating a “master lease” for student athletes.

The newly opened Bridge on Forbes could easily be mistaken for a hotel, with tall glass windows, bright yellow lights and a lounge furnished with couches and large wooden tables.

But the building located between Halket Street and McKee Place is actually a luxury apartment complex geared toward students in the area. And while Pitt students of any persuasion are welcome to apply for a lease, a certain number of student athletes are guaranteed a place to stay there, starting this year.

While anyone — student or non-student — can rent an apartment in the building, Pitt is leasing 87 of the building’s 197 apartments, creating a “master lease” for student athletes. This year, the leased units are occupied by 230 student athletes, community assistants and a community director. The upscale building features a 24-hour gym and study rooms that residents can book.

Zwick did not respond to questions asking how much each athlete is paying the University to live at the Bridge. Another University spokesman, Joe Miksch, said in February that the apartments would be priced similarly to Pitt’s other apartment-style living options like Bouquet Gardens, where a single apartment costs $4,250 per semester to rent.

Zwick noted that although Pitt leases additional housing to accommodate students “when necessary,” the University’s campus master plan calls for more on-campus housing in the future.

Sophomore football player Will Connelly, a rehab science major, said the new building is noticeably nicer than Sutherland, where athletes were housed until last year.

“It was really nice having the gym to use in the building before practices began,” Connelly said. “It’s an amazing apartment and I really enjoy having my own kitchen because I’ve never had one before.”

The athletes living at the Bridge are also able to make use of a shuttle service that buses players from the building to practice.

In addition to the gym and shuttle service, Connelly said he’s enjoying the other options offered at the Bridge, including the study rooms and a community coffee pot for residents who may not have one but need coffee before classes.

“I really like how I have to option to book out the study rooms. If I have a meeting, I know I could just schedule it inside the study room,” Connelly said. “It’s a big difference from living in Sutherland last year.”

Sophomore nursing major Maddy Sheffer, a non-athlete renting at the Bridge, said she appreciates the Bridge’s amenities and its proximity to her nursing classes in the Victoria Building.

“My favorite part about living there is the location,” Sheffer said. “It may be off campus, but it’s not so far off campus to the point where it doesn’t even feel like you’re at Pitt.”

Tyler Perlmutter — the chief operator of Pinecrest, the company responsible for the building plans — said that despite the “luxury” label, the goal of the Bridge on Forbes was to create an environment for students to learn rather than lounge, hence the existence of the study rooms.

Construction on the building began in July 2017 and was finished this August. The building opened before classes began, allowing students time to settle in, Perlmutter said.

“We felt that there was a shortage of high-end housing being offered for students, which is why we built The Bridge,” Perlmutter said. He said the company was “adamant” about having the apartments open before classes began.

Since this is the first year that the Bridge is open, this serves as a pilot year to see what needs improvement and what’s working for student residents. There are 197 apartments inside the Bridge and each one is being rented out this year. The leases begin in August and finish July 31, 2020.

“We’re trying to listen to residents this year about what they like and don’t like, and maintain a nice living environment,” Perlmutter said. “We want to create value and run the building well in terms of equity.”