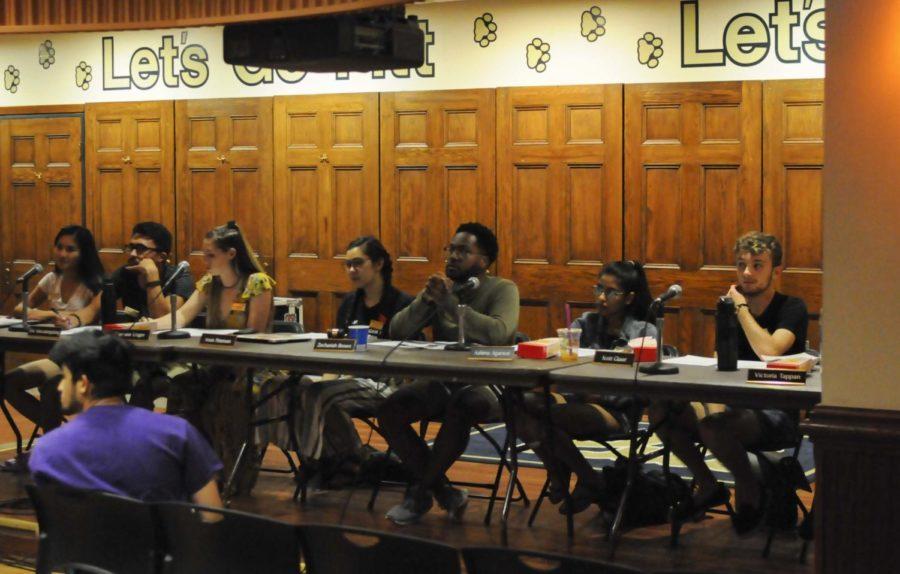 SGB provided an update on the student task force for clubs and organizations in response to SORC’s updated registration guidelines Tuesday night.

At its second public meeting of the year Tuesday night, Student Government Board provided an update on a recently announced student task force, as well as several new upcoming initiatives.

SGB President Zechariah Brown announced Friday that SGB will form a task force with student organization leaders to address new naming guidelines that will affect many student groups at Pitt. He added Tuesday that SGB Executive Vice President Anaïs Peterson, SGB member Eric Macadangdang, SGB’s Judicial Committee and its chair, Grace Nelson, will all serve on the task force. Brown said he reached out on Tuesday to 13 of the hundreds of clubs that could be affected by the change and is in the process of scheduling the task force’s first meeting.

SORC announced two weeks ago that beginning fall 2020, its registration guidelines would prohibit the names of independent student organizations from including University trademarks or wordmarks like “Pitt” and “Panther,” instead encouraging clubs to use phrases such as “at Pitt” or “at the University of Pittsburgh.”

Brown, Peterson and Macadangdang met Friday with Associate Dean of Students and Director of Student Life Linda Williams-Moore and SORC Coordinator Lynne Miller to discuss how enforcement of the policy will affect student organizations. Both parties described the meeting as “open” and “productive.”

Brown said the focus of the task force’s first meeting is to discuss proposed solutions to the guideline changes, including his own to create a third tier of student organizations, lying somewhere in between independent and sponsored.

“At this first initial meeting, what we’re trying to do is kind of understand more or less how responsive these organizations would be to a tiered system,” Brown said, “as well as some of the solutions we came up with in terms of changing registration information and kind of getting a gauge of where they are in terms of what they would be willing and unwilling to do.”

“If organizations are on board for this part of the plan, the best thing would be to work with our judicial committee and kind of get a gauge for how other universities are doing it and how that can be more directly applied to the University of Pittsburgh,” Brown said.

Brown said once the task force decides on a solution to move forward with, it will prepare and submit a report to Vice Provost and Dean of Students Kenyon Bonner.

“Once all of that is set in place it’s just about writing the proposal, which if we have all the research and we have student support on that, it should be the easy part of the process, but it is just going through these steps that we are predicting might take more time and that’s why we’re working as fast as possible,” Brown said.

Viljaste added that the CGR Committee plans to hold the following events as part of Civic Engagement Week: