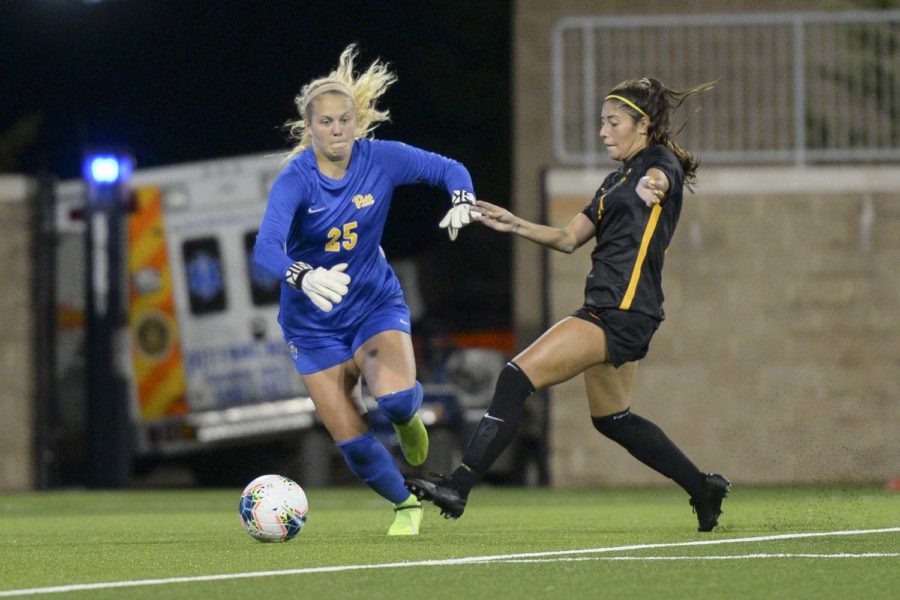 In a game that was largely uneventful — to the point that an appearance by Pittsburgh Steelers All-Pro wide receiver Juju Smith-Schuster was the main highlight — the Pitt women’s soccer team came up short, 1-0, to VCU at Ambrose Urbanic Field Thursday night.

The Panthers (3-3-1) were outshot by the Rams (5-1-1) Thursday night 17-5, but only four of those shots were on goal. This loss ends Pitt’s two-game winning streak after the team drew against Rhode Island last Friday and beat St. John’s 2-0 on Sunday.

Pitt head coach Randy Waldrum discussed how the team wasn’t able to possess the ball and get players forward as in the previous two games. He also said his team ended up in a “kick-ball” game with VCU, meaning they were unable to get into a scoring rhythm.

“I think kind of what you saw is a veteran team against a group of young freshmen, you know,” Waldrum said. “I think that was the difference.”

The first half saw both teams stay level, with VCU taking charge initially before allowing Pitt some chances later on.

VCU’s first shot of the game came off the foot of senior defender Sussana Friedrichs in the sixth minute, but sailed high. About two minutes later, the Rams had another chance from sophomore defender Lana Golob, but Pitt first-year goalkeeper Caitlyn Lazzarini came up with a clutch save in her second start of the season.

The Rams followed with two more shots, one by junior midfielder Karen Lohrmann in the 17th minute and the other by senior midfielder Alyssa Talent in the 18th minute, but both were blocked.

In the 22nd minute, both Talent and Rams redshirt junior defender Tori Browne had shots blocked consecutively as Lazzarini continued her strong night. Browne had another shot a minute later which went wide right.

The game slowed down for a bit until Pitt finally got its first scoring chance of the game in the 35th minute. After a bad pass from VCU, sophomore forward Anna Rico got the ball and ran toward the goal — taking a shot just outside the box as the ball threatened to creep into the bottom left corner. But it went too wide, setting up a VCU goal kick.

The Panthers got another chance shortly after, when first-year defender Athalie Palomo took a shot from outside in the 36th minute. It went straight into the hands of Grace Young — VCU redshirt sophomore goalkeeper — for an easy save.

Pitt faced 10 shots from VCU in the first half while only putting forth two of its own. Both teams only had one shot on goal, proving that VCU had trouble getting any good shots at all.

The Panthers went right back into attack mode as Rico got the ball upfield on the right side and crossed it into the box, where it was cleared out by Browne in the 47th minute.

Another chance for Pitt in the 49th minute saw junior defender Aideen O’Donoghue find first-year midfielder Anna Bout wide open. Bout turned onto her left foot and took a longer shot from outside the box, which ended up going straight at Young in goal.

Browne had the first real chance to score for the Rams in the 59th minute, as a free kick from far out almost went in past Lazzarini for a goal. Lazzarini managed to get her hands on the ball, keeping the game scoreless. Redshirt junior Emily Kershner had a chance shortly after Browne, getting a poke-shot in the box that fell again into Lazzarini’s gloves.

Kershner had the next two chances for VCU in the 64th and 65th minute — a blocked free kick and a wide header. She also set up a shot in the 74th minute for junior defender Paige Franks, which was also blocked.

In the 80th minute, the Rams finally broke through, scoring their first and only goal. Lohrmann had enough space on the right side and delivered a cross that sailed over Lazzarini and right to junior midfielder Samantha Jerabek, who headed it in.

VCU could’ve made it 2-0 in the 84th minute following a cross from Jerabek that connected with junior forward Cici Fox, who instead headed it way high over the goal.

The Panthers did everything in their power to come back in the final five minutes. O’Donoghue had the best chance to level the score in the 88th minute, as she received the ball in the box — but her shot went high over the goal.

Another chance came in the 89th minute when first-year forward Sydney Marasco took the ball and moved down the right side, but ended up delivering a weak cross that was easily trapped by Young.

“We just got to get back to our possession-oriented game,” Vasquez said. “Connecting passes, having our backfield be able to link the backline to the frontline and going at players once we get into the attacking third, really making their outside backs uncomfortable and taking it to them the entire game.”

The next game for the Panthers will be their final non-conference game before ACC play, 1 p.m. at Liberty this Sunday. Going into the next game, redshirt senior midfielder and Captain Juliana Vasquez said they weren’t able to establish great possession at all, but that they were able to hold their own against a veteran team.