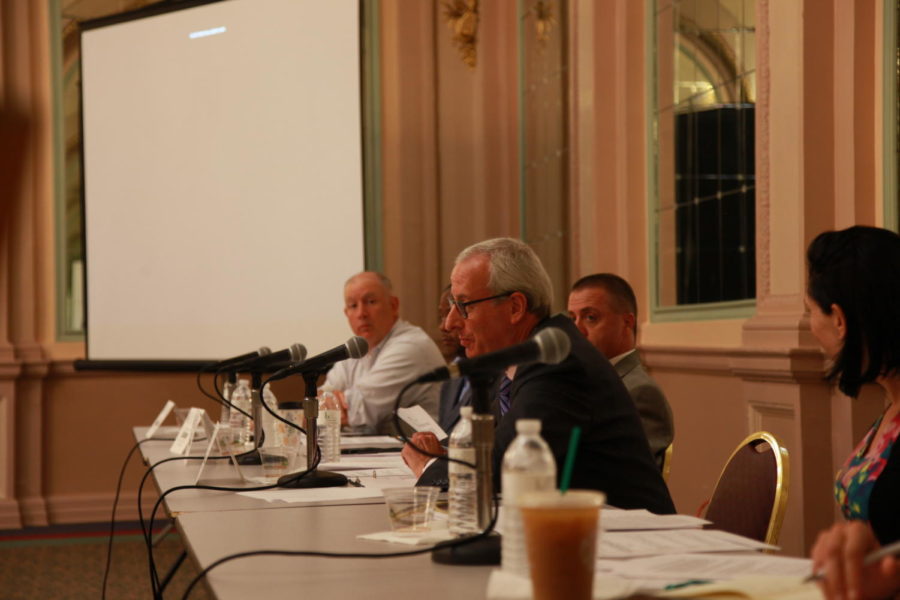 As president of the Pennsylvania chapter of American Academy of Pediatrics, Dr. Deborah Moss has placed children at the forefront of her professional life. So when she treated a child for a grazing bullet wound recently — one of many such wounds she’s treated throughout her pediatric career — Moss said she thought about the failure of legislation to prevent such incidents from affecting children.

“He couldn’t sleep anymore, he was afraid to go back to school,” Moss said. “As public policy people, it’s important to think about what we can’t see.”

Moss, a pediatrician at Children’s Hospital of Pittsburgh, was one of several speakers at Friday morning’s House Democratic Policy Committee hearing, hosted by State Rep. Dan Frankel, D-23, in the William Pitt Union ballroom. The hearing, which focused on “the public health epidemic of gun violence,” featured medical professionals, crime data experts and local community leaders, each of whom gave a different take on the multifaceted issue of gun violence.

Friday’s meeting, attended by about 20 members of the public, centered on HB1075, a bill that seeks to establish a process for obtaining extreme risk protection orders, which allow for legal proceedings to bar at-risk individuals from possessing firearms. ERPOs, or red flag laws, have been enacted in 17 states and Washington, D.C.

The event was divided into three panel sessions, each with a different theme based on the expertise of the speakers. After testimony by the experts, local leaders, including Frankel, the representative for Oakland, Greenfield and Squirrel Hill, asked follow-up questions to gain further insight into the issues at hand.

Joining Moss among medical professionals were Dr. John Rozel, a psychiatrist at UPMC’s Western Psychiatric Hospital, and Dr. Raquel Forsythe, director of trauma at UPMC Presbyterian. Each gave testimony explaining that treating the victims of gun violence takes an emotional toll on patient and doctor alike.

Rozel advocated for the bill, noting that though there does not yet exist standard language for laws allowing ERPOs, the bill’s phrasing is in line with guidelines set by the American Psychiatric Association taskforce. But among his recommendations for strengthening the bill were amendments to explicitly include stalking and harassment as behavior to get an ERPO and permissions for medical professionals to petition for ERPOs. He said his support for the bill stems from a desire to improve public health.

“We are anti-gunshot wound, not anti-Second Amendment,” Rozel said.

Heath Johnson, the crime analysis coordinator for the crime analysis unit at the Pittsburgh Police Bureau, contextualized the national gun violence conversation in terms of local data. He noted that gun violence has actually decreased in Pittsburgh, albeit modestly. Pittsburgh saw 71 gun homicides in 2014, while only 26 gun homicides have occurred in 2019 to date — a 37% decrease relative to the five-year average.

“It is in this context that the Pittsburgh Bureau of Police has been ambitious in its desire to address the ongoing incidents of gun violence, that, while fewer in numbers, remain a scourge to the victims and family members and communities touched by such violence,” Johnson said.

He emphasized that the decrease in homicides cannot be attributed to a single policy — rather, it’s the result of a multi-pronged approach that includes policies such as the Gun Violence Intervention squad, which increases between police officers and community members in an effort to reduce gang violence, and ShotSpotter, a new technology that allows police officers to pinpoint the precise location of a gunshot within seconds.

“Too many people have experienced the pain of losing someone to gun violence,” she said.

Among the initiatives she’s worked on in City Council is a package of laws introduced by her and councilperson Corey O’Connor in the wake of the Tree of Life shooting last year. These laws ban the use of “assault-style weapons” and increase local funding for gun violence prevention initiatives.

In parallel with gun control laws, she advocated for measures that would attack root causes of gun violence, including measures that increase school funding and provide easier access to affordable housing. These policies, she said, should be a top priority for state and local governments.

“Although we might be closer than we have been in a while to seeing some policies passed in Congress,” Strassburger said, “it’s cities and states where the majority of gun-sense policies are moving forward.”