Halftime Update: Pitt and Penn State draw even at 10 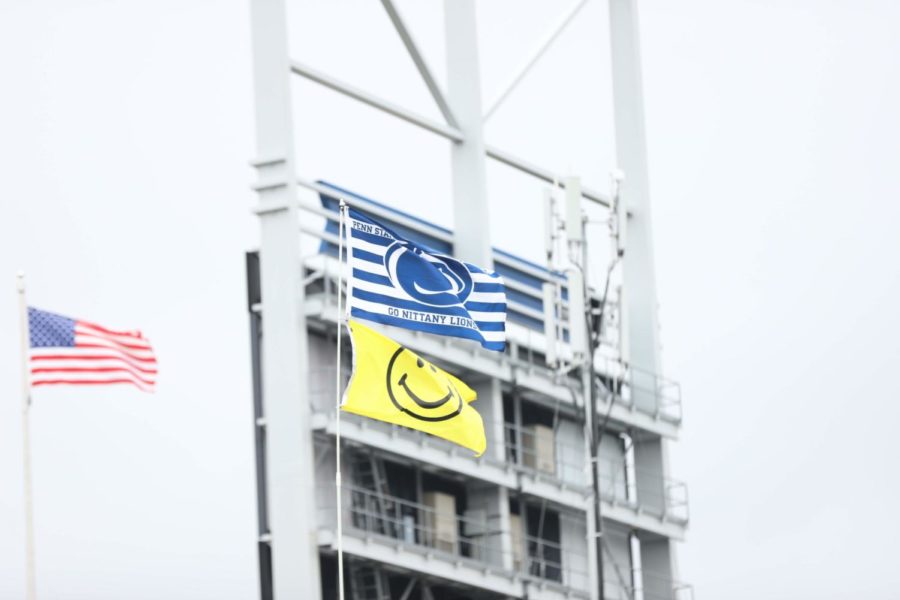 After getting shut out in the first quarter, Pitt turned in an exceptional second quarter to go into halftime 10-10 against Penn State at Beaver Stadium.

It was a tale of two quarters for Pitt football in the first half of its 100th and possibly final matchup at in-state rival Penn State. After getting shut out and outgained 172-66 yards in the first quarter, the Panthers flipped the script and tacked on 10 points in the second quarter while outgaining the Nittany Lions 147-49.
Pitt’s first offensive drive did nothing to silence the Beaver Stadium crowd. The Panthers gained three yards on three plays, and redshirt sophomore punter Kirk Christodoulou booted the ball 46 yards downfield for Penn State to take over on its own 26 yard line.

The Nittany Lions looked to be stringing together a successful scoring drive, with redshirt sophomore quarterback Sean Clifford completing a 16-yard pass followed later by a 13-yard scramble, both for first downs. But Pitt dialed up a timely blitz on 2nd and 10, and redshirt junior linebacker Phil Campbell III burst through the line untouched to deliver a crushing blow on Clifford, who fumbled. Penn State recovered but couldn’t stalled out from there and punted two plays later.

Facing a 3rd and 11 on its own 12, Pitt nearly managed to score the game’s first touchdown. Junior quarterback Kenny Pickett dumped the ball off to junior running back AJ Davis, who got a few blocks and turned on the jets down the right sideline. But he couldn’t quite separate from Penn State’s defense, who caught up with him after a gain of 48 at the 40 yard line. Pitt couldn’t make any progress after that and was forced to punt.

Christodoulou pinned Penn State at its own 2 yard line, but Pitt’s defense failed to take advantage. Redshirt sophomore running back Journey Brown found a crease on 3rd and 9 and zipped past Pitt’s defense, only running out of steam after 85 yards. With prime scoring position at the Panther 12, Penn State scored three plays later on a one-yard rush from first-year running back Devyn Ford.

As has been the case so far in the young season, Pitt’s offense came out looking like the Greatest Show on Turf in the second quarter. The Panthers strung together a gorgeous 18-play, 85-yard drive that included six first downs and only stalled out at the Penn State 7 yard line. Pickett looked in control throughout, completing 12 of 13 passes for 67 yards. Redshirt junior kicker Alex Kessman converted the 25-yard field goal attempt to make the score 7-3 with 6:29 left in the second quarter.

After forcing a three-and-out, Pitt got right back to work starting at its own 22. Pickett again operated the offense with surgical precision, at one point completing consecutive passes of 11, 17 and 27 yards. True freshman Vincent Davis was also instrumental out of the backfield, taking a carry for eight yards early in the drive. Narduzzi called upon him with Pitt facing a 2nd and goal from three yards out, and the shifty back didn’t disappoint. Vincent Davis somehow evaded a wall of blue-and-white defenders at the goal line to put Pitt up 10-3.

Facing a 3rd and 8 on its next drive, Penn State finally broke out from its offensive slump. Clifford found sophomore running back Ricky Slade on a seam route up the middle for a 40-yard gain as the Nittany Lions tried to piece together a scoring drive just before halftime.

Pitt’s defense came up with some crucial pressure on Clifford once again, sacking him for a loss of eight with Penn State threatening from the 31. The sack knocked them to the very outskirts of field goal range, but redshirt junior kicker Jordan Stout proved to be up for the challenge. He squeaked a 57-yard field goal — the longest in Penn State history — just past the front upright to tie the game at 10 apiece at the end of the half.