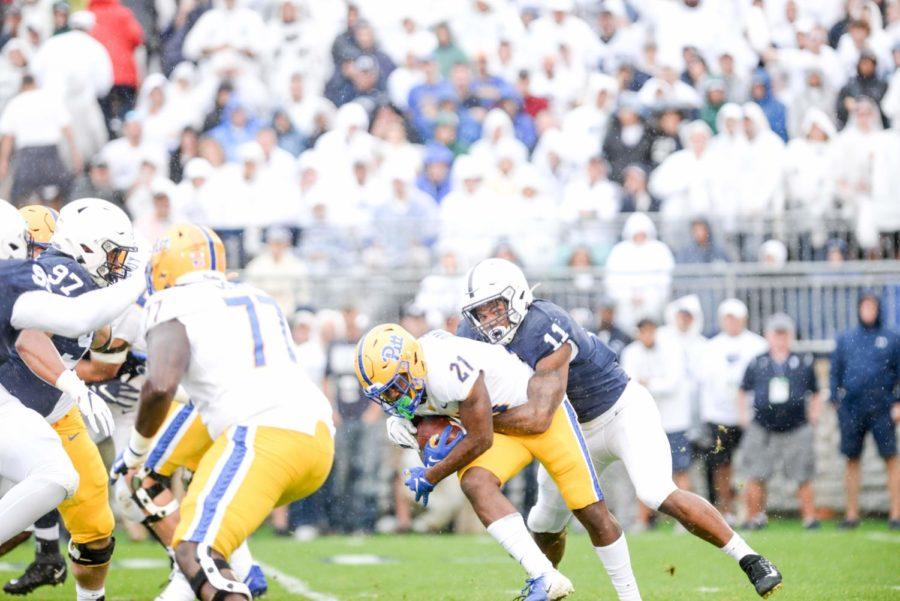 Junior running back AJ Davis is tackled in the backfield.

UNIVERSITY PARK, Pa. — In a series of head-scratching play calls that may haunt head coach Pat Narduzzi — and Pitt fans — for years to come, the Panthers failed to capitalize on four straight plays from inside Penn State’s 1-yard line that would’ve tied the score at 17 late in the game. Instead, Pitt lost 17-10 in its 100th — and possibly last — game against No. 13 Penn State at Beaver Stadium on Saturday afternoon.

First, there was Narduzzi’s decision to not give the ball to his running backs or attempt a quarterback sneak on Pitt’s first three downs. He justified this by pointing out that the Panthers had almost no success running the ball all day — their leading rusher, sophomore Shocky Jacque-Louis, had nine yards on one carry.

“Just looking at the success we had running the ball today — that front seven, we didn’t have much success,” Narduzzi said. “Again, we can look back at all the calls, guys. All the armchair quarterbacks, you guys all have those armchair desks — it’s easy to make those decisions.”

Next was the choice to settle for a field goal after three failed touchdown tries. Pitt trailed by seven with 4:54 remaining at the time. Narduzzi explained that he wanted the Panthers to score twice for the win rather than once for the tie.

Redshirt junior kicker Alex Kessman’s 19-yard field goal attempt would miss, though the Panthers would get another chance to tie the game in the final two minutes. Pitt advanced to the Penn State 28-yard line, but junior quarterback Kenny Pickett’s final Hail Mary attempt was batted away to seal Pitt’s loss and prevent the Panthers from tying up the renewed four-game series.

Though the score didn’t show it, Pickett was mostly incredible throughout the game, following up last week’s Ohio performance with another career day. He set new career highs with 35 completions on 51 attempts for 372 yards.

“I feel like I always learn more from a loss than I do from a win. When it’s things like this, you want to find ways you can just get better,” Pickett said. “There’s definitely positives that we can take away as an offense and that I can take away myself.”

This week it was redshirt junior receiver Taysir Mack who proved to be Pickett’s favorite target, reeling in a career-high 12 catches — including several tough ones on Pitt’s final drives — for 125 yards.

On the other side, Penn State redshirt sophomore quarterback Sean Clifford went 14-30 for 222 yards. Redshirt sophomore running back Journey Brown led the Nittany Lion rushing attack with 10 carries for 109 yards.

For the third straight game, Pitt failed to score a touchdown in the first, third and fourth quarters. The Panthers scored all ten of their points and gained 147 of their 396 total yards in that frame. Penn State, meanwhile, gained 389 yards in the game.

Pitt’s first offensive drive did nothing to silence the Beaver Stadium crowd. The Panthers gained three yards on three plays, and redshirt sophomore punter Kirk Christodoulou booted the ball 46 yards downfield for Penn State to take over on its own 26-yard line.

The Nittany Lions looked to be stringing together a successful scoring drive, with Clifford completing a 16-yard pass followed later by a 13-yard scramble, both for first downs. But Pitt dialed up a timely blitz on 2nd and 10, and redshirt junior linebacker Phil Campbell III burst through the line untouched to deliver a crushing blow on Clifford, who fumbled. Penn State recovered but couldn’t recover from there and punted two plays later.

Facing a third-and-11 on its own 12, Pitt nearly managed to score the game’s first touchdown. Junior quarterback Kenny Pickett dumped the ball off to junior running back AJ Davis, who got a few blocks and turned on the jets down the right sideline. But he couldn’t quite separate from Penn State’s defense, who caught up with him after a gain of 48 at the 40-yard line. Pitt stalled out from there and was forced to punt.

Christodoulou pinned Penn State at its own 2-yard line, but Pitt’s defense failed to take advantage. Brown found a crease on third-and-nine and zipped past Pitt’s defense, only running out of steam after 85 yards. With prime scoring position at the Panther 12, Penn State scored three plays later on a one-yard rush from first-year running back Devyn Ford.

As has been the case so far in the young season, Pitt’s offense came out looking like the Greatest Show on Turf in the second quarter. The Panthers put together a gorgeous 18-play, 85-yard drive that included six first downs and only stalled out at the Penn State 7-yard line. Pickett looked in control throughout, completing 12 of 13 passes for 67 yards. Redshirt junior kicker Alex Kessman converted the 25-yard field goal attempt to make the score 7-3 with 6:29 left in the second quarter.

After forcing a three-and-out, Pitt got right back to work starting at its own 22. Pickett again operated the offense with surgical precision, at one point completing consecutive passes of 11, 17 and 27 yards. True freshman Vincent Davis was also instrumental out of the backfield, taking a carry for eight yards early in the drive. Narduzzi called upon him with Pitt facing a 2nd and goal from three yards out, and the shifty back didn’t disappoint. Vincent Davis somehow evaded a wall of blue-and-white defenders at the goal line to put Pitt up 10-3.

Facing a third-and-eight on its next drive, Penn State finally broke out from its offensive slump. Clifford found sophomore running back Ricky Slade on a seam route up the middle for a 40-yard gain as the Nittany Lions tried to piece together a scoring drive just before halftime.

Pitt’s defense came up with some crucial pressure on Clifford once again, sacking him for a loss of eight with Penn State threatening from the 31. The sack knocked them to the very outskirts of field goal range, but redshirt junior kicker Jordan Stout proved to be up for the challenge. He squeaked a 57-yard field goal just past the front upright to tie the game at 10 apiece at the end of the half.

With Penn State facing a third-and-eight on its first drive of the third quarter, Clifford chucked up a deep jump ball between redshirt senior receiver Dan Chisena and junior defensive back Damarri Mathis. Chisena appeared to make a great grab that would’ve given the Nittany Lions field position inside Pitt’s 20. But the refs reviewed the catch and replay revealed that the ball hit the ground. The call was overturned, and Penn State punted on 4th and long.

Penn State got the ball back at its own 12 and proceeded to march down the length of the field on an authoritative 13-play, 81-yard touchdown drive. Pitt had no answer for first-year running back Noah Cain, who carried the ball six times for 40 yards on the drive. His 13-yard touchdown run put the Nittany Lions up 17-10 at the 5:50 mark of the third quarter.

The Panther offense seemed to be gaining momentum on their ensuing drive, converting a third-and-11 and a third-and-15 that moved them out to their own 44. But they couldn’t pick up a third-and-five, setting up a tough call from Penn State’s 48-yard line for head coach Pat Narduzzi — go for it on fourth-and-two or punt. He elected to trust his defense and chose the latter.

Four minutes later, Narduzzi faced a similar decision, this time a fourth-and-one from Pitt’s own 43. After bringing the punt team out, he must’ve realized that Pitt might not have enough time to give Penn State the ball back. Narduzzi called a timeout and brought the offense out. The Panthers faked a run, and Pickett found redshirt senior tight end Nakia Griffin-Stewart wide open for a 36-yard completion down to Penn State’s 21.

Three plays later, Mack made an acrobatic catch at the goal line to put Pitt about 12 inches from tying the game up. The Panthers looked in position to score comfortably, but what followed was a series of questionable calls from Pitt’s coaching staff.

On first down, the Panthers ran a play-action pass. Pickett appeared to have room to run toward the right pylon, but hesitated and ended up throwing the ball out the back of the end zone.

On second down, Pitt came out in the shotgun formation, thus backing themselves up five yards from their advantageous position mere feet from the goal line. Pickett faked to the running back and kept the ball himself, but was stuffed well short of the goal line.

On third down, Pitt again elected to pass. Pickett was pressured and his attempt to AJ Davis fell incomplete.

On fourth down, Narduzzi decided to go for a field goal with 4:54 left in the game. Kessman’s 19-yard attempt hit the left upright, and Penn State took over on downs at their own 20.

Pitt’s defense did its job and forced a Penn State punt, giving the Panthers the ball back at their own 16 with 1:56 to play. Pickett connected with Mack for clutch first-down completions of 21, 28 and 11 yards to move Pitt down to the opposing 26.

With one last play remaining, Pickett heaved a lofty prayer into the end zone. The ball bobbled around for a bit but ultimately hit the turf, sealing a frustrating loss for the Panthers.

“I feel bad for our kids. I love those guys in there,” Narduzzi said afterward. “They’re resilient. We’ll bounce back.”

The Panthers will look to bounce back next week when they host No. 17 Central Florida at 3:30 p.m.