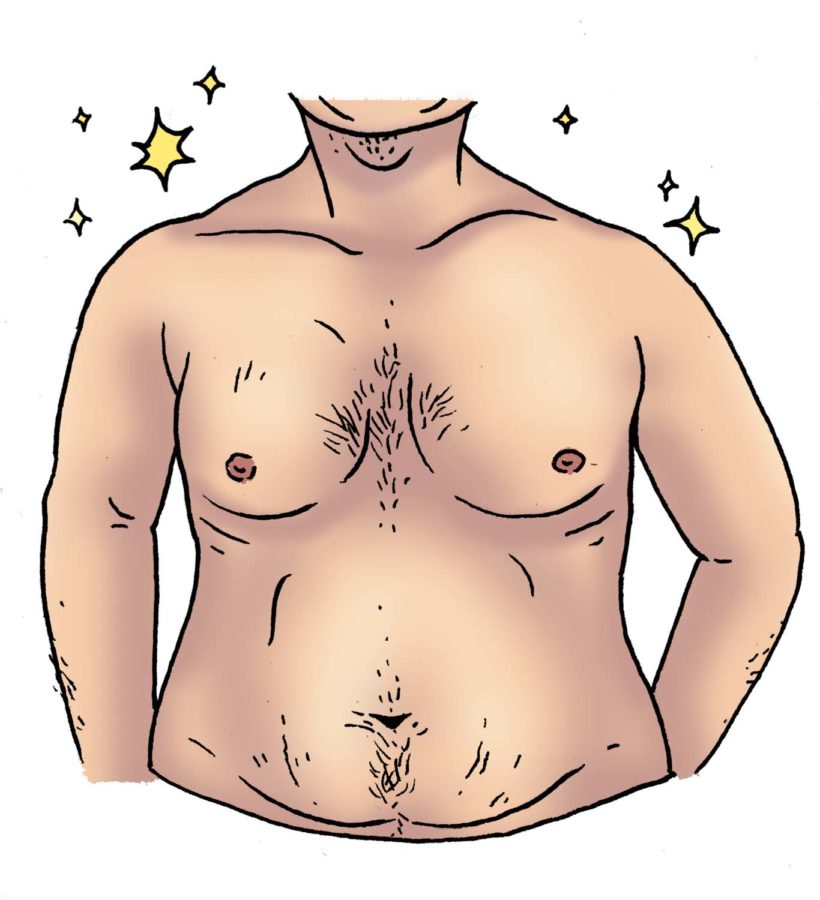 By Paige Lawler, For The Pitt News

Since its founding in 1996, the body positivity movement has gained popularity, growing from a single organization to an international movement — but it’s still missing a crucial demographic.

Founded by two women, the movement aims to create a community that embraces bodies of every size and is free of toxic societal messages about appearance. According to the official website, body positivity is “a way of living that gives you permission to love, care for, and take pleasure in your body throughout your lifespan.” This mission has certainly helped women accept and enjoy their bodies, but men have been largely left out of the movement.

Body positivity has gained popularity in recent years as celebrities, brands and individuals encourage women to love their bodies and ignore societal pressures to look a certain way. Notably, actress Jameela Jamil began advocating for body positivity by encouraging women to ditch the scale and instead “weigh” themselves in traits they love about themselves.

However, this growth still mostly excludes men. The search results online for “body positivity” results in content that is almost entirely focused on and written for women, while there are far fewer articles focused on male body positivity. Male representation is also slim when it comes to leadership in the movement — as only two of the eight directors of The Body Positive organization are men.

Excluding men from the body positivity movement is harmful in part because men are subject to standards of appearance that are just as unrealistic as those imposed on women. Many men succumb to the pressure of achieving the “superhero body.” In order to achieve this aesthetic, they risk the damaging physical effects of overexercise — including a mortality rate that is equal to that of individuals who lead a sedentary lifestyle.

An individual’s body image begins to develop at a young age, and can be negatively influenced by external factors such as unrealistic media standards and criticism of physical appearance. If men were able to see other men with “less than perfect” bodies who loved and accepted themselves, they might not be so focused on achieving an impossible body type and would improve their own body image and confidence.

In addition to insecurities about physical appearance, men are also subject to body shaming, especially during adolescence. Andrew Walen, a psychotherapist who specializes in eating disorders and founded the Body Image Therapy Center, explains the trends and consequences of body shaming amongst peers.

“Boys who are heavier are often bullied, and a good number of them will develop anxiety, shame, and depression related to this,” Walen says. “Behaviors done to change their body to meet the standard they think is ideal — typically one that is more lean and muscular — can become a full-blown eating disorder, which is the deadliest mental illness there is.”

Eating disorders are much more common in men than one may think. Men make up about one third of individuals battling an eating disorder, though only a minority receive treatment. It may be even harder to diagnose a man with an eating disorder as the disease does not manifest the same way it does in a woman.

According to the National Eating Disorder Association, women might be concerned mainly with losing weight to be as thin as possible, while men are more likely trying to increase muscle mass. They often achieve this goal through drastic means involving overexercise, militant tracking of macronutrients and use of steroids. This drive is interpreted as passion for fitness, causing these dangerous behaviors to be dismissed.

It is also important to note that representation of men in the body positivity movement must include more than simply heterosexual, cis-gendered men. Representation of different male body types is especially important for the LGBTQ+ community, as men with minority gender and sexual identities are statistically more likely to have negative body images. This is due to the overrepresentation of a lean and muscular body type in LGBTQ+ media.

Encouraging this specific standard is harmful for transgender men as they oftentimes feel uncomfortable in their bodies, even without the looming societal expectation of what a man should look like. Representation of multiple body types would help remedy this by showing men that they are not an anomaly — they are valid and should feel comfortable in their own skin.

The drive to achieve a “perfect body” could be significantly lessened by appropriate representation of different male body types in the body positivity movement. If men can learn to recognize the beauty and value in their own bodies, they would feel less pressured to reach a certain standard of physical appearance.

We live in a diverse society, and this ought to be reflected in the body positivity movement. Increasing men’s representation in this movement will surely be a process, but the benefits for men’s confidence and body image are well worth it.