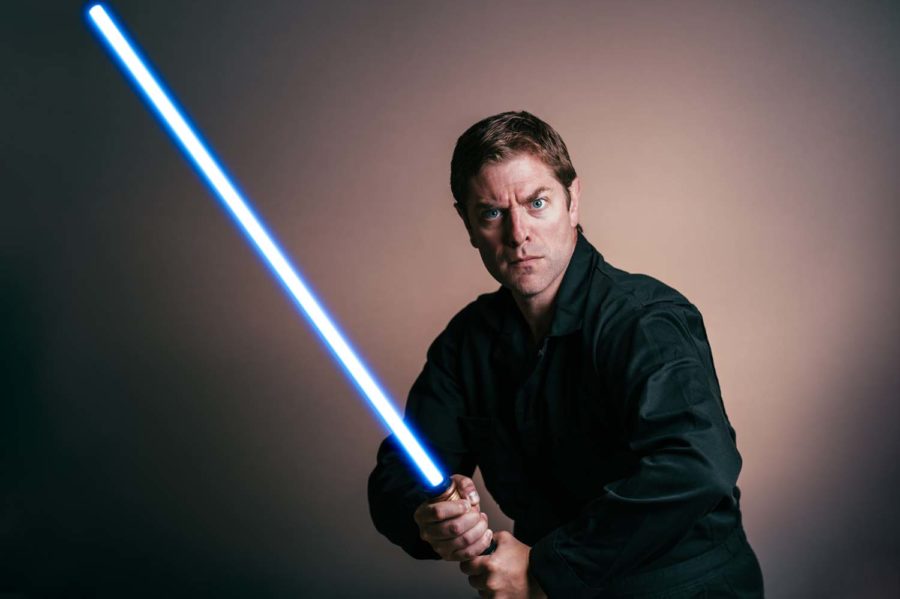 Charles Ross is the leading man in the “One-Man Star Wars Trilogy.”

By Charlie Taylor, For the Pitt News

If you’re the kind of person who binge-watches the entire original “Star Wars” trilogy in a weekend, consider buying a ticket to Charles Ross’ “One-Man Star Wars Trilogy” before sitting down for your next productive weekend. You’ll save yourself a whole lot of time, and enjoy an unexpected laugh or two.

The show — which Ross has performed around the world since 2001 — runs through Sept. 29 at the Greer Cabaret Theater in Downtown, and tells a familiar story in a delightfully unconventional manner.

As Ross explains at the very end of his performance, the show comes as a direct result of his childhood love of the “Star Wars” franchise — some of the few movies he watched growing up in rural Canada — combined with his need for new material to add to his stand-up comedy routine, which was largely unsuccessful before this show. He originally performed it without director George Lucas’ permission, until it grew in popularity and the production company approached him about continuing with official licensing rights.

Ross acts out all three of the original “Star Wars” movies with only his own body and voice. Lighting cues help indicate scene changes and add effect to the occasional explosion, but Ross forgoes any props, set or costuming in his performance. Dressed in a black janitorial jumpsuit and practical footwear and armed only with a microphone, he allows his skills in voicework, miming and sound effects to speak for themselves.

The result is an irreverent and whimsical take on a beloved sci-fi classic. Ross bounces between characters, delineated by changes in voice and posture that venture into the cartoonish. To play Princess Leia, he adopts a high-pitched voice and holds his hands to his ears to indicate of her iconic hairstyle. To portray Yoda, he hunches over and mimes leaning on a stick.

The play packs hours of plot into more than 70 minutes, creating a sequence of action so fast-paced that at points it becomes hard to follow. Ross seems aware, however, of when the audience’s attention may be waning, and takes a break from the action every few minutes to let a joke play out. The crowd has just long enough to rest before he dives again headfirst into his reenactment.

The show’s charm emerges from this self-awareness. Ross offers refreshing self-deprecation, from breaking the fourth wall to poke fun at his own impressions, to pointing out the volume of spit flying from his mouth when he makes sound effects.

At times, he interjects to verbally explain motions that may read unclearly. As he mimics Luke Skywalker in the beginning of “A New Hope,” he flattens his hair against his forehead and utters the words “feathered hair” to the tune of the series’ iconic main theme. At another moment, while trying to vaguely mime the shape of the Death Star, he verbally clarifies that he is, in fact, the Death Star in that moment.

These interjections appear to come not as a result of Ross’ inability to physically express his point, but as a result of an awareness of the sheer absurdity of his work, and a willingness to laugh at it.

Similarly, he pauses between each episode, breaking from the high-energy, multi-faceted persona he adopts as an actor to tell personal anecdotes, talking to the audience as a fellow human and “Star Wars” fan.

Ultimately, “One-Man Star Wars Trilogy” doesn’t pretend to have real universal appeal. Anyone trying to watch it without first having seen “Star Wars” numerous times over will find him or herself utterly lost, a fact which Ross himself stated when bantering with members of the audience. The show relies on inside jokes and obscure references, but in doing so creates real connection with the crowd.

These inside jokes, however, achieve varying levels of success. Some rely too heavily on common pop cultural references, and as a result feel overplayed. Nowhere is this more evident than in Ross’ play on Admiral Ackbar’s over-referenced “It’s a trap!” line in “The Return of the Jedi,” which serves as one of the central jokes of the whole show.

Maybe the joke was new when the play was written 18 years ago, but its appearance now undoes Ross’ otherwise successful efforts to put a fresh twist on an old favorite. His clever takes on Luke’s moodiness and Lando Calrissian’s cocky mannerisms threaten to be overshadowed by something that “Star Wars” fans have already seen time and time again. Still, his delivery — including the way he giggles at himself, just slightly breaking character — proves almost endearing enough to reverse the staleness of the joke itself.

Ross closes his show by recalling one powerful moment when, during one of his first performances, he saw a rowdy bachelorette party in the audience. He assumed his nerdy jokes would flop with the group, but soon found that they sent the young women into hysterics.

The story speaks to the very purpose of “One-Man Star Wars Trilogy.” In it, plot becomes irrelevant, as does universality. Each takes a back seat to the play’s real purpose — the establishment of a communal experience between fans, akin to a movie festival or comic book convention. Watching this piece is like going to a comic con for people with aversions to large crowds and elaborate costumes.