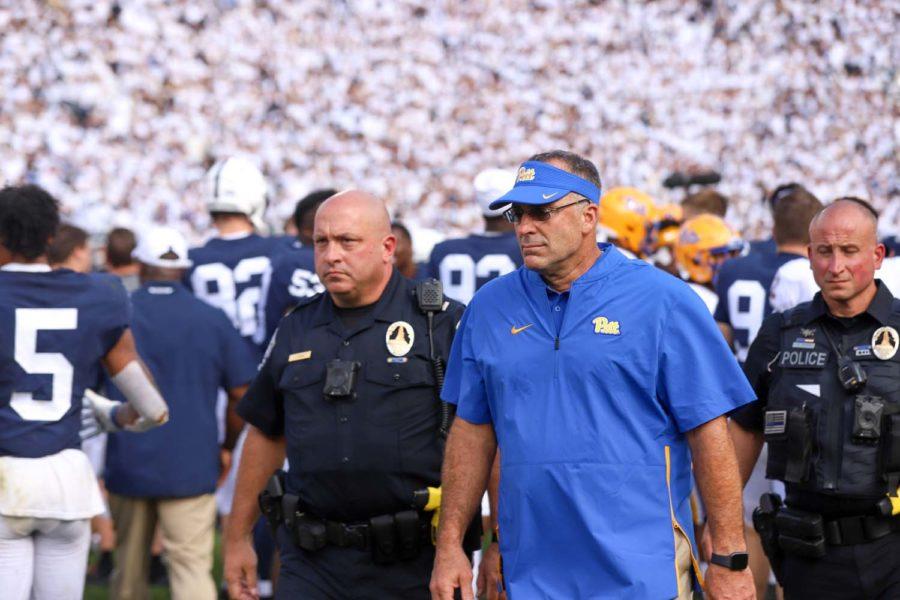 As much as Pitt head football coach Pat Narduzzi would’ve liked to look ahead to Saturday’s game against Central Florida, he knew he’d have to answer questions about his late-game decision-making in last Saturday’s loss at Penn State. He beat reporters to the punch in his opening statement at Monday morning’s weekly press conference, acknowledging — and doubling down on — his controversial choices to pass the ball on two of three downs, then attempt a field goal down seven on the 1-yard line.

“But again, the thinking and the logic, guys, is I have no regrets with the call at all. I really don’t,” Narduzzi said. “I thought we had the plays, and we just didn’t do it right.”

With one final statement, Narduzzi tried to shut the door on Penn State and move on to the next game.

“Enough of that, but it’s what it is, and we can debate it for the next 10 years and maybe we will because we probably won’t play them the next 10 years,” he said. “I apologize to Panther Nation because we all wanted to win that game, and there’s nobody that feels worse about that than the guys in this room.”

No. 15 UCF (3-0) is certainly an opponent worth focusing on, considering the Knights have won 27 regular season games in a row dating back to 2017. UCF’s high-octane offense routinely ranks among the nation’s top units — this season, they sit at No. 5 in total offense with 559.5 yards per game.

“Central Florida, Coach Heupel, they’ve got a great football team. They haven’t lost a regular season game since 2016, so if you think we’re thinking about anything else except that, you’re crazy,” Narduzzi said. “They’re explosive, they’re fast, they’re going to snap the ball within seven to 12 seconds, a lot of them under 10 seconds.”

Narduzzi singled out UCF first-year quarterback Dillon Gabriel for praise. Through three games, Gabriel has thrown for 719 yards, nine touchdowns and no interceptions. Narduzzi compared him to former UCF quarterback McKenzie Milton, who lit up the Panthers last season for 328 yards and four touchdowns last season before suffering a gruesome knee injury late last season. Both Gabriel and Milton hail from Hawaii.

Narduzzi pointed out that the Knights have a great advantage, being located — as the name says — smack-dab in the middle of Florida, which is routinely one of the nation’s top talent-producing states for football. Conveniently based in Orlando, UCF has carved out a portion of the recruiting areas that typically went to Miami, Florida and Florida State.

“They’re explosive, and there’s a reason they’ve won,” he said. “They’re sitting in a hotbed of players down in the state of Florida. For all those voters out there, it’s no fluke.”

Pitt has also established its own Florida pipeline — the Panthers have 19 players who attended high school in the Sunshine State. That includes first-year running back Vincent Davis, who has already secured a meaningful role in Pitt’s backfield and hails from Fort Lauderdale. But for every “Davis” that Pitt has, Narduzzi noted that Central Florida has several of the same caliber player.

“It’s called of state of Florida, okay, and it’s one of the reasons we go down there and recruit. You look at a Vince Davis you can pull out of there, they’ve got a bunch of Vince Davises down there,” he said. “They’re in the backyard, they’re all coming to camp. It’s population. It’s playing the sport year-round. It’s an advantage down there.”

When asked if he’d like to continue some sort of non-conference rivalry with a Florida team, Narduzzi was dismissive, saying the best rivalries are those where fans of each team can drive to the game. The comment not-so-subtly alluded to the fact that the Pitt-Penn State game has no rematches for the foreseeable future, though Pitt will at least renew its regional rivalry with West Virginia in 2022.

“I’d rather do it with some local team, to be honest with you, and keep it in our backyard … I don’t know how many people are coming up from Florida for the game, but I’d rather keep it where someone can drive and get to a game as opposed to going all the way down there,” he said.

Pitt and UCF will kickoff at 3:30 p.m. Saturday at Heinz Field.