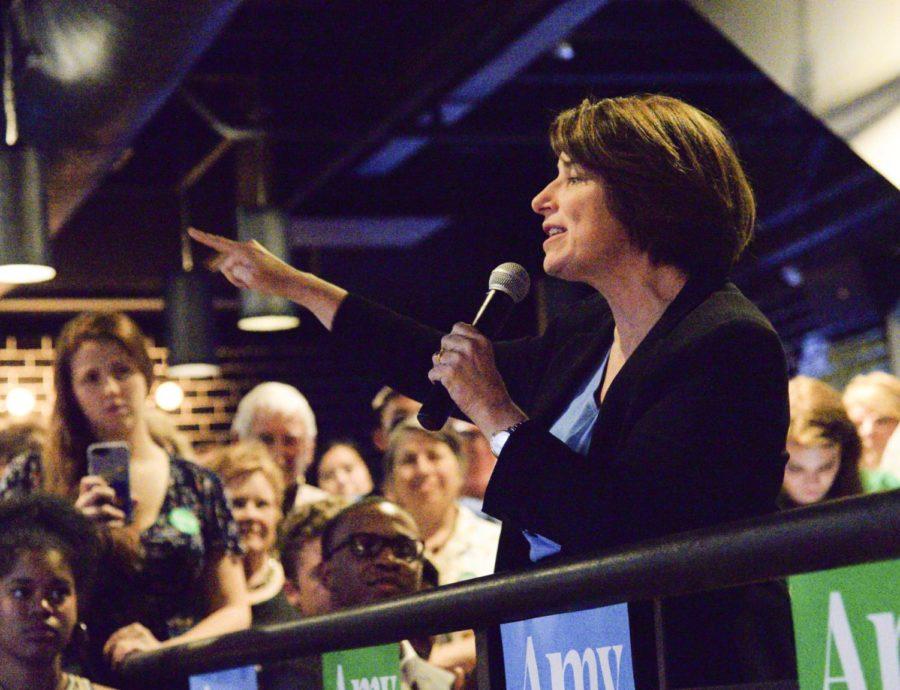 By Rachel Romac, For The Pitt News

Sen. Amy Klobuchar entered Stack’d Burgers and Beer with a strong smile and wave, to chants of “Amy! Amy! Amy!” from the bar area and the sidewalk next to the restaurant.

On a warm fall Wednesday night, Pitt students, faculty and members of the public packed the tables and sidewalks — and spilled out onto the sidewalk at the corner of Forbes and Oakland avenues — to hear Klobuchar, D-Minn., make her pitch to become the next president of the United States.

Klobuchar is one of 20 Democrats currently running for president. Pitt College Democrats President Grace DuBois, who organized the visit, said she and her organization have worked hard over the past two weeks to bring Klobuchar to Oakland. She received an email from Klobuchar’s campaign on Sept. 6 about hosting an event for Pitt students.

“The process was a little more complicated than we had hoped,” DuBois said.

Requests to reserve space for an event on campus must be made at least 21 days in advance — but the College Democrats had only 12 days to put together Klobuchar’s visit, requiring the move to an off-campus location. Though she’s polling at an average of just 1.4%, Klobuchar’s visit was widely attended — 45 minutes before the event began, every seat in Stack’d was taken, leaving a standing-room only crowd. But Pitt students weren’t the only ones in attendance.

Sandra Duncan, 59, and her friend Barbara McNulty, 62, waited excitedly with their Stack’d fried pickles for the event. The two women — both from Wexford, located about 30 minutes north of Oakland — said they were attending to see Klobuchar in person and to hear her stance on health care and the climate crisis.

“I like her message … and see her fully capable as President,” Duncan said. “[This country] needs someone who is calm, centered and clear.”

Klobuchar made a point of separating herself from the seemingly endless line of Democrats competing for the presidential nomination to take on President Donald Trump in 2020. She embraced her midwestern roots, as a 12th year senator from Plymouth, Minnesota, but said many Americans from rural areas support Trump’s agenda.

Klobuchar said she’s visiting Oakland and western Pennsylvania, along with cities in Wisconsin and Michigan, to try and rebuild support in the so-called “blue wall” states — those that usually vote for Democrats, but flipped in favor of President Trump for the 2016 election.

Klobuchar said her ultimate goal is to win back these states, but also appeal to the states which are swing or consistently Republican.

Proposed solutions to many of the issues Americans hold dear, such as gun control, international relations, the Affordable Care Act and — most importantly for college students — the student debt crisis, were among the topics Klobuchar discussed.

Klobuchar said she hopes to pass a bill to limit magazines, an assault weapons ban and a universal background check bill. She cited how a majority of both hunters and Trump voters support the background check proposal, according to a Fox News poll.

“I look at these proposals in front of us, including the ones at Mitch McConnell’s desk, and I say ‘Does this hurt my Uncle Dick in his deer stand?’” Klobuchar said. “And they don’t.”

Under a Klobuchar administration, the United States would move quickly to restore relations with nations that she believes President Trump has snubbed. She wants to restart conversations with other nations about the climate crisis and negotiate the United States back into the Iranian agreement.

“We stand with our allies, and we get back into these international agreements, and I would mention the international climate change agreement,” she said, “I would sign that puppy in on day one.”

When it comes to health care, Klobuchar is in favor in strengthening and expanding the programs that the government already has under the Affordable Care Act — focusing on lowering health care premiums that stretch Americans’ budgets.

The federal government needs to make college more affordable for new students, according to Klobuchar, like increasing the federal Pell Grant offered to students, along with helping to refinance loans for current students. The crowd whooped and applauded her proposals.

But in addition to mentioning the financial plight of young people, Klobuchar also placed a spotlight on their potential. She credited young voters with many of the Democrats’ recent electoral successes, in flipping the U. S. House of Representatives in the 2018 midterm elections and winning back seats in state legislatures.

“Parkland and those kids that became icons … those students in your generation, they stood up. They didn’t just march, they voted in record levels,” Klobuchar said. “This is the march that we are on that will end in November 2020, and I would love to meet this march.”