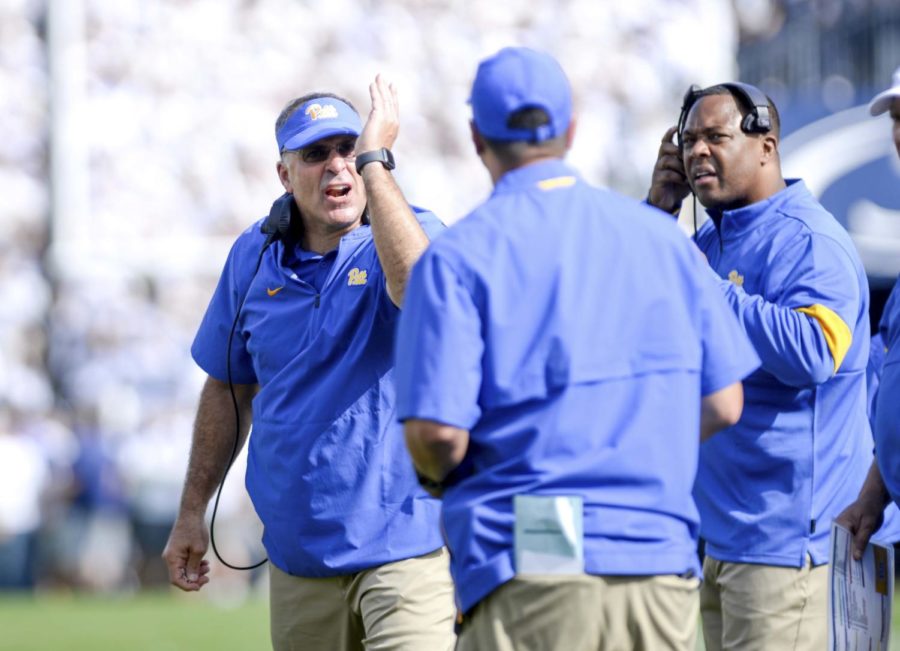 Narduzzi doesn’t regret his decision to kick instead of trying to tie the score in the final quarter vs. Penn State.

By John Riskis, For the Pitt News

Pitt football (1-2, 0-1 ACC) will try to rebound after a frustrating loss against rival Penn State when it plays the No. 15 Central Florida Knights (3-0) at home this Saturday. In their first road game last week, the Panthers struggled down the stretch offensively and missed a 19-yard field goal after a series of goal-line failures late in the game.

Narduzzi came under fire for the decision to kick instead of trying to tie the score, but remained firm in his decision on fourth down.

“I have no regrets with the call at all, I really don’t,” Narduzzi said. “My regret is that we didn’t score on one of those three [previous] plays.”

Despite standing by his decision-making, Narduzzi apologized to Pitt fans for the team’s failure in execution.

“Enough of that, but it’s what it is, and we can debate it for the next 10 years and maybe we will because we probably won’t play them the next 10 years,” he said. “I apologize to Panther Nation because we all wanted to win that game, and there’s nobody that feels worse about that than the guys in this room.”

Yet for all the seemingly negative emotions that stemmed from that single play, there were some positives to take away from the game as a whole. Defensively, the Panthers held Penn State’s typically high-scoring offense to only 389 yards and 17 points. Redshirt sophomore defensive tackle Jaylen Twyman had another impressive outing with six tackles and 1.5 sacks. PSU redshirt sophomore quarterback Sean Clifford had difficulty creating plays from the pocket thanks to the constant pressure of Pitt’s defense.

Time of possession was another highlight for the Panthers, with Pickett leading an 85-yard drive that lasted more than nine minutes but ended with a field goal. Pitt must sustain drives like that this Saturday in order to milk the clock and keep the ball away from UCF’s fast-paced offense.

Looking ahead to Saturday, UCF will be the biggest challenge yet to Pitt’s resilient defense. First-year quarterback Dillon Gabriel has already proved capable of the starting job with nine touchdowns to his name in three games. UCF pummeled Stanford last week, scoring 28 points in the first quarter alone and going on to win 45-28. Gabriel is of particular focus for Narduzzi, who said he reminds him of previous UCF standout quarterback McKenzie Milton.

Narduzzi wasn’t kidding — Gabriel ranks fourth among college quarterbacks in long pass plays, with an average of 11.6 yards per attempt. He threw for four touchdowns against Stanford with three of those coming from at least 28 yards out. UCF’s offensive prowess cannot be understated. The Knights have scored at least 30 points in their last 29 games dating back to 2017 — not to mention that they’ve won 28 of their last 29 matchups.

To emerge victorious this weekend, the Panthers need a combined effort from the offense and defense. We know how good the defense has been up to this point, but Pitt will have to slow down the touchdown-scoring machine that is head coach Josh Heupel’s offensive system. Additionally, forcing turnovers will be important to limit the time spent on the field by the Knights’ offense.

Offensively, Pitt will need to find success consistently, not just in the second quarter. The Panthers proved too predictable against Penn State and couldn’t adjust to counterplay in the second half. Pickett will need another breakout game to compete with a team that frequently lights up the scoreboard.

The Knights’ offense will prove to be too much for Pitt’s defense, with Gabriel getting off to a hot start in the first quarter once again. With speedy playmakers like junior wide receiver Gabriel Davis and junior running back Greg McCrae, UCF has a breadth of talent that will be difficult to beat.

Pickett will pass for more than 400 yards but Pitt will fail to capitalize on drives and stall in the second half. An impressive Panther defense will be outmatched at Heinz Field and fail to stop the passing volley it will face.