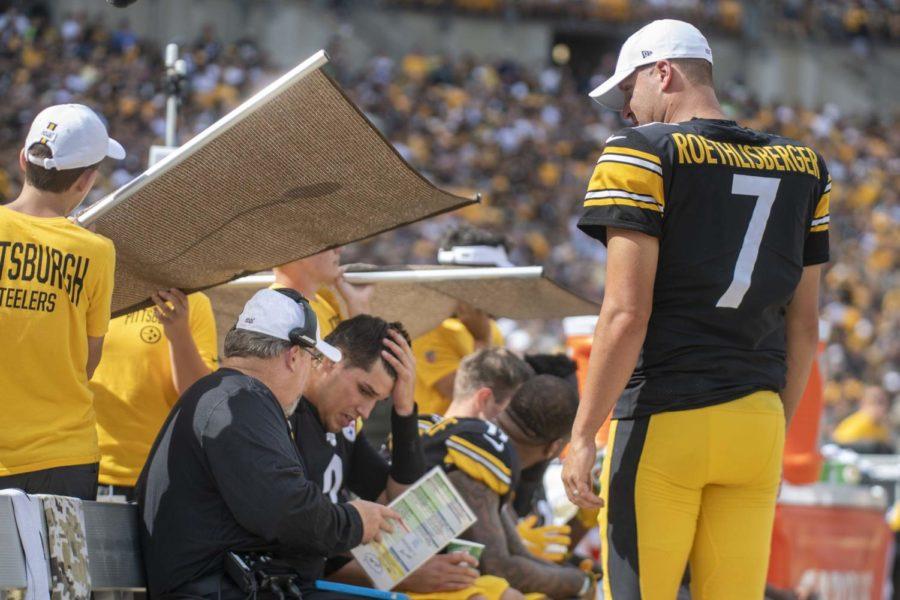 In this week’s column, our staff weighs in on a couple Pittsburgh-related storylines — one hopeful, one bleak — and also shines a light on the incredible career of heavyweight boxer Tyson Fury.

The Pittsburgh Steelers announced on Monday morning that star quarterback Ben Roethlisberger will miss the remainder of the 2019 season with an elbow injury. Monday night, the Steelers sent their 2020 first-round pick to Miami in exchange for standout defensive back Minkah Fitzpatrick. With this trade, Pittsburgh’s front office made one thing abundantly clear — the team still has every intention of winning in 2019.

At just 22 years old, 2018’s 11th overall pick has through-the-roof potential. Last year for the Dolphins, the rookie Fitzpatrick recorded 80 total tackles, nine passes defended, two interceptions and one defensive touchdown. In his second season, Fitzpatrick fills a desperate need for Pittsburgh, as there is now a gaping hole in the secondary with the loss of safety Sean Davis to injury.

Pittsburgh has had lackluster safety play for years. This was evident on Sunday, when Seattle receiver DK Metcalf toasted Pittsburgh’s Terrell Edmunds to put the Seahawks up 28-20. Also, no defensive player had the awareness to contain Russell Wilson’s scrambling ability on the game’s final drive.

Rudolph looked phenomenal in his first NFL action, leading the offense to a 26-point effort. But if the Steelers intend on winning in 2019, they must support Rudolph with playmakers on the other side of the ball that can keep the opposing team’s score down.

Many people believed the Fitzpatrick trade was a bad deal for the Steelers. In reality, the team just made its gutsiest trade in recent franchise history. Pitttsburgh’s major problems are on the defensive side, and the Steelers hope to resolve them with this acquisition. Fitzpatrick will be a fan favorite in Pittsburgh and lead the Steelers’ secondary for years to come. Pittsburgh recognized what they needed to do in order to win and made that move. Now, with a promising young quarterback along with a rejuvenated defense, the Steelers could still be on a postseason trajectory in 2019.

A round of applause for Tyson Fury

Tyson Fury should be an icon in the world of sports right now. The lineal heavyweight boxing champion is 31 years old and currently preparing for his massively anticipated rematch against Deontay Wilder on Feb. 22. The fight is sure to attract a lot of attention, with some calling it the biggest heavyweight fight of the century. One can only hope that it gives Fury the international platform that he deserves.

At the age of 27 in 2015, Fury defeated Wladimir Klitschko and became the unified world heavyweight champion. Unfortunately, this was just the beginning of his story.

What followed Fury’s victory could only be described as a disaster. In the three years after, Fury never stepped foot in the ring again. He was stripped of all his titles for inactivity, and his life fell apart. He fell in deep into alcohol and drug addiction and ballooned up to about 400 pounds. According to Fury’s own account, he was within seconds of taking his own life in the summer of 2016. In the fall of 2017, after years of struggling with his mental health, Tyson Fury made the unbelievable decision to make a comeback. His goal — to win back his former title belts.

Against all odds, Fury successfully regained control over his mental health, kicked the drugs and alcohol and lost about 150 pounds. He returned to the ring in 2018, and just three fights in fought Deontay Wilder for the WBC heavyweight championship — a brawl which ended in a controversial no-decision. Now, less than a year later, Fury is preparing for what is shaping up to be a historic rematch — and another shot at redemption.

Fury’s ability to overcome adversity is as inspiring as any of the “Rocky” movies. It’s stories like his that make people love sports, and boxing’s relative obscurity shouldn’t keep him out of the spotlight.

— Sean Tierney, For the Pitt News

The Pittsburgh Pirates have fallen from their storied history and the future looks grim. There were some expectations for the team this season to play about a .500 record. After some bad luck with injuries and inconsistency, the Pirates pitching staff has been the fourth-worst team by ERA this year. Though the offense certainly has its nights of dominance, it’s still ranked 19th in scoring this season. Add those two together and you get the fifth-worst run differential and a beautiful record of 65 wins and 86 losses.

While there are some bright spots in the lineup, the Pirates just aren’t very good. Going into next year, Pittsburgh’s supposed best pitcher won’t even throw a pitch due to Tommy John surgery, a procedure wherein a player’s UCL is reconstructed.

Last season, the Pirates made a controversial trade when they sent outfielder Austin Meadows and Tyler Glasnow to the Tampa Bay Rays for starting pitcher Chris Archer. The trade at the time was viewed as an acquisition of a strong arm in Archer, but in hindsight the trade turned out poorly. Add in the fact that the Pirates jettisoned Gerrit Cole, who will finish with a sub-three ERA and 300 strikeouts this year. To make matters worse, the Pirates — through no fault of their own — will lose one of the most elite closers in the game due to his arrest this past Tuesday.

Owner Bob Nutting will need to climb many mountains for Pittsburgh’s baseball team to be competitive again. He has to restock a depleted farm system and find quality major league arms for his pitching staff and reliable bats for the lineup. Whether or not there is a major shake-up in the team’s front office, this offseason will determine whether the upcoming years of Pirates baseball will be worth following at all.

The New Orleans Saints will be without their franchise quarterback Drew Brees for at least the next six weeks. Brees sustained ligament damage to his right thumb and will need surgery following a tackle from Los Angeles Rams superstar Aaron Donald.

Saints fans are now panicking after losing Brees and a 27-9 game to the Rams this past Sunday. But I’d advise them to just relax.

New Orleans has one of the best backup quarterbacks in the NFL in Teddy Bridgewater. People seem to forget that he was a first-round pick and the starting quarterback of the Minnesota Vikings until a gruesome knee injury ended his tenure there.

Bridgewater put up decent numbers in the game against the Rams, a major Super Bowl contender this season. Saints fans shouldn’t have expected greatness from Bridgewater in that initial showing, considering that he just wasn’t prepared to be thrust into the starring role mid-game.

Now that Bridgewater has had an entire week of preparation, he’ll inevitably improve on his play from the week prior. He also has several elite offensive weapons like Alvin Kamara and Michael Thomas at his disposal.

Saints fans need to remember that Drew Brees will return in six weeks. In that time, Bridgewater will be able to maintain the stability of the squad during Brees’ absence. Losing Brees will not affect the Saints’ Super Bowl chances as much as league analysts say it will.

As the NFL turns

The NFL is slowly turning into the NBA. For a while it seemed like player empowerment happened mostly in the NBA, while NFL players got locked into long-term agreements. But recently things have started to change.

Since the start of last NFL season we’ve seen holdouts from Le’Veon Bell, Melvin Gordon and Ezekiel Elliot to get better contracts, while Antonio Brown and Jalen Ramsey have orchestrated their way out of a situation they are not happy with. The NFL is finally starting to realize the importance of player empowerment, and it’s going to change the league from randomness almost every year to potential super teams.

On the one hand, it has become fun to see the NFL turn into a soap opera, where you wake up every day and don’t know what you’ll get. Just this week we saw Jamal Adams remove the “Jets” from his social media bios, an odd incident involving Antonio Brown at a doctor’s office and a bizarre Jalen Ramsey press conference regarding his trade request.

At the same time, it’s taking away from the typical sense that any team in any year has a shot to win. The Miami Dolphins, for example, could not win this year even if they wanted to. 2018 first-round pick Minkah Fitzpatrick — along with several other Dolphins — requested a trade shortly after the team’s first loss. This new NFL soap opera is great drama, but will ruin competitive balance down the line.