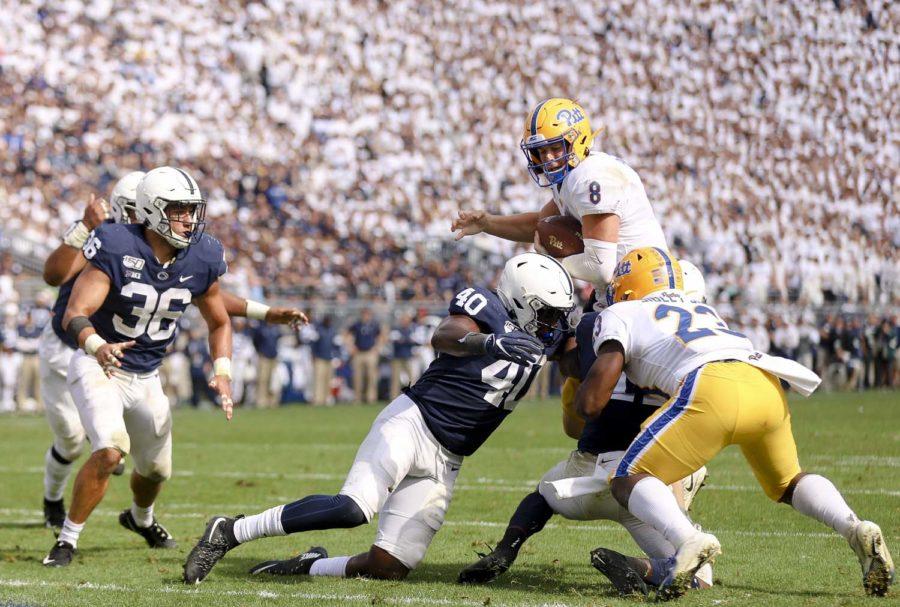 Junior quarterback Kenny Pickett (8) is tackled for a loss right outside of the Penn State goal line.

It’s now been six days since Pitt football lost in heartbreaking fashion to Penn State. In most cases, it would be overkill to continue talking about a game that happened so long ago. But since this might’ve been the last Pitt-Penn State matchup to happen in our lifetime, we have no choice but to just keep revisiting it for all eternity, starting with this week’s film study.

By this time, everyone already knows what happened in the game — the Panthers came in as 17-point underdogs and outperformed everyone’s expectations, coming within a yard of tying the game late in the fourth quarter before screwing it up in classic Pitt fashion.

So, let’s take another close look at what broke down for the Panthers on the goal line.

Pitt had the right idea coming out of the huddle, lining up in a compact I formation with all 11 players in the box. Penn State also kept all of its defenders close to the line of scrimmage, selling out to stop what looked to be a running back dive to junior A.J. Davis. 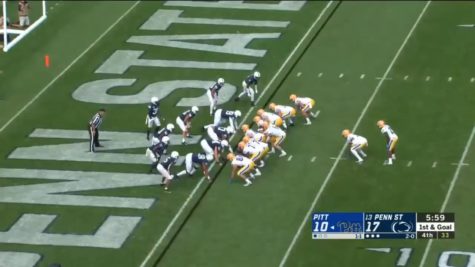 Then the ball is snapped, and it quickly becomes clear that Pitt isn’t running the ball but instead performing a play-action pass. Redshirt junior Rashad Wheeler leaks out to the left side of the line to pass block, which lets the defense know it’s a pass before Pickett even performs the fake. If it were a run play, Wheeler would lead block for Davis on the right side.

Pickett drops back in the pocket and cranes his head to the left, looking for redshirt sophomore tight end Grant Carrigan to leak out into the flat. The problem is that Carrigan gets jammed hard by Penn State’s defensive end. By the time he finally breaks into his route, he’s blanketed by junior cornerback Tariq Castro-Fields. There’s no play to be made there.

Pickett’s second option is redshirt senior Nakia Griffin-Stewart on the back side of the play. Griffin-Stewart gives a quick chip block to his defender before leaking over to the left side of the end zone. Again, there’s a problem — senior linebacker Cam Brown gets a free path to the quarterback once Griffin-Stewart begins his route.

This completely alters the outlook of the play, which was already bleak. As you can see in the video, Griffin-Stewart and Carrigan were both covered tightly, so Pickett likely wouldn’t have been able to complete a pass even if given a clean pocket. Forced to roll away from the play’s intended side, he can only throw the ball out the back of the end zone as a group of Nittany Lion defenders closes in on him.

When you have first and goal within the 1-yard line you should probably run the ball, but the premise here — running a play-action pass — wasn’t actually that bad. The Panthers found success on a play-action pass on fourth and one earlier that drive.

But the specifics of the play were iffy. If the Panthers were going to play-action pass, they should’ve done a better job faking the run. Wheeler should’ve sprinted to the play side to sell the lead block, with Davis hot on his tail. Then, Griffin-Stewart could’ve leaked out into the right flat while Carrigan followed from the back side. This would’ve given Pitt extended room to work with on the long side of the field, plus an easier throw for Pickett rolling to his strong-hand side.

At the very least, Pickett’s incomplete pass gave Pitt the chance to maintain its ideal field position without losing any yards.

But apparently, offensive coordinator Mark Whipple didn’t get the memo. The Panthers set up in a deep pistol formation, with Pickett roughly 5 yards behind the ball. What was second and inches suddenly became second and six, essentially dooming the play before it even started. 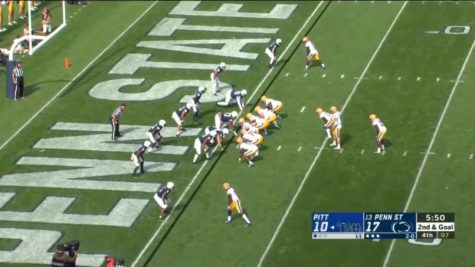 This was more or less my reaction the second I saw Pickett set up five yards behind the center:

Obviously, whatever play Pitt ran from this formation could’ve technically succeeded. But the fact that Whipple decided to back his offense up 5 yards from its naturally advantageous position gave the Panthers a far smaller chance at success.

Bad things tend to happen when you line up in shotgun at the goal line. Just ask the Seahawks, who lost Super Bowl XLIX because they similarly overthought what should’ve been an easy scoring scenario. Or the Pittsburgh Steelers, who lost a crucial game to the Denver Broncos last season by doing the same thing.

Granted, the Panthers didn’t pass on this play. But it might’ve been better if they did, because the play Whipple chose to run instead was so mind-numbingly ill-devised that it never stood much of a chance at all.

Whipple dials up a read option where Pickett can either give the ball to Davis up the middle or keep the ball and run off the edge. His job is to read Penn State’s defensive end, redshirt senior Shaka Toney — number 18 in the video. Pickett arguably makes the wrong read, as Toney comes upfield, meaning Davis should get the ball up the gut.

But Pickett keeps the ball, and redshirt sophomore running back Todd Sibley Jr. is forced to account for Toney with a chip block. That leaves Penn State redshirt senior safety Garrett Taylor with a clear shot at Pickett, and he steps up and makes a great tackle behind the line of scrimmage.

To its credit, Penn State played impeccable defense on the play. Pickett’s misread aside, the play could’ve worked. But here’s why it was such a terrible call in the first place.

First of all, the Panthers aren’t a read option team. They hardly run the play at all, so it was a bit baffling that Whipple would elect to run it in one of the game’s biggest moments. Pickett’s no small fry at 6-foot-2 and 225 pounds, but he’s also not the sort of bruising runner who typically plows over defenders in the open field. And if you’re going to run the ball, it’s not wise to set it up from the shotgun, where you can potentially lose yards as Pitt did.

The play is especially boneheaded when you consider the alternative — a quarterback sneak.

Running a quarterback sneak isn’t just effective in theory — it’s far and away the best play a team can run in short-yardage situations. ESPN.com published an article in 2017 that detailed the results of every short-yardage NFL play from 2001 to 2016. It revealed that quarterback sneaks result in an 83% conversion rate, compared to 66% for non-sneak rushes and 54% on pass plays. By passing on first down and running from the shotgun on second, Whipple completely neglected the simple play that gave Pitt its best chance to tie the game.

A quarterback sneak also brings a very low level of risk. You can’t lose yards — if the play gets stuffed, you’re right back where you started. The worst-case scenario is that the quarterback fumbles. It’s such an easy play that even Tom Brady, one of the most unathletic quarterbacks in the NFL, had a career 91.1% success rate on sneaks as of 2017. When you’re within a couple feet of the end zone, even Brady looks like Walter Payton. Just look at this guy go.

Pitt could’ve run a hard count, gotten a slight push from redshirt junior center Jimmy Morrissey and Pickett could’ve leaned ahead a few inches for the score. It really could have been that easy.

Narduzzi drew most of the ire from fans after the loss for his decision to settle for a field goal on fourth down, but this was the play that truly lost Pitt the game — and as an in-game call, the responsibility falls on the Whipple’s shoulders.

Narduzzi defended the play-calling after the game, dismissing all the “armchair quarterbacks” who could only criticize the play in hindsight. That is, of course, ridiculous, considering the play was a longshot from the start. In basketball, if you pass up a layup to shoot from halfcourt, it doesn’t matter if the shot goes in — it was still a stupid shot to begin with.

Here, Pitt essentially runs the play-action look it should’ve given on first down. Griffin-Stewart runs to the corner, Davis leaks into the flat, Carrigan trails from the back side of the play and Pickett rolls out to the wide side of the field. This was actually a good play — Davis especially appears wide open toward the front of the goal line.

There was just one crucial miscommunication — no one picked up Brown, the play-side edge rusher. He sprints untouched into the backfield and wraps up Pickett, who still nearly gets the ball to Davis for a touchdown.

It’s unclear who was in the wrong here. It’s possible that Griffin-Stewart was supposed to chip Brown before running his route. More likely, Sibley Jr. was supposed to handle protection off the edge. Instead, he gives a meaningless play-action motion and sets up to block no one. If Sibley Jr. picks up Brown on the edge, Pickett completes an easy touchdown pass to Davis.

Then came Narduzzi’s decision to settle for a field goal on fourth down, which is what generated most of the headlines after the loss. It’s hard to blame him for simply trying to settle for some points after three straight botched plays, but it is what it is. Redshirt junior kicker Alex Kessman missed the short attempt, and the rest is history. In reality, the game was lost two plays prior, when Whipple fell for football’s classic folly — backing up off the goal line without even attempting the sport’s most efficient short-yardage play.