Four nights of laughs at the Steel City Improv Festival 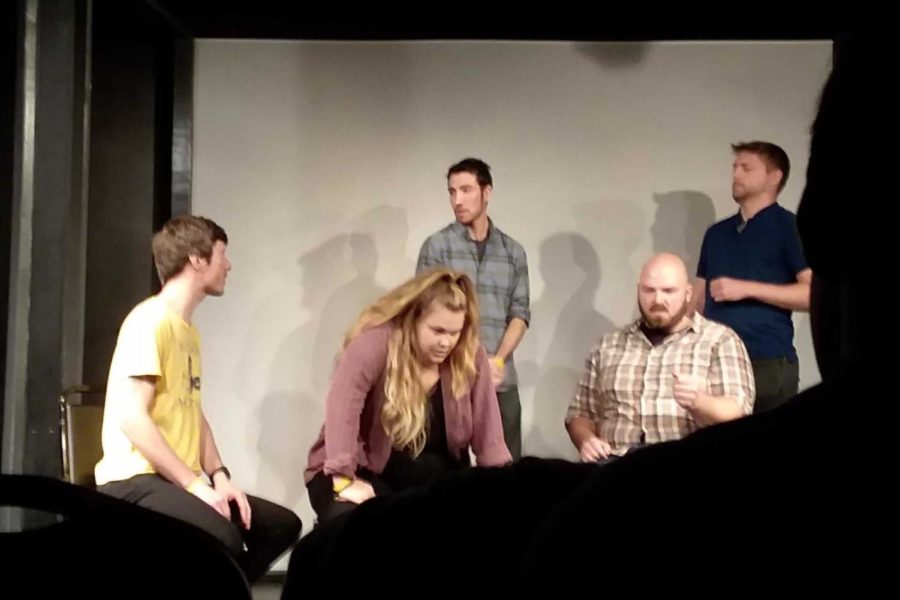 By Matthew Monroy, For the Pitt News

The Scorned Chefs began their show at the Steel City Improv Festival with one word — “saltines.”

Twenty-five minutes later, the three-person group sat huddled in the corner of the stage, cheering on an imaginary team with sporadic whoops and screams, like a primitive group of over-invested soccer moms.

The Scorned Chefs were just one of the 34 improv groups performing over the course of the first-ever Steel City Improv Festival on Thursday night. For Mike Kauffman, one of the festival organizers and an improv actor himself, the four-day event was a great opportunity for people to see improv from around the country.

“We have 15 unique cities represented in this festival — and Canada!” Kauffman said. “We have some headliners from New York, Chicago and LA.”

The festival kicked off its first day, as well as the Sunday performances, at the 90-seat Steel City Improv Theater on Ellsworth Avenue in Shadyside. Shows on Friday and Saturday were held at the much larger Bricolage Theater in Downtown. According to Kauffman, splitting up the locations was done to increase the festival’s audience capacity for teams traveling from outside of Pittsburgh.

“We have a lot of out-of-town teams coming,” Kauffman explained. “We wanted to have more space for performers in the festival to make sure that everyone got to see the improv that they wanted to see.”

Although this may be the first year of the festival, the idea existed in Steel City Improv Theater’s owner Kasey Daley’s head for quite some time. For Daley, organizing a festival was the perfect way to display the wealth of talent in Pittsburgh and around the country.

“I’ve been talking about this for years, and finally I was just like ‘let’s do it,’” Daley said. “We’ve been dragging our feet for nine years; let’s just do it, or we’re never gonna do it.”

The festival showcased a multitude of diverse acts, most performing long-form improv — a form of improvisation where the performers take a brief, one-word suggestion from the audience at the top of their set and craft a 25-minute-long story. This is in contrast to short-form, in which performers take multiple suggestions from the audience throughout the show and perform rapid vignettes.

Although almost every group that took the stage performed long-form improv, each scene was characterized by the groups’ individual style. Some, such as My Dog Carl or Some Kind of Felony, favored outlandish and absurd situations with tenuous connections between all the scenes. Teams like Bright Invention took a more straightforward and linear approach, using the audience’s suggestion of “a hat shop” to create one, whole, fleshed-out world. Bright Invention member Benjamin Lloyd, 57, from Elkins Park, Pennsylvania, spoke about the group’s goals as an improv group to create a complete experience onstage.

“What we try to do is create a little play,” Lloyd said. “We also want our comedy to be based in relationships and characters, and we want it to sustain over time.”

For Daley, bringing improv to the forefront of the Pittsburgh theater scene has been a goal for many years. In fact, the lack of a thriving improv scene in the city was what drove her and her husband Justin Zell to found the Steel City Improv Theater in 2010 in the first place.

“When we came here there were really no classes or any dedicated theaters, there were only two groups that were doing anything, and they were pretty much just doing short-form,” Daley said “And we were like, ‘Oh! Let’s start teaching classes!’”

Daley and Zell began by teaching intro-level classes in the Stephen Foster Memorial Center in Lawrenceville, but as support and interest grew, so did the need for a larger space.

“We found this really cheap space in the North Side. It was in the basement of a church, a really weird space,” Daley said. “It was a 45 seat theater, and it just gave us the chance to do this consistently.”

Their theater has since grown from its humble beginnings to a thriving improv space that routinely features skilled house teams, all while spreading the technique of improv through classes designed for all skill levels.

One of the improv teams who performed on Thursday night, the Fancy Boys, got its start as a Steel City Improv Theater house team — a position in which the theater highlights an improv group through multiple performances throughout the season. Even though the team hadn’t performed together in a long time, team member Ariana-Valente Johnson, 30, from Austin, Texas, described the group dynamic as being exactly the same as before.

“You remember how to play around with other people,” Johnson said. “You remember their strengths, and how to touch on them, even if it’s not explicitly in your brain.”

The teams’ devotion to the craft certainly resonated with the audience. Each set was received positively, often eliciting whoops and yells during high-energy moments. Even the occasional and unexpected mishap — such as an audience member’s phone ringing in the middle of their set — was transformed into an element of the show.

After the show, audience members and improvers mingled as the festival organizers served beer and pizza. Grouped in a corner with his friends, Raymond Giorgi of Lawrenceville said he enjoyed the show and was looking forward to the upcoming shows throughout the weekend.

“I’m excited for the rest of the festival, if tonight is any indication,” Giorgi said.

Festivities continued well after the show ended, and a massive improv group eventually formed on stage, comprised of audience members, performers from that night and anyone who wished to join — regardless of skill level. There was a palpable sense of community and excitement in the room — a theme that Daley highlighted.

“If you’re in a scene where everyone’s listening and everyone is taking care of each other and everyone’s making their scene partner look brilliant, I mean, it’s amazing.” Daley said.