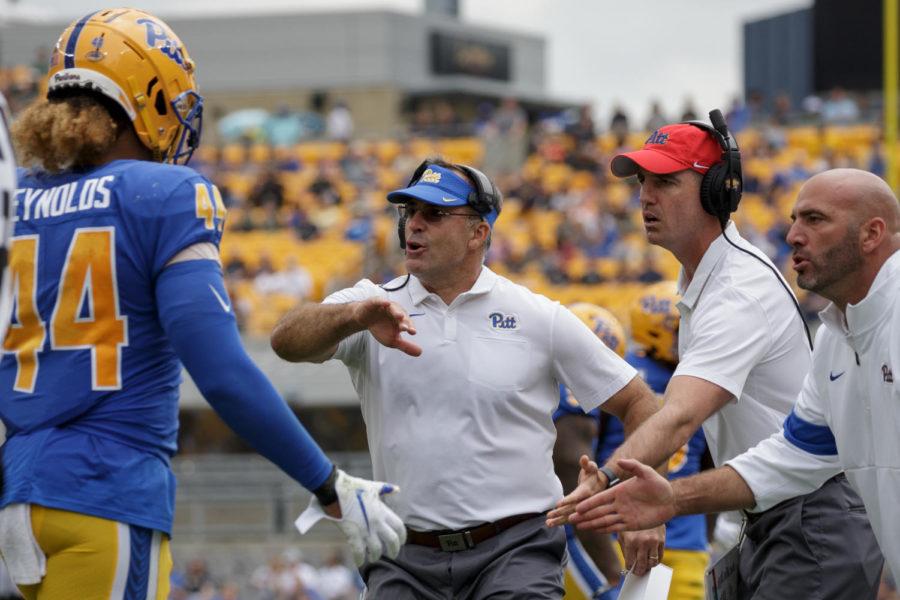 Coach Pat Narduzzi’s Panthers will play against the University of Delaware’s Fightin Blue Hens on Saturday.

“I’ve said this every week, but I continue to see improvement from week one to two, two to three and three to four,” Narduzzi said, addressing reporters Monday afternoon at his weekly press conference, ahead of Pitt’s matchup with the Delaware Blue Hens this Saturday at Heinz Field.

“I still think that’s why we coach, that there’s still room for improvement. I don’t think you’re seeing a finished product yet, and I think that’s a good thing,” he said. “We need to keep our foot on the gas pedal this week because I think it’s awfully important with who we got coming in here.”

The importance of Pitt’s matchup with the Blue Hens, ranked No. 19 in the FCS Coaches Poll, comes from a curiously intertwined history with Narduzzi and Delaware’s football program. His personal connections date back to his early days as a coach, as a player and even as a ball boy for the teams his father, Bill Narduzzi, coached at Youngstown State.

“Back in 1979 … the only team we lost to at [YSU] was Delaware,” Narduzzi said. “I talk to kids all the time, this game’s gotta be personal. It’s personal for me. I’ll never forget 1979. Never forget getting beat in Austintown Fitch Stadium or getting beat in the [Division II] National Championship game down in Albuquerque, New Mexico. Youngstown expected to win the championship. We didn’t get it done because of Delaware.”

Narduzzi later expanded on the importance of the personal connection to the game, and how he tried to stress that to the team each week.

“I’ve got a little-kid connection. So it’s personal for me,” he said. “Each one of us has some way, you gotta find out what gets you going and who you’re playing for. To me, it has to be personal.”

“I mentioned we had 27 players, I believe, play on defense the other day. And you’re playing a pretty darned good football team, as we all know. And the most impressive thing — we played guys, they stepped up, made plays,” he said.

Narduzzi acknowledged the sweetness of the upset win over the now 22nd-ranked UCF Knights, while still addressing what exactly his team needed to clean up in practice this week following an imperfect victory that included a blown 21-point lead, an 87-yard punt return touchdown for UCF and two key missed field goals from junior Alex Kessman.

“Nobody else in the country was giving us a shot to win that football game,” Narduzzi said. “That’s the sweetest thing about it.”

The biggest things to improve upon this week, according to Narduzzi, include ball security, place-kicking and overall consistency through all three phases of the game.

“We’ve got to work on ball security again this week. Ball security can get you beat really quick,” he said. “’m going to go on record saying we probably won’t miss another field goal the rest of the year … We’ll get that fixed.”

What steps Pitt takes towards developing a more consistent output each week will be revealed when the Panthers and Delaware kickoff Saturday at 12:30 p.m. at Heinz Field.