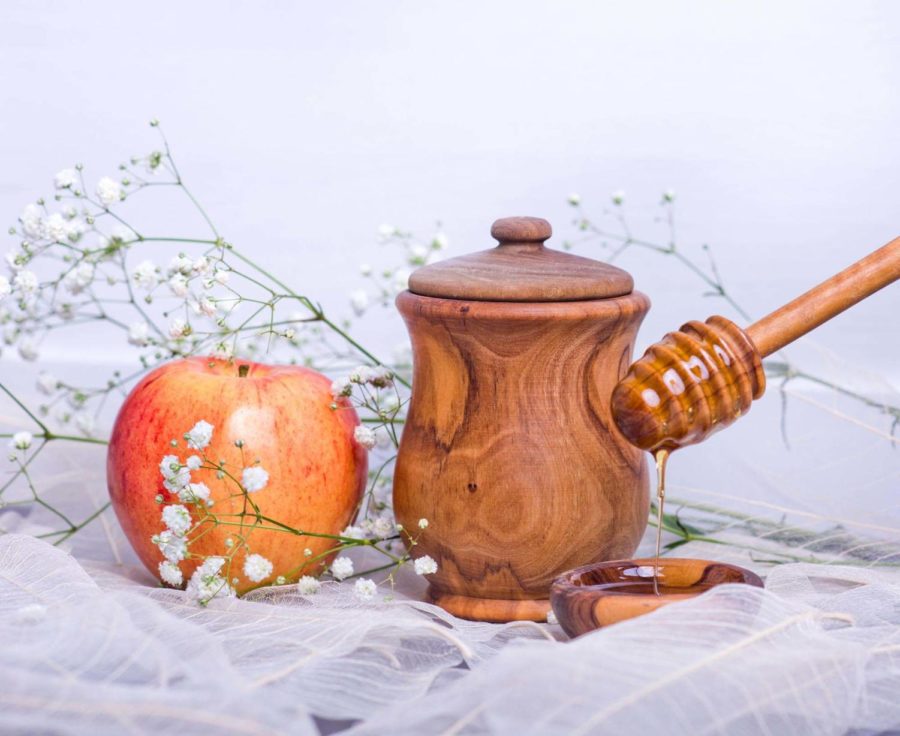 The Rosh Hashanah meal begins with the dipping of apple into honey and a special blessing for "a good and sweet new year."

Abbey Farina was “naive” when she came to Pitt as a first-year, she said.

Her fall pre-calculus class had a quiz every Thursday during recitation, but she assumed that Rosh Hashanah — one of the most important days of the Jewish calendar — would be an exception. So when she missed the recitation that week, she said it didn’t occur to her to worry.

An email from her TA that arrived soon after, letting her know that she had missed the quiz and received a zero, came as a surprise.

“I emailed [the professor] and said, ‘Oh, I’m sorry, I didn’t check beforehand, but I assumed there wouldn’t be a quiz since it’s a Jewish holiday, so I didn’t go to recitation,’” Farina, a junior psychology major, said. “She was like, ‘You didn’t go, so you get a zero.’”

There are a number of Jewish students with stories like Farina’s. The 10 Days of Awe — among the holiest days of the Jewish calendar, which include both Rosh Hashanah, the Jewish New Year, and Yom Kippur, the Day of Atonement — often align with the first major tests and assignments of the fall semester.

And although Pitt’s guidelines for religious observances advise faculty to work with students to reach “mutually agreeable arrangements,” some students find they encounter pushback from professors around the High Holy Days year after year. Many students are able to resolve these issues only after seeking backup from Hillel Jewish University Center, and some students aren’t able to resolve them to their satisfaction at all.

Goldie Segol, a senior linguistics major, will miss the first exam of the semester in one class this year because it was scheduled for next Monday, Rosh Hashanah. Her professor told her she’ll have to take an essay-based makeup exam instead of the multiple-choice exam others will take in class.

Even after emailing the professor a copy of a letter from Hillel Director Daniel Marcus explaining the importance of Rosh Hashanah, Segol said the professor and the dean of the school agreed it was fair to let her take the essay exam, which she called “inherently harder” because she thinks it would require more preparation time.

“That’s punishing me for observing my holidays,” Segol said. “Rosh Hashanah is one of the most important Jewish holidays. It’s equivalent to asking someone to come in on Easter or Christmas.”

When Gabby Swartz, a sophomore electrical engineering major, couldn’t attend a class-required weekend event because she was out of town for Rosh Hashanah, she said her professor gave her a zero for missing the event. Then, Swartz said the professor told her she would have to choose between engineering and “being religious.” Though she was eventually able to solve the issue with her grades by going to the school’s office, she said she doesn’t think anything has changed since her experience — either with the professor, or at Pitt.

In addition, this year’s Parent and Family Weekend is scheduled around Saturday’s home football game, the day before Rosh Hashanah. The timeline poses a difficulty for some Jewish families who would need to return home and prepare for the holiday by sundown on Sunday.

University spokesperson Kevin Zwick said in an email that Parent and Family Weekend is scheduled so as not to conflict with other campus events like homecoming. All events are scheduled for Friday and Saturday in recognition of Rosh Hashanah, he said.

Pitt’s policy on religious observances states that faculty meetings shouldn’t be scheduled on dates of religious observance and that students shouldn’t be penalized for missing class. If the date of an observance conflicts with a scheduled academic activity, the guidelines say students and faculty should “make a reasonable effort to reach mutually agreeable arrangements to reschedule the academic activity or provide a substitute activity or evaluation.”

Faculty members are notified of these guidelines, Zwick said in an email. Provost Ann Cudd sent the guidelines out in a memo in August, advising faculty to encourage their students to bring potential conflicts up as early in the semester as possible.

Despite that, Ellie Holzman said, the problem comes back every year.

“Even though we get excused absences for the holidays, it is definitely not easy with every professor to make sure we can make up grades and get assignments,” Holzman said.

When Holzman, a senior social work major, missed a weekly quiz in a sophomore sociology course for Rosh Hashanah, her professor initially wouldn’t allow her to retake the quiz. Class policy allowed each student to drop their lowest quiz grade — this would have to be hers, the professor said.

Finding the decision “really unfair,” Holzman reached out to Hillel. The group provided her with a letter from Marcus addressed to faculty, emphasizing the importance of allowing students to celebrate Rosh Hashanah.

Holzman sent Marcus’ letter to her professor. At that point, Holzman said, the professor finally folded, allowing her to retake the quiz.

“The whole process was really uncomfortable for me because I felt like I was annoying the professor about something that should have been a non-issue,” Holzman said.

Farina said in an ideal world, there wouldn’t be any classes on Rosh Hashanah or Yom Kippur. That’s unrealistic, she said, but she thinks professors should at least not be able to schedule graded assignments for the High Holy Days.

“Just don’t schedule an exam on a Jewish holiday,” Farina said. “If it were a Christian holiday, it wouldn’t be like this. It would be an outrage.”