A nightmare pops up on Forbes Street 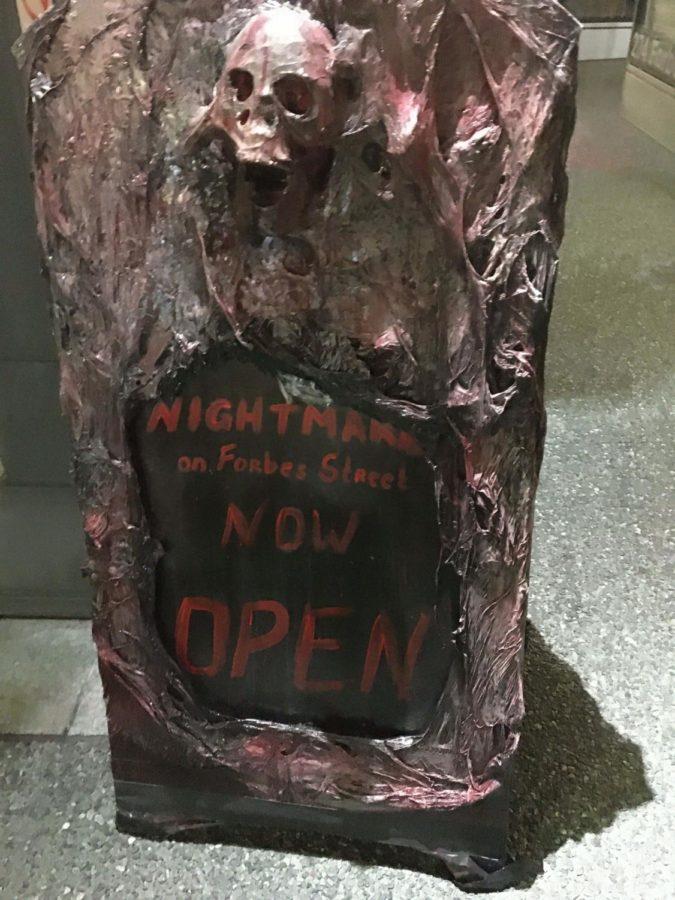 A low, slow fog creeps out the door of 268 Forbes Avenue downtown, where chains hang in the window and high-pitched screaming resonates from behind the massive, blacked out doors.

Most people’s first instinct would be to run far, far away from a place like this. But inside, groups laugh and stroll — horror is part of the fun at Nightmare on Forbes Street pop-up bar.

Just in time for the coming Halloween spirit, Nightmare on Forbes Street follows six other themed pop-up bars in the same space, including the Game of Thrones themed Bar of Thrones, owned by restaurateur Bob Wolfinger. Wolfinger, who also owns Market Square restaurants NOLA on the Square, Ill Pizzaiolo, Metropolitan Club and Molinaro, got the idea to make this space a pop-up location from the popularity of other pop-up bars.

“Because of the success of some pop-up bars in Pittsburgh and nationally, the space was empty, and the more I thought about it I said ‘let’s give pop-up bars a chance at this space that we have set up already to accommodate people for a restaurant,’” Wolfinger said.

The bar offers horror-themed cocktails and snacks, as well as selections of beer and wine. The food, made by neighboring restaurant Wolfie’s Pub, ranges from typical bar fare, such as cheese fries, to more elaborate offerings like fried mushrooms with chipotle aioli.

Nightmare on Forbes Street serves standard mixed drinks, along with a menu of six specialty cocktails. Bar Manager Shane Wilps, 34, of Mount Washington, points to the most popular drink on the list in front of him — The Babadook, a vodka cocktail mixed with apple, caramel and ginger beer.

“Definitely the most popular is this one, number three,” Wilps said.

No small detail has been overlooked in creating the bar. Terrifying, realistic-looking skeletons hang from the ceiling, and the lanterns lighting the space are draped with black gauze, dimming the lights.

The patron with a strong bladder would miss one of the most stand-out details of the bar. The hallway to the bathroom is lit entirely with black lights, reflecting neon paint splatter on the walls. Any white clothing glows magnificently in the room, making certain customers part of the decor. All of the elaborate decor follows completely gutting the space after the last concept, Tiki 268, closed in late August.

According to Wilps, after six different pop-up concepts, his team of creators had the execution of this concept down pat. The entire bar space is customizable, so with each concept, everything must be redesigned. From the drinks, to the decor, to the food, the bar completely changes every couple of months. Though this can be challenging, Wilps says the ability to have complete creative control over a space is also incredibly rewarding.

“A lot of times restaurants change their menu or their stuff like seasonally,” Wilps said. “We do it a little bit more than that. About every eight weeks or so it’s brand new menu from top to bottom — drinks, beer, food, wine, the whole workup is brand new.”

Bartender John Rodriguez, 32 of Southside, said that although this is the first time he’s worked with this pop-up space, he was initially drawn to the idea by visiting Bar of Thrones in April. He experienced the efficiency of the pop-up team firsthand.

“This is actually my first time working with these guys,” Rodriguez said. “It’s one of the best organized pop-ups I’ve ever worked.”

When it comes to drinks, Rodriguez is quick to name his personal favorite, The Krueger, made with Tanqueray gin, lemon, agave and sparkling cider.

“I’m a big fan of the Krueger,” Rodriguez said, “but I’m a Freddy Krueger fan, so I’m a bit biased.”

Much like past pop-ups, portions of the proceeds from Nightmare on Forbes Street will benefit a local charity. In the past, charitable donations from the bar have exceeded $5,000 and have benefited charities such as the Alzheimer’s Foundation and I Carry My Sister’s Heart, which provides support for families dealing with cancer. Sales from two of the drinks from Nightmare on Forbes Street will benefit Big Brothers Big Sisters of Pittsburgh. Wilps is eager to give back to the organization, as a previous partnership didn’t work out.

Rodriguez expects business to pick up as the holiday approaches, especially after witnessing large crowds during the bar’s opening night, which was — appropriately enough — Friday the 13th.

“Thursday through Saturday it’s really packed. I was here opening night and the night after, it was crazy.”

In addition to serving up drinks and bar fare, Nightmare on Forbes Street will also play host to a variety of different events to help people get into the Halloween spirit, like trivia nights and giveaways.

“We’re going to be having trivia — horror movie trivia — starting on Oct. 9th, and then every Wednesday,” Wilps said. “Just little stuff like that, it’ll be kind of cool.”

Nightmare on Forbes Street will remain open in Market Square until Nov. 2.