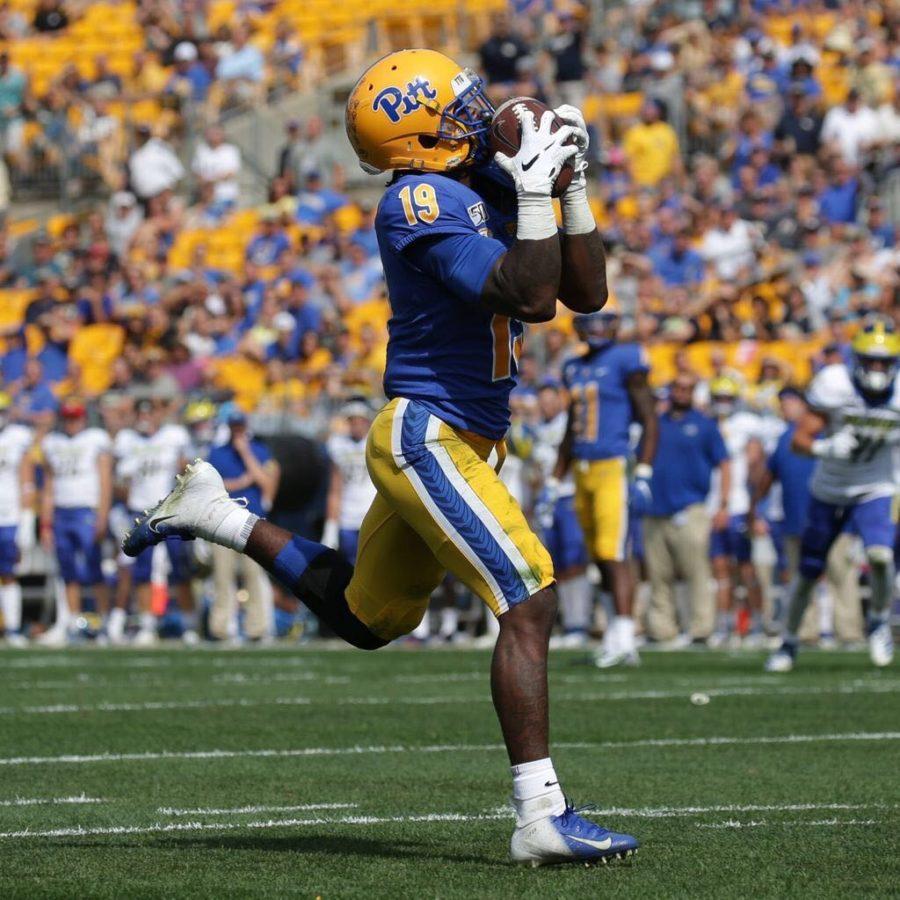 V'Lique Carter catches a touchdown pass to put Pitt up 7-0.

Pitt football was supposed to blow out its FCS Delaware opponent at Heinz Field on Saturday, entering the game as 28-point favorites. But that lopsided outlook quickly changed as kickoff approached and it became clear from the Panthers’ pregame warmups that several crucial players weren’t playing.

Though the Panthers’ defense came through with another dominating performance, penalties and turnovers nearly led to a shocking Pitt loss. In the end, the Panthers narrowly escaped with a 17-14 victory.

“Well, obviously it was not the Pitt football team that I like to see,” head coach Pat Narduzzi said afterward. “I don’t think we came up with the emotion that we could have… After an emotional win like we had a week ago, sometimes it’s hard to get them going, and I didn’t feel it from the beginning.”

Junior quarterback Kenny Pickett, junior running back AJ Davis, first-year running back Vincent Davis, junior defensive back Jason Pinnock and redshirt junior linebackers Chase Pine and Elias Reynolds — all of whom see regular playing time — were scratched just ahead of Saturday’s game. There was no prior indication this week that any would miss time, though Pinnock and Pickett both suffered injuries during last week’s UCF win.

Narduzzi said that the choice to sit his starting quarterback was a true gametime decision, and that Pickett had taken limited snaps throughout the week while dealing with the shoulder injury he suffered against UCF. The rest of Pitt’s missing starters were also “banged up” in some capacity.

“I just don’t think Kenny was 100 percent. And we thought all week that he was going to be able to go… it was really a gametime decision,” he said.

But Pitt kept its opponent in the game with repeated self-inflicted wounds, namely turnovers and penalties. The Panthers turned the ball over twice in their own territory, compared to zero turnovers for Delaware. Pitt also committed 13 penalties for 115 yards — the Blue Hens committed only three for 26 yards.

Patti, who threw a touchdown pass in relief the previous week, looked more than serviceable to start the game. His first pass was a 46-yard bomb to redshirt junior wideout Taysir Mack, though that drive would end with a fourth-down incompletion at Delaware’s 29-yard line.

After an anemic first quarter for both offenses, the Panthers — as has been a habit for them all season — struck quickly in the second quarter. Patti found sophomore utility man V’Lique Carter up the seam for a 30-yard touchdown pass that put Pitt up 7-0 with 14:54 left in the second quarter.

Patti’s inexperience finally started to show with an ill-advised pass directly to a Delaware defender with Pitt at its own 35-yard line. The interception gave the Blue Hens a short field to score and they capitalized, as redshirt sophomore quarterback Noah Henderson delivered a back-shoulder throw to junior receiver Gene Coleman II in the left corner of the end zone to tie the game.

“I made mistakes early,” Patti said. “But, first college game and you’re going to get that.”

Pitt responded with its most complete drive of the day, a 17-play, 73-yard trek that started at its own 25 and finished at the Delaware 2-yard line. Narduzzi elected to kick a field goal on fourth-and-goal, and redshirt junior kicker Alex Kessman netted the short attempt to put the Panthers up 10-7 at halftime.

In their first possession after halftime, the Panthers committed another costly turnover. While looking to advance upfield after catching a screen pass, senior receiver Maurice Ffrench was blindsided by sophomore linebacker Drew Nickles, who ripped the ball out of his hands.

Delaware’s offense took over on downs with just 21 yards to score. Five plays later, Henderson completed a five-yard touchdown pass to first-year receiver Jourdan Townsend, who was all alone in the right corner of the end zone following a miscommunication in Pitt’s defensive backfield. The score put the Blue Hens up 14-10 in front of a stunned Heinz Field crowd.

The Panthers drove 36 yards on 10 plays on the ensuing drive, setting up a fourth-and-seven at Delaware’s 39-yard line. Narduzzi elected to try for a 57-yard field goal — a curious decision given his earlier choice to go for it on fourth-and-five from Delaware’s 29. Kessman’s attempt had the distance but fell wide right.

Penalties continued to be Pitt’s Achilles heel, keeping Delaware in the game despite the Panthers dominating in most other aspects.

An especially boneheaded penalty came late in the third quarter with Delaware facing a third-and-one. After rolling out, Henderson gave himself up going out of bounds well short of the first-down marker. But Pitt redshirt sophomore linebacker Cam Bright failed to stop his momentum and decked Henderson outside the boundary line, warranting a 15-yard personal foul penalty that gave Delaware a fresh set of downs.

Luckily for Pitt, the Blue Hens failed to take advantage of Bright’s mistake and punted six plays later. Pitt took over at its own 10-yard line trailing 14-10 with 14:10 left on the clock.

Needing a touchdown to avoid an embarrassing upset, Pitt kickstarted the drive with chunk plays out of the backfield. Redshirt sophomore running back Todd Sibley Jr. picked up 14 yards on first down, followed by a 20-yard rush from Carter.

After a holding penalty killed Pitt’s momentum and moved the offense back 10 yards, it was Patti who stepped up to make a clutch play. He connected with the sure-handed Mack for a 48-yard completion on third-and-17, moving the Panthers down to Delaware’s 15. Three plays later, the duo hooked up again on a 12-yard slant route — this time on a touchdown that gave Pitt the lead for good.

The game would end, fittingly, with a penalty — though this time it was Delaware who made an untimely miscue. Still leading 17-14 with 1:30 left in the game, Pitt was forced to punt at fourth-and-two from the opposing 40-yard line. But Delaware first-year linebacker Matt Palmer dove into redshirt sophomore punter Kirk Christodoulou on his follow-through, earning a roughing the punter call that gave Pitt an automatic first down. From there, the Panthers simply knelt out the clock to secure the nerve-wracking win.

Sibley Jr. finished with his best collegiate game to date, taking advantage of the absences of the two backs ahead of him on the depth chart. He finished with 22 carries for 106 yards. In the receiving game, Ffrench had nine catches for 57 yards while Mack led the way with five catches for 124 yards and a touchdown.

“I think we kind of built that relationship in spring ball,” Patti said regarding Mack. “Just getting reps with him, throwing with him, got a relationship, so it was just getting that back this season.”

Despite the victory, Pitt (3-2 overall, 0-1 ACC) will need to play sharper when it travels to Duke next Saturday. The Blue Devils (3-1 overall, 1-0 ACC) will be coming off a 45-10 statement win over Virginia Tech.