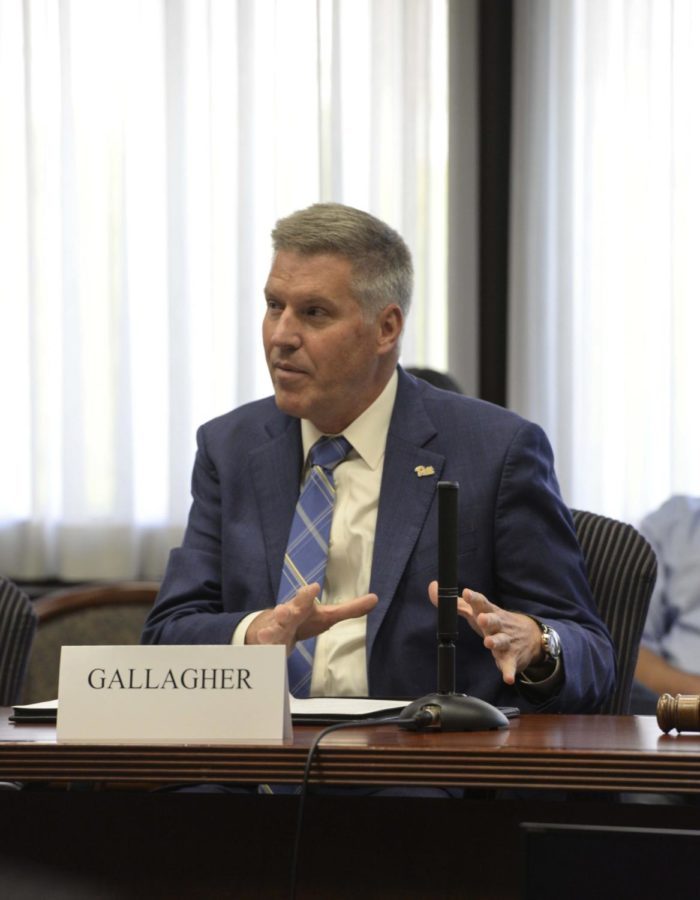 The Board of Trustees approved several changes to Pitt’s bylaws on Friday at Pitt Johnstown.

JOHNSTOWN, Pa. — As Chancellor Patrick Gallagher prepared to take the podium Friday at Pitt’s Board of Trustees meeting at Pitt’s Johnstown campus, shouts rang out from the back of the meeting room.

About 10 members of the Fossil Free Pitt Coalition, a group of student organizations that has pushed for the University to divest its endowment from fossil fuel investments, raised a large, orange banner reading “Injustice is a Risky Investment.” Each proceeded to read from a prepared statement.

FFPC demanded the board hold a vote at its next meeting on Feb. 28, 2020, to divest from fossil fuel investments and set a deadline of April 2020 for divestment to be complete — specifying that unclear “appropriate action” would be taken if its demands aren’t met. Chief Financial Officer Hari Sastry later said his goal is to have socially responsible investing criteria, as well as investment exclusion guidelines, in front of a board committee by the end of the year.

Board Chairperson Eva Tansky Blum shouted back that the students were out of order and said there are processes for students to bring their concerns to the board — despite there being no public comment period at board meetings. The students were promptly escorted out of the meeting room by Pitt police officers.

Once the action ended, Gallagher provided a report on University initiatives for the 2018-19 academic year.

Gallagher addressed growing concerns around the University’s streams, noting that Pitt had to significantly raise tuition amid historically smaller appropriations from the commonwealth government. He cited that in 1995, the commonwealth covered 56% of in-state tuition, but now only pays for 34% — which has led the University to launch a slate of new financial aid programs in the past year, including the Pitt Success Pell Match, where Pitt will match federal Pell grants.

“We have really not had the historical pattern of providing high levels of financial aid by the institution to support those affected,” Gallagher said. “Simply put, we are caught in a transition of being a highly supported state school, which can offer low tuition for everyone, and a more weakly subsidized one where the institution has to provide more financial aid.”

Related to financial aid, Gallagher also provided a short update on University admissions. He noted that nearly all of the growth in Pitt’s student body is coming from out of state. The number of students from California more than doubled compared to last year, and the populations of Texans and New Yorkers increased by almost 19% and 15%, respectively.

But in addition to serving the Pittsburgh region and the nation, Gallagher said Pitt must also keep its doors open to the world and remain globally engaged.

Amid a crackdown from the federal government on international scholars, Pitt recently suspended its Confucius Institute program after experiencing difficulty obtaining visas for 15 Chinese scholars slated to arrive this fall. Gallagher also said there has been a drop in the number of international students across the nation’s universities.

“Simply because there’s rising tensions doesn’t make the world smaller,” Gallagher said. “Members of the University community — including many who were not born in this country but work alongside us — must and will be supported in the vital globally engaged work that they do everyday.”

Gallagher affirmed Pitt will rise to the challenge of keeping its doors open to the world amidst the fraught political environment.