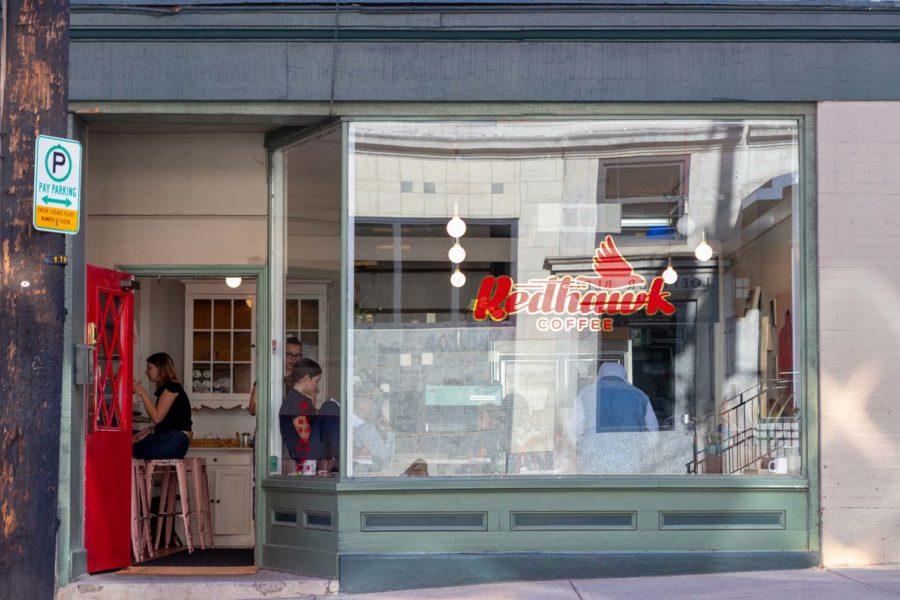 By Charlie Taylor, For the Pitt News

Nestled on Meyran Avenue in Oakland, Redhawk Coffee is an unassuming, intimate coffee shop frequented by Pitt students. At any given time, the shop’s small wooden tables are crowded with customers with laptops open and drinks in their hands, studying or making casual conversation.

But this little shop has big plans in the works. Owner and roaster Braden Walter plans to open a new roastery in Sharpsburg by Nov. 1, tentatively. This would grow Redhawk to the scale of other Pittsburgh businesses like Commonplace Coffee, which roast coffee beans to be sold by the bag and in other stores.

Walter, a 33-year-old North Hills resident, said he hopes the new roastery will help expand the wholesale end of his business. Redhawk primarily sells coffee drinks to customers at their physical locations, but Walter has been venturing into wholesale by supplying local bakeries and other coffee shops with the company’s signature coffee roasts for commercial use.

Walter started Redhawk in 2016 when he bought a coffee truck and began selling drinks, opening a brick-and-mortar shop later that year. He says that from the beginning, his goal for Redhawk has been to open a wholesale roastery.

“It’s easier to open a roastery once you have coffee shops to feed your beans to, rather than just open up and plan to pick up wholesale clients,” he said. “[The shop] is just a great way to get consistent business and get feedback from your customers.”

Currently, the shop has locations in Oakland and Downtown, where customers can buy 12-ounce bags of the cafe’s roasts. The company also does some small-scale wholesale, sourcing to bakeries and other coffee shops.

“Right now I’m roasting on somebody else’s equipment while our roastery is being built up and our roaster is being built,” Walter said. “So there’s only so much capacity I can take on right now. But as soon as we open up in Sharpsburg then we’re gonna kind of go full throttle on the wholesale side of things.”

350° Bakery in South Side is one of the few businesses currently buying Redhawk’s limited wholesale roasts. Co-owner Janie Crawford, 37, of South Side knows what it’s like to be a small business owner in Pittsburgh navigating wholesale and the management of a physical store. She and Barb Reale started 350° Bakery six years ago as a wholesale business and opened a shop this year.

“We thought, ‘Oh, it will be just like six months and we’ll have the store open,’” said Crawford. “That was two and a half years ago, so it took us much longer than we expected. It’s definitely a learning process.”

Neither Crawford nor Mitchell went to culinary school or business school, so growing their business to include a physical store had added challenges. Crawford said the past six years since they opened the business have provided plenty of learning opportunities, especially as she and Mitchell built up to their new kitchen and storefront.

“We had always baked for fun, but doing it as a business was totally different. Once we moved into this space, and we had to start hiring people, it was really like the business side of everything kicked in, and we realized like, ‘Oh, we have to learn all this stuff now.’”

350° Bakery and Redhawk have had a working relationship since before 350° Bakery’s brick-and-mortar store. The bakery sells their pastries — such as cookies, scones, muffins and triple-layer cakes — to several coffee shops and restaurants around the Pittsburgh area, including Redhawk. When it came time to start selling coffee at the bakery, Crawford says it was easy to choose Redhawk’s.

“We definitely wanted to sell locally-roasted coffee, and we worked with Redhawk already,” said Crawford. “They sell our pastries in both their shops, so it just made sense [to serve their coffee], because they roast their own.”

Crawford thinks that, so far, the partnership has proven successful, and her patrons have responded well to Redhawk’s roasts.

“Customers are responding really well to [the coffee]. They appreciate that we have local coffee, and they like it a lot.”

Though Walter plans to have the roastery up and running by Nov. 1, it may be quite a while until we see Redhawk coffee at many other businesses across the City.

“We’re still in the early stages of transitioning into [wholesale] as well, but I’ve been roasting for the last few years and just trying to kind of hone my skills with sourcing and roasting,” said Walter. “It’s kind of always been an objective of starting Redhawk, was to eventually be a wholesale roaster, but it’s just been a lot of stepping-stones to kind of get to this point.”

For the time being, Pitt seniors Katie Mcmahon, a psychology major, and Julianna Boyd, an environmental studies major, are more than happy going to Redhawk’s Oakland location for their fix of the company’s coffee.

Mcmahon and Boyd said they like the shop’s blends, and the idea of being able to get them at other spots around the City, but they don’t think they’ll be changing their drinking habits anytime soon — part of Redhawk’s appeal for them is its locality.

“We used to travel to coffee shops a lot our freshman year, and we had to take bus rides pretty far,” said Boyd. “So now it’s nice having a coffee shop that’s like, right on campus.”

They said they also like the cozy feel of the shop itself, something that another coffee shop selling Redhawk’s blends isn’t likely to replace. Ultimately, the store’s coffee may be available at more locations, but coffee itself represents only a sample of what Redhawk has to offer. This is why Boyd and Mcmahon go to the shop frequently, but have never bought a 12-ounce bag of beans to brew at home.

“If I just want a break in my day it’s a nice environment,” said Mcmahon. “And it has good coffee.”