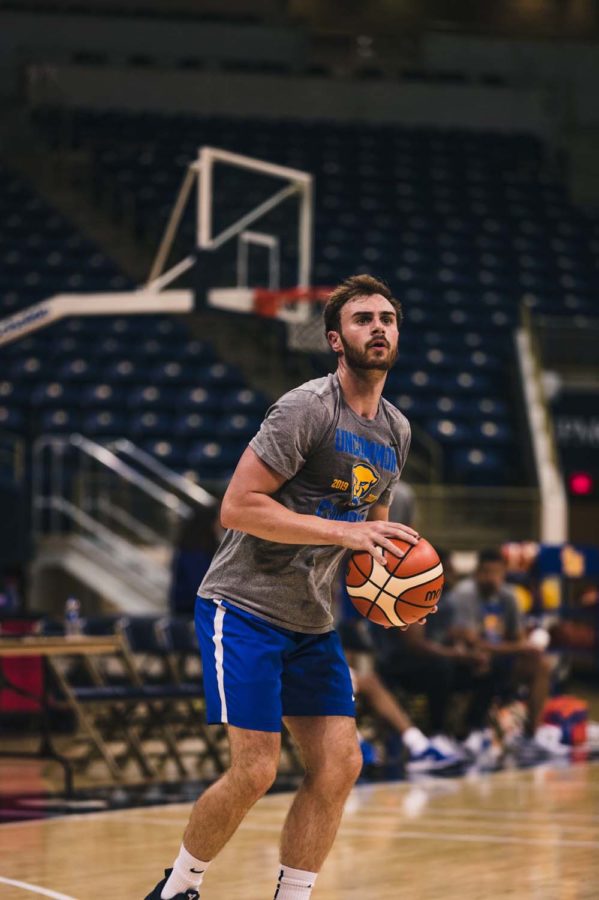 Okay, those last six nicknames are made up. But they seem like acceptable titles given the excitement around the Panthers’ new deep threat, a transfer from New Mexico Junior College who chose Pitt last spring over competing interest from Gonzaga, Iowa and Texas Tech.

Just whatever you do, don’t call Murphy by his first name.

“He prefers to be called Murph,” Matt Plizga, the team’s director of media relations, said while introducing Murphy. “He did not like it when I called him Ryan.”

According to Murphy, the dismissal of his family-given forename dates back to his youth.

“My family all calls me Murph. It started with my dad, who goes by ‘Big Murph,’” Murphy said. “My younger brother goes by ‘Little Murph’ … some of my friends call [my mom] ‘Momma Murph.’”

But in the end, it doesn’t matter what you call Murphy — he’s going to get buckets regardless.

When Murphy transferred to Pitt, he was a relatively unknown player to the casual college basketball fan. But coming out of southern California’s Calabasas High School in 2016, Murphy was a blue-chip recruit. ESPN.com ranked the 6-foot-2 guard as the sixth-best prospect in the state, just five spots below current NBA point guard Lonzo Ball and three spots above current NBA guard De’Anthony Melton.

Murphy committed to the Charlotte 49ers of the NCAA’s Conference USA and redshirted his first year. During his first full season in 2017-2018, he averaged 19.9 minutes and 6.7 points a game as a reserve. Even in a limited role, his shooting ability shone through — he made an efficient 40% of his 3-pointers, and in one game against Old Dominion scored 27 points while going 6-6 from deep. His time at Charlotte came to an end with a foot injury shortly after.

After getting a fresh start at New Mexico Junior College, Murphy took on a more sizeable offensive role. He averaged 18.5 points, 3.5 rebounds and 1.9 assists through 13 games, including a 46-point explosion against Macomb Community College. But again, his season was cut short by injury.

“Last year, for me, was big. Junior college, getting to prove that I was not just a catch-and-shoot guy at Charlotte. I went through a couple coaching changes where what I feel like I can do wasn’t displayed enough, and then I got injured,” Murphy said. “I got to do my rehab and I got a lot better during that period.”

Murphy’s path from junior college to Pitt resembles that of former Panther Jared Wilson-Frame, a senior last year. Like Murphy, Wilson-Frame used the JUCO scene as a platform to showcase his abilities. He averaged a team-high 14.8 points at Northwest Florida State College before transferring to Pitt for his junior season. As a senior, he became Pitt’s go-to deep threat and a critical part of the program’s rebuild — his 98 3-pointers trailed only Virginia’s Kyle Guy in the ACC last season.

With Wilson-Frame gone, the Panthers lose 43.6% of their total 3-point production from last season. Head coach Jeff Capel said Thursday that replacing Wilson-Frame will be a team effort, and that he hopes his returning players have gotten better at shooting the basketball. But that’s a lot to count on from a backcourt duo in McGowens and sophomore Xavier Johnson that often struggled to make outside shots against ACC competition. Pitt desperately needs someone who can stretch the floor, and that’s where Murphy comes in.

“It’s obvious X and Trey are amazing with the ball in their hands,” Murphy said. “If I’m making shots, that just frees them up even more because guys can’t help. And just even the threat of me being on the court, guys have to cheat a little more … which will make more room for Trey and X.”

Murphy will certainly benefit from playing with Johnson, who established himself as one of the ACC’s premier young playmakers in 2018-2019. Johnson earned himself a spot on the ACC All-Freshman Team alongside three one-and-done talents who joined the NBA in the offseason. He finished fourth in the conference with 4.5 assists per game, and his quickness and penchant for finding open teammates should bode well for Murphy’s catch-and-shoot looks.

“You gotta be able to catch and shoot in this league,” Johnson said. “Because that’s one of the main things we struggled with last year, was shooting the ball.”

With the official start of Pitt’s season still six weeks out, it remains to be seen what exactly Murphy’s role will be — starter, sixth man or seventh man. But on a team that needs a shooter it can rely on, Murphy should carve out a regular role for the Panthers if he continues to shoot around 40% from three.

When asked if there was any NBA player he models his game after, Murphy was quick to answer.

“The way I can shoot the ball, I really like JJ Redick,” he said.

If indeed Murphy can hone his inner Redick, the Panthers may be in luck — Redick has never missed the playoffs once in 14 seasons. Perhaps Murphy’s outside stroke is just what Pitt needs to start a postseason streak of its own.

“I know the guys can’t wait,” Murphy said. “We’ve got something to prove, as a team.”