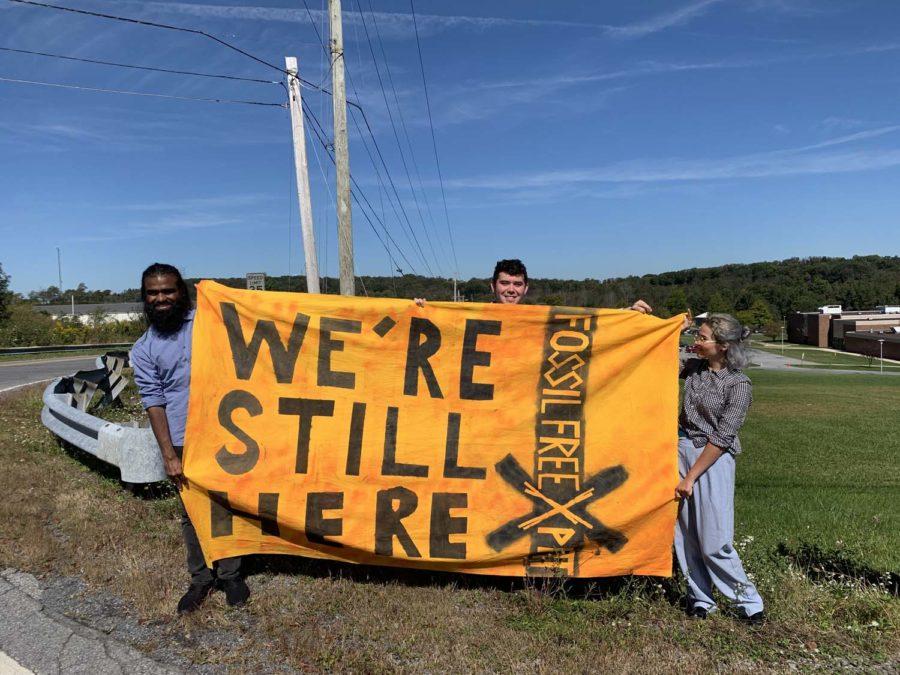 Fossil Free Pitt has formally called on the University to divest from fossil fuels by April 2020.

By Elise Lavallee and Emily Wolfe

The University of California system voted on Sept. 17 to divest completely from fossil fuels by the end of the month. The decision prompted the students who lead the Fossil Free Pitt Coalition — which has worked for years to convince Pitt to do the same — to say Pitt is out of excuses.

About 10 students from the group drove to Johnstown for Friday’s Board of Trustees meeting, where they interrupted Chancellor Patrick Gallagher’s report to demand the board vote on divesting from fossil fuels at its meeting on Feb. 28, 2020.

Eva Tansky Blum, the chairperson of the board, told the group its request needed to come through the proper channels. But Anaïs Peterson, a member of the coalition and executive vice president of Student Government Board, said Monday that the group has tried those channels without success. The group collected several thousand signatures on a petition to divest and, last year, helped pass a student referendum with the same goal in mind.

“We’ve been around since 2014 and we have been desperately trying to use the channels the University has set out for us and we have gotten nowhere,” Peterson said.

The University of California system said in a Sept. 17 Los Angeles Times op-ed that its decision was a financial one, writing that continuing to invest in fossil fuels is a “financial risk.”

The coalition said the UC system’s decision, and recent research, hurt the University’s arguments that divesting from fossil industries creates a financial risk.

The coalition said in a letter the disruptors read to administrators that if the University doesn’t meet the group’s demand, its members will take “appropriate action.”

Peterson did not say what action the coalition plans to take if the University doesn’t hold the vote or votes not to divest, but she said the group believes its efforts will be successful.

Gallagher announced in August that Pitt would work to develop socially responsible investing strategies for its endowment. The decision came after the July release of a University committee report, which recommended that the University consider “the importance of the social issue to the University community” while pursuing SRI strategies.

Coalition members released a statement at the time which said they appreciated the steps Gallagher was taking, but were disappointed that he did not specifically name fossil fuel divestment in his announcement.

“Our chief financial officer is working toward the goal of presenting the environmental, social and governance criteria to the investment committee of the Board of Trustees for consideration by February,” Pitt spokesperson Kevin Zwick told the Pittsburgh Post-Gazette Monday.

At the board meeting, the coalition read a letter to the board formally calling for the February vote and for the University to divest completely by April 2020. According to the letter, Fossil Free Pitt has worked to make the University aware of the negative impacts investing in fossil fuels can have on climate and local communities.

Fossil Free Pitt is collecting student signatures on the letter in a Google Form online, which the group is circulating along with video of its disruption of the meeting.

Yesterday we delivered our demand to @PittTweet.

Vote on fossil fuel divestment February 28th 2020 and divest all holdings by April 2020.

Join our movement. Sign onto our letter to the Board of Trustees & admin- https://t.co/7ewznTlGeY#WereStillHere #DivestPitt pic.twitter.com/Vh1U7awpWj