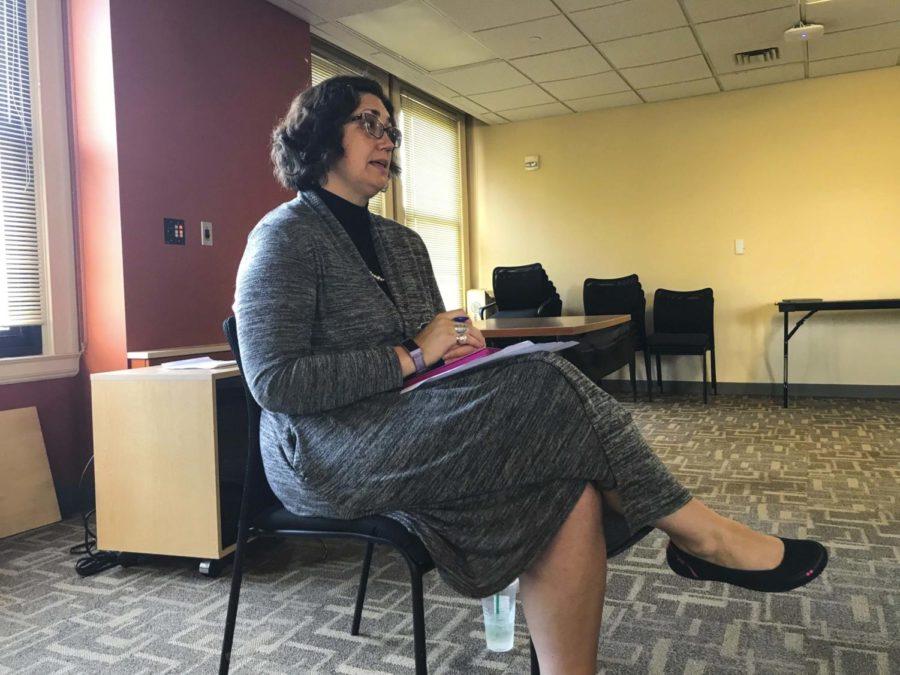 Katie Pope, the coordinator of the Title IX office, talks about the push to make her office more accessible.

For the first time since its creation in 2015, Pitt’s Title IX office released data this summer reporting its activity over the course of the school year. The numbers describe the number of reports the office received — more than 200 — along with the number of investigations it launched and a breakdown of the incidents reported.

According to Katie Pope, the coordinator of the Title IX office, the report is part of a general push to make the office more accessible to the Pitt community. A sparsely attended town hall Pope hosted Tuesday in the William Pitt Union’s sixth floor meeting room was another part of the initiative.

“We’ve been discussing in the office ways we can really be more present on campus and better ways for faculty and staff to get to know our office,” Pope said at the town hall, comparing the event to the monthly Dean’s Hour sessions hosted by Dean of Students Kenyon Bonner.

And although almost no one who wasn’t affiliated with Title IX attended, Pope said the office hopes to reach more students with other events in the future, including another town hall in November.

Pope, the first full-time Title IX coordinator at Pitt, was hired in 2015 after the amount of rape reported on campus doubled from 10 reported incidents in 2013 to 20 in 2014. The office, which has five full-time staff members, has conducted close to 90 investigations since the start of the 2016-17 school year.

According to the data from the Office of Diversity and Inclusion, Pitt’s Title IX office received 247 reports during the 2018-19 school year, launching and completing 37 investigations based on those reports. Each investigation lasted an average of 70 days. Almost half of the reports came from students, and 86% involved sexual harassment or rape. In more than 90% of cases, the report alleged misconduct by a student or a member of Pitt’s faculty or staff.

Pope said there are many reasons the office might not open an investigation based on a report. Sometimes the other party isn’t a member of the Pitt community, so Title IX can’t investigate. But usually, according to Pope, it’s the choice of the person reporting — often, victims approach Title IX seeking support or education, and don’t want to deal with an investigation.

Soon, the office will start working to evaluate the responses from the Campus Climate survey, which was sent out to all students in the spring, Pope said. Pope added she hopes the results, which Pitt plans to release in mid-October, will help the Title IX office evaluate its performance over the past several years and work to develop strategies for the future.

In addition, the office is waiting for news on the Trump administration’s updated guidance for Title IX offices at universities and K-12 schools. Pope said she was “disconcerted” by the proposed changes as announced by Secretary of Education Betsy DeVos in November, which include a requirement for parties involved in an investigation to face each other during a hearing.

The new guidelines, which met significant criticism from higher education groups when DeVos announced them, would direct Title IX offices to adopt a narrower definition of sexual harassment. Where Obama-era regulations defined sexual harassment as any “unwelcome conduct of a sexual nature,” the new guidelines would define it as “unwelcome conduct on the basis of sex that is so severe, pervasive and objectively offensive that it denies a person access to the school’s education program or activity,” The Washington Post reported last year.

“The original documentation suggested that they were going to change the definition of what constituted gender and sexual harassment under Title IX, which would make it completely different from any other civil rights law currently on the books,” Pope said.

While Pitt’s Title IX office hasn’t received direction from the federal government to implement the new guidelines yet, the direction could come “any day,” Pope said, reaching behind herself to knock on wood.

“It’s going to be a rough week,” she said. “That’s the last thing I need to wake up to tomorrow.”

Michele Welker, the coordinator of the Office of Sexual Harassment and Assault Response and Education in the Counseling Center, asked Pope about the unique situation of graduate students dealing with sexual harassment.

In her position in the Counseling Center, Welker sometimes talks confidentially with students in those situations, often in an “isolated” environment or lab where they’re working closely with just a few others. Welker advises them of their options and helps them evaluate the potential repercussions of launching a Title IX investigation, she said.

“I wanted to see what other initiatives and projects [Title IX] is working on to reach out to students to let them know that we understand their unique vulnerability, particularly in the context of a small space,” Welker said after the meeting.

The Title IX office has been working for several years to expand resources for graduate and professional students, Pope told Welker. Currently, about 85% of new graduate students undergo training and education for dealing with sexual harassment, Pope said, and the office aims to eventually make it mandatory for all new graduate students.

“Graduate students have a very special set of challenges,” Pope said. “We recognize that they often need different kinds of support, especially because, as students, they’re so closely tied to an individual faculty member who may be advising or overseeing in their research and that can make it doubly scary to come forward and make a report.”

Pitt is also working to make sure it complies with all aspects of a new sexual harassment law signed by Gov. Tom Wolf in July, which requires all universities in the state to enable online, anonymous reporting. Pitt has had that policy in place since 2015, along with the “Good Samaritan” policy also required by the law, which protects witnesses or victims who report an incident that occurred while they were under the influence of drugs or alcohol.

The University is working on adding a victim’s bill of rights to its sexual misconduct procedures in order to fully comply with the new law, Pope said.

Amy Filip, a junior sociology major who attended the event, works as a peer educator in Pitt’s Sexual Assault Facilitation and Education training program. Filip said she hoped more students would come to the next town hall, adding that she thinks sexual violence is an important issue to many people on campus.

Filip herself is particularly concerned about the possible implications of DeVos’ new Title IX guidance, she said, though she is confident that the Title IX office, which she works with, will continue to do what it can for the Pitt community.

“I know that the folks at Title IX are going to do their best to care for survivors and provide resources even under new guidelines,” she said.