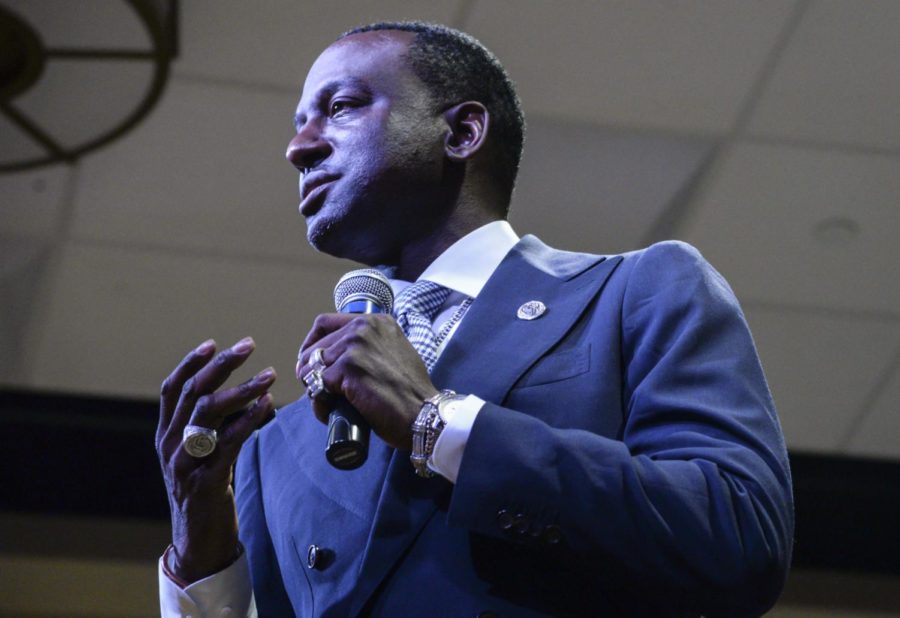 Dr. Yusef Salaam of the “Central Park Five” spoke at an event hosted by Pitt Program Council on Tuesday night.

Right up until he lost his trial, Yusef Salaam, one of the Central Park Five, believed that the system would prove him innocent.

“The word ‘guilty’ echoed so many times that I lost count,” Salaam said.

A sold-out crowd of 500 students came to the WPU Assembly Room Tuesday night to see Salaam speak about his experience being wrongfully incarcerated. In 1989, Salaam and the other four young men were wrongfully convicted of assaulting a young woman in New York’s Central Park. The five were exonerated in 2002 following the confession of the actual perpetrator. Their highly publicized case and exoneration brought about a national conversation concerning wrongful imprisonment.

He opened the event Tuesday night, which was sponsored by the Pitt Program Council, by reading the poem that he gave as his final statement during his trial in 1989.

According to Salaam, nothing that he said could have set him free.

“Because of the color of our skin, we hadn’t been given the opportunity to be seen as innocent until proven guilty,” Salaam said. “They looked at us and said ‘they had to have done it.’”

One of the things Salaam said he remembers most about his trial was the national attention that it received. Two weeks after the trial of the Central Park Five began, Donald Trump took out a full-page ad in the New York Daily News that read “Bring back the death penalty. Bring back our police.” Salaam still had the ad and showed it to the audience.

In addition to Trump’s ad, political commentator Pat Buchanan published columns in New York newspapers calling for acts of violence against the Central Park Five, which Salaam said made him feel like the nation’s rage about the trial was directed at him.

“He said ‘let’s take the eldest one and hang him from a tree in Central Park,’” Salaam said. “Then he said ‘we should take the others and strip them naked and horse whip them. Maybe this will make the city’s parks safe again.’”

All five members of the Central Park Five received letters from angry Americans. Salaam read the audience one of the letters that he was sent.

“‘This letter is to let you know that your name has been placed on the list of enemies of society by the citizen’s army, New York City branch,’” Salaam said. “‘So just remember that 20 to 30 years from now, some people will never forget. And maybe the one time that you don’t check your back is the one time that somebody might just be there to say hello.’”

Being incarcerated exposed some of the bleakest parts of humanity, Salaam said, but this did not prevent him from finding hope. While incarcerated, he said he was given time to meditate on his purpose in civil rights, and his purpose in the greater picture.

“I was taken out of the world and placed in the belly of the beast,” Salaam said. “As I look back at the journey, I am amazed because I can see the hand of God all throughout it. It is a story to show you that a person can be brought low only to rise because the truth can never stay buried.”

When a community is buried and power structures abandon it, Salaam said, it is an opportunity for that community to realize its true purpose.

“You were born on purpose,” Salaam said. “You were born with a purpose. Tied to you are the abilities that you are supposed to produce in the world.”

Salaam’s speech prompted a standing ovation from the audience, which held hundreds of Pitt students.

Their turnout didn’t surprise sophomore marketing major and PPC’s director of lectures Ellie Simmons, who led the effort to bring Salaam to campus.

“[Salaam] is an amazing man,” Simmons said. “The way he speaks, the way he can move a room, the way he tells his story is so beautiful, so I can totally understand why it sold out.”

Simmons said that she is proud to have Salaam on Pitt’s campus, as she thinks that the school’s student body represents a progressive group of young people that converge upon the ideals that Salaam speaks on. Simmons also said that she hopes that Salaam’s presence on campus will help show Pitt students that they can have a voice in the political discourse.

“I am extremely proud and think that Pitt’s campus is very diverse and very forward-focused,” Simmons said. “I think that his role here is to remind us that what we are doing isn’t forgotten.”

Following the speech, Salaam turned to the audience to ask for any questions that they had for him.

One student asked why Salaam has forgiven those who thought he was guilty and those who threatened his life.

“It seems like you forgive these wrongdoings even though you still remember the past,” the student said.

Salaam’s memories of the trial and his incarceration still feel fresh, he said, but he has decided to learn from them instead of being tormented by them.

In a similar question, Salaam was asked if he blames the prosecutors who wrongly convicted him and the rest of the Central Park Five.

“Do you or any of the Exonerated Five ever place blame on the members of the jury, or do you see them as falling victim to a lack of [a] justice system?” the student asked.

No matter what has happened in the past, Salaam said, he refuses to hold a grudge.

“We can’t change the past, but we can most certainly learn from the past,” Salaam said.

After giving students time to ask questions about his life, Salaam returned his ideas to the central theme of his speech — people must be cognizant of how they treat others, because they are the ones that have to live in this world with one another.

“Whatever we put in the earth, we are one day going to sit under the shade of those trees,” Salaam said.