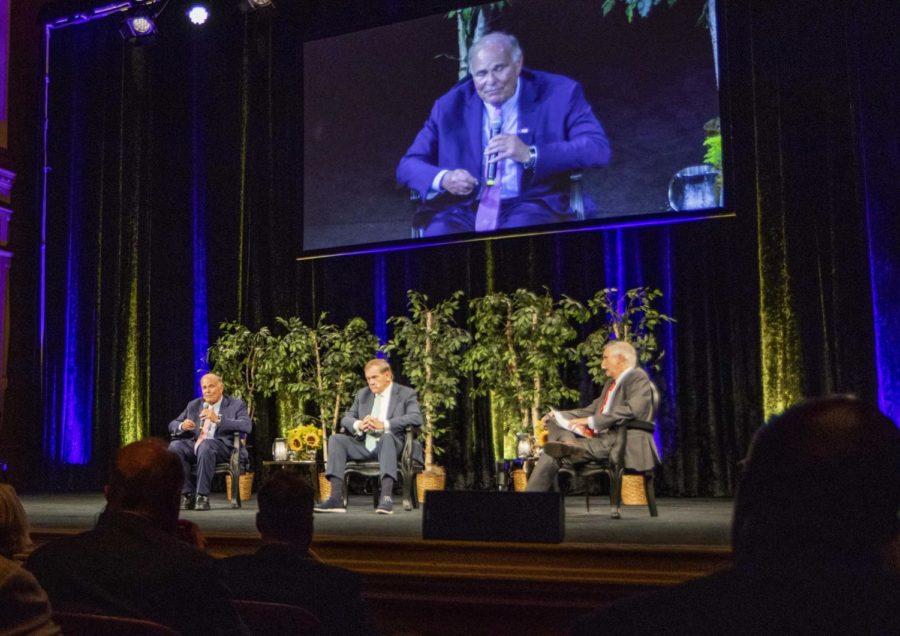 Former Pennsylvania Governors Ed Rendell and Tom Ridge answer questions moderated by Dave Davies (pictured left to right) at the Carnegie Music Hall on Tuesday night as a part of the 2019 American Experience Distinguished Lecture Series hosted by the University of Pittsburgh.

Former Pennsylvania governors Tom Ridge, a Republican, and Ed Rendell, a Democrat, called for an investigation into the impeachment of President Donald Trump over his dealings with Ukraine at a bipartisan lecture Tuesday night at the Carnegie Music Hall auditorium.

The Reflection of Leadership, Governance, and Politics lecture, hosted by Philadelphia public radio host Dave Davies and attended by about 100 people, presented a venue for Ridge and Rendell to discuss their own experiences and the current political climate. The lecture was sponsored by the Dick Thornburgh Forum for Law and Public Policy, the Office of the Chancellor and the University Honors College.

Rendell, Pennsylvania’s 45th governor and former mayor of Philadelphia, was adamant on his stance against the president. Trump was recently accused of abusing his presidential power when he called Ukranian president Volodymyr Zelensky and offered American aid to the country in exchange for an investigation into Democratic opponent Joe Biden.

“What the president admitted to is, in my judgement, a crime and it is a high crime, because he solicited a foreign country to get involved in the United States election, which is clearly illegal and prohibited by the United States Constitution,” Rendell said. “Donald Trump put the nation at serious risk to advance his own political interests.”

Ridge, Pennsylvania’s 43rd governor and former secretary of the Department of Homeland Security, was more hesitant than Rendell to condemn Trump, but said Trump’s actions mandate an investigation like the one Speaker of the House of Representatives Nancy Pelosi has initiated.

“That conversation is worthy of the kind of investigation that Speaker Pelosi has laid out on behalf of the House of Representatives,” Ridge said. “I’m not in a position to say whether it rises to the level of a high crime and misdemeanor, but I find it beyond disturbing.”

But not everyone in the audience believed Rendell and Ridge were in the position to discuss impeachment at all. Melissa Hart, a Republican and former member of both the State Senate and the House, didn’t think the discussion was a valid topic at the event.

“I wish they hadn’t tried to make Rendell and Ridge talk about impeachment because it’s not what their thing is,” Hart said. “If you want to talk about the political climate, which they did at the end, I find that more useful.”

Continuing on the overarching theme of bipartisanship, Rendell and Ridge also shared similar views on the rise of white supremacy in the United States.

Rendell said that he wants to improve and expand opportunities for African American citizens through programs, but is adamantly opposed to reparations for descendents of former slaves.

Ridge said that Americans need to call out racism, but he doesn’t see the purpose of labeling President Trump as a racist.

“If you as a leader suggest that those who come across the border are rapists and drug pushers, the conclusion you may want to draw is that this president has refused to accept the diversity of this great country,” Ridge said. “I don’t like the rhetoric. Accusing him of being a racist may make people feel good, but it doesn’t solve the problem.”

Ridge said all donations more than $1,000 should be published online for transparency, and politicians shouldn’t take donations from groups or people they aren’t comfortable with acknowledging publically.

“I think any contribution in excess of $1,000 ought to be on the internet 24 to 48 hours after you give it,” Ridge said. “I think constituents are entitled to know where those dollars of support or opposition came from.”

Rendell spent more time defending his record on campaign finance, specifically on his endorsement of the 2002 McCain-Feingold Act, a piece of legislation that regulated the funding of political elections.

After the former governors’ debate onstage finished, Pitt student Tilman Cooper said he enjoyed the lecture, even though he was one of the only students in attendance.

“I really enjoyed the event. I thought it was interesting to have both perspectives — Republican and Democrat — and for them to go about it so civilly, complementing each other and making a positive environment,” Cooper, a sophomore finance, marketing and supply chain major, said.

Hart said in the wake of 2020 Democratic hopeful Beto O’Rourke’s Oakland campaign rally last week — which drew a large number of Pitt students — she did not understand why they chose to see O’Rourke, as opposed to the experienced governors.

“If they were invited, it’s unfortunate that they would come to see a one-term Congressman from Texas who doesn’t have a clue over people who’ve been there,” Hart said. “It would have been great to have that room filled.”

Ridge noted the disparity in audience ages at the end of the lecture — noting that young people ultimately have the power in the politics of the future.

“The only thing that would have made this a better evening was if a couple thousand Pitt students had showed up,” Ridge said. “Government and politics is about tomorrow, and young people at the University of Pittsburgh have far more tomorrows than Ridge and Rendell.”