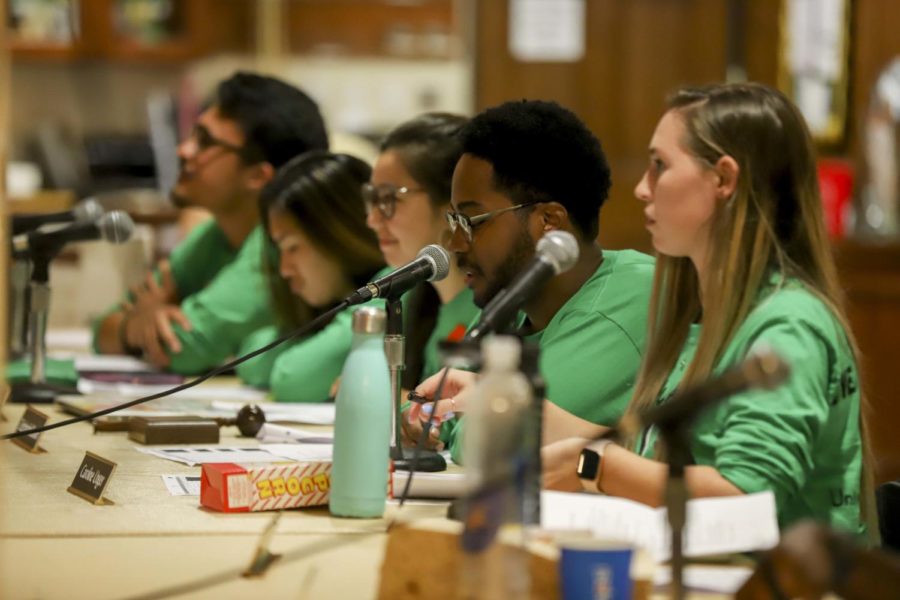 This week, the board voted unanimously in favor of Executive Vice President Anaïs Peterson’s resolution to support the fossil fuel divestment movement.

Last night’s Student Government Board meeting tied up many loose ends from prior meetings, starting with a report-back from Sunday’s task force meeting on the recent changes made to SORC naming guidelines. The guidelines would prohibit independent student organizations from including University trademarks or wordmarks like “Pitt” and “Panther” in their names.

SGB announced two weeks ago that a task force — with members from SGB and student groups, among them Pitt Sailing, Pitt Dance Marathon and Pitt Archery — would convene to discuss ways for existing organizations to keep their names. Sunday’s meeting with student group leaders proved productive, SGB President Zechariah Brown said, but revealed that student groups have desires that are at odds with those of the University.

“Most of what we found was that student groups don’t want to see any change,” Brown said.

The primary model discussed at Sunday’s meeting was a so-called “tier model,” an infrastructure that would establish a spectrum of high-to-low involvement between student clubs and the University. But student groups largely rejected this model, Brown said, since the student groups wanted their relationship with the University to remain the same overall.

Brown said benchmarking for a new policy, which has yet to be determined, will be completed by Saturday. The board will introduce the proposal to University officials on Oct. 10 and subsequently discuss it at the next SGB public meeting on Oct. 15.

Among other unfinished business from last week’s meeting was a resolution introduced by Executive Vice President Anaïs Peterson to support the fossil fuel divestment movement. This week, the board voted unanimously in favor of the resolution.

“Now we finally have this joint call from SGB and the students where we finally see this unified moment that I think is going to give us a lot of power,” Peterson said.

This vote comes in light of events at Friday’s Board of Trustees meeting at Pitt’s Johnstown campus, where Peterson and other members of the Fossil Free Pitt Coalition interrupted Chancellor Patrick Gallagher to demand the Board of Trustees vote on divesting from fossil fuels by Feb. 28, 2020 and fully divest by April 2020.

She said last week’s interruption at the Friday meeting was a result of “miscommunication” between University officials and students about how to express public opinion.

“So much of the work that Fossil Free Pitt does and the fossil fuel divestment movement is around transparency,” Peterson said. “There’s this miscommunication between students and the Board of Trustees of what we view as proper channels of communication.”

She said the Tuesday passage of the resolution is the first step in the University being accountable to students. She cited last year’s SGB election, in which more than 90% of students who voted in a referendum were in favor of divestment.

“We’re prioritizing students,” Peterson said. “It’s all about making sure that Pitt’s a university that’s accountable to students and not running like these corporations where they don’t listen to us.”

Among newly proposed initiatives at the meeting is the Pitt Civics task force, introduced by board member Scott Glaser. Pitt Civics would be a collaboration between Pitt Civics Club and SGB to make civic engagement opportunities more accessible to the general student population.

Glaser said this collaboration is the logical next step for the Pitt Civics Club.

“Pitt Civics as a club reached a standstill in which we’re not really sure where to turn,” Glaser said. “We’re hoping to bring it through SGB to give it some more force.”

“Civically engaged students are better students. But the issue is that the University only promotes civic engagement opportunities to a certain select group of people,” Glaser said. “We want to get Pitt to be a better civically engaged population.”

Judicial Committee Chair Grace Nelson also said the board will research University policy regarding excuses for missed work and absences for religious reasons. The Pitt News reported last week on difficulties that Jewish students face when making up missed work or absences due to observing High Holy Days.

“We’re still in a phase of trying to review that policy … to better understand whether, first, intervention is necessary on the part of our committee on the Student Government Board, and second, what the scale and necessity really is,” Nelson said.

She said SGB is working with students and faculty to determine how the policies affect students.

“The goal is to understand whether these policies are best serving the student population, and if they’re not, how we can mitigate that situation,” Nelson said.

Brown closed Tuesday’s meeting with a reminder that October is Mental Health Awareness Month. Throughout the meeting, board members and chairs provided lists of events this month that focus on mental health.

“As this month focuses on mental health, I’d like to implore all of you to make that your priority, not just for October but for every month following this,” Brown said.

Filipino Students Association requested $9,546.46 to host podcaster Megan Batoon on campus. The board approved $9,544.46 and denied $2.

Women’s Ultimate Frisbee Club requested $1,886.75 for travel and lodging at the Blue Ridge Finale tournament. The board approved in full.

Active Minds requested $2,500 to host spoken word poet and author Sierra DeMulder on campus. The board approved in full.

Some of God’s Children Gospel Choir requested $2,915 to host their annual fall concert. The board approved in full.