What are the Odds: Avenging last week’s picks 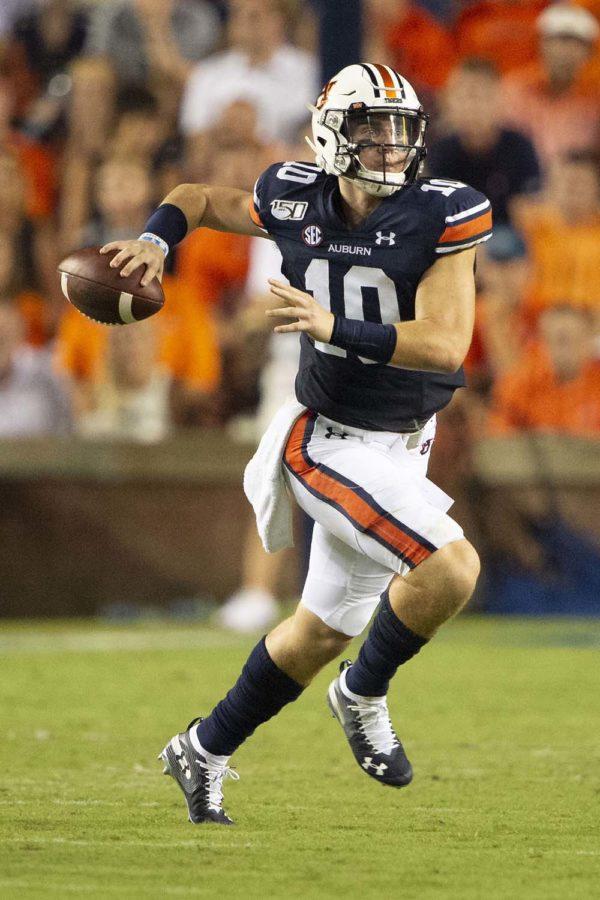 Auburn quarterback Bo Nix (10) looks to throw a pass against Mississippi State at Jordan-Hare Stadium in Auburn, Alabama, on Sept. 28.

One word for last week — yikes. I hope you bet against me, because the result was a perfect 0-fer. But my luck has to turn around eventually, and this week seems like a perfect place to start.

I will never look at last week’s picks ever again. If for some reason you’re curious about how it turned out so poorly, check them out here.

Anyways, let’s get to it.

A quick recap for those who are new to everyone’s favorite degenerate pastime — we’ll be looking primarily at spreads, money lines and over/unders for this series. Spreads are adjusted according to who oddsmakers favor in the matchup and by how many points. Money lines are straight bets on a team to emerge victorious. Over/unders, also referred to as totals, are wagers on the total number of points scored in any given matchup.

All line info used in this series is courtesy of OddsShark.com. The Pitt News does not condone illegal gambling. Sports gambling is illegal in Pennsylvania under the age of 21.

My days of doubting the Tigers are done. After making me look silly on the road against Texas A&M two weeks ago, Auburn came home and smoked Mississippi State, 56-23, scoring three touchdowns on its first eight offensive plays. First-year quarterback Bo Nix still has a long way to go, but he has continued to grow and mature five games in, helped by sophomore running back JaTarvious Whitlow.

Both teams’ defenses have impressed so far, but Florida’s offense is still unsteady with backup junior quarterback Kyle Trask. The Tigers have a tough road to the Playoff, but if they go into the Swamp and emerge victorious, they would cement their position as bona fide contenders.

Texas Tech’s defense couldn’t seem to remember how to tackle last week against Oklahoma and won’t find the task any easier this week against Oklahoma State and breakout sophomore running back Chuba Hubbard. Hubbard has been sporting video game numbers, with three games of at least 200 yards on the ground and an average of 7.3 yards per carry. Look for head coach Mike Gundy’s Cowboys and Hubbard to put up some eye-boggling numbers on the ground and cover on the road.

Boston College cost me as well last week, covering the 6.5-point spread against Wake Forest with a three-point loss. The Eagles have been fairly steady this year aside from their Kansas loss, led on the ground by junior running back AJ Dillon, who averages just over five yards per carry.

The Cardinals are coming off a loss to Florida State in which they allowed three touchdowns and 112 yards to junior running back Cam Akers. Akers is a top-tier talent, but Dillon is in the same league. Head coach Steve Addazio and Boston College have shown they can hang around and keep it close, so take the points for the road team.

Of the eight new head coaches this season in the NFL, five remain winless heading into Week 5. Two of those coaches square off this week in Arizona’s Kliff Kingsbury and Cincinnati’s Zac Taylor.

Kingsbury has had a slightly more positive start to his tenure than his counterpart in Cincy, pulling off a comeback tie in the opener against Detroit and only losing by one score to Baltimore the week after.

To say the Bengals have struggled under Taylor would be a massive understatement. They managed to keep it close against both Seattle and Buffalo, but suffered blowout losses at the hands of San Francisco and the division rival Pittsburgh Steelers.

Given how surprisingly effective Mason Rudolph looked for Pittsburgh, Kyler Murray and Kingsbury should be able to devise an effective pass attack that keeps Cincinnati’s secondary on their heels. The Bengals rank second-worst in the league with 19 sacks allowed, setting up a golden opportunity for Arizona’s veteran defensive front led by Chandler Jones and Terrell Suggs.

With Josh Allen still in concussion protocol, Buffalo’s already stagnant offense will be even more questionable with backup Matt Barkley under center. The Titans and Marcus Mariota seemed to find their groove last week on offense, beating Atlanta 24-10. Derrick Henry put up his first 100-yard rushing performance and rookie A.J. Brown and Corey Davis combined to haul in the Titans’ first three receiving touchdowns of the season. But both Tennessee and Buffalo sport top defenses, ranking fourth and fifth in scoring defense with 15.5 and 15.8 points allowed per game, respectively. Both offenses will struggle in a tight, low-scoring game.