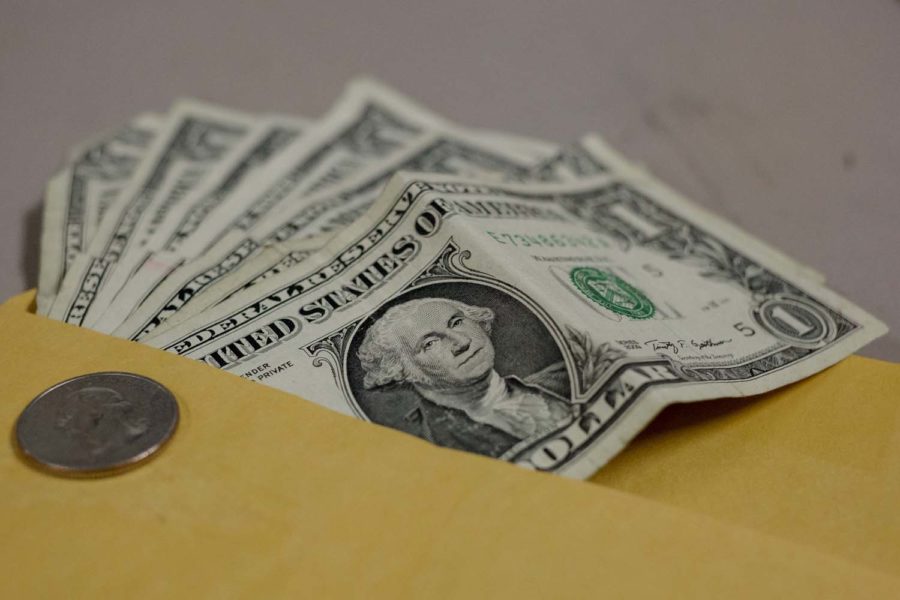 Minimum wage is $7.25 in Pennsylvania.

In the span of five minutes, Emily Morris, a senior political science major, said she organizes a bundle of sweatshirts, answers several customers’ barrage of questions and rings up orders while working as a cashier at the University Store on Fifth. Repeat this 12 times, and she’ll have made $7.25.

“Life costs a lot of money,” Morris said. “I don’t know what they expect us to do, work eight jobs just so we have enough money to live?”

At Pitt, both part- and full-time undergraduate students taking at least six credits are eligible for employment through the University. These part-time jobs allow them to work a maximum of 20 hours a week and compensate students between $7.25 and $10 an hour.

Many students at Pitt start their employment earning minimum wage, and not all are satisfied with this compensation. Lauren Daniele, a senior anthropology and Spanish major, works an average of 15 hours per week in the Towers mailroom, organizing and delivering packages for minimum wage. She said she feels fortunate to need this job only to fund non-essential expenses, but believes the minimum wage should be increased to help students working to pay for basic necessities.

“Thankfully my parents pay for a lot of things, but a lot of kids at this school aren’t as lucky as I am, where I’m just working this job to make a little extra money,” Daniele said. “I think the minimum wage should be raised not just for increasing my free time and paying me more money, but opening opportunities for more kids.”

In Pennsylvania, the minimum wage has remained a constant $7.25 per hour since 2009, despite nationwide movements like the “Fight for $15” and increases in wages across neighboring states like Maryland and New Jersey where the minimum wage will reach $11 in both by Jan. 1.

Morris found that the lower wages in Pennsylvania were difficult to adjust to when she moved from Massachusetts, leading her to feel pressured to show up to work even when she felt sick.

“I come from Massachusetts where the minimum wage is $12 per hour, so it was an adjustment,” Morris said. “I understand that the cost of living in New York City is higher than Pittsburgh, but it seems a little unfair. There have been times when I’ve not felt well and I think about calling off my shift … but I have to go because I can’t not make that money.”

This make or break sentiment hasn’t always been the case. According to a college affordability study published by the Urban Institute, in the 1960s and 1970s students working at the minimum wage for approximately 10 hours per week during school and 35 hours a week over the summer could fully pay for tuition and room and board at an average public four-year university. Today, the same amount of work would cover 57% of tuition and 27% of fees at the same universities.

Jeffrey Shook, associate professor in the School of Social Work, is researching the impact of a minimum wage increase for Pittsburgh hospital service workers as a part of the ongoing “Pittsburgh Wage Study.” Shook said that minimum wage is not a living wage for anyone, including college students.

“I don’t think it’s anywhere close to a living wage,” Shook said. “A lot of college students are trying to live on a day-to-day basis and the minimum wage is nowhere close to allowing them to do that.”

But not all students agree. Colin Kaminsky, a junior marketing major who works as a guest relations assistant at the William Pitt Union, said he agrees with the University’s decision to pay students the minimum wage required by the state and doesn’t think a pay increase is necessary.

“I don’t think the minimum wage should be increased. $15 per hour for a minimum wage job seems absurd,” Kaminsky said. “I get paid to sit here and help people with things and I’m lucky enough to have some down time to get some academics done for school.”

The fight for an increased minimum wage is met with several arguments, such as that minimum wage jobs don’t warrant more pay, or that raising minimum wages could cause job losses by forcing small businesses to close and large businesses to hire less employees. Morris said she understands this argument from an economic standpoint, but that living on her current wage is a near impossibility.

“As a political science major, I understand the reasons people say it shouldn’t be raised because it costs a lot of money,” Morris said. “But at the same time, I’ve tried going paycheck to paycheck, and there’s no way it’s possible.”

For Morris, paying for these expenses as a student just got a little more difficult. Pitt recently increased tuition for students between 2.75% and 7%, depending on the school and students’ residential status. Out-of-state students were at the higher end of this increase.

In light of this tuition increase, Shook said higher paying jobs are more important than ever for students to afford basic necessities.

“Raising their wage is an acknowledgement that students are taking on big debts, that families are really struggling to pay tuition,” Shook said. “Some people can’t access higher education because of the costs at a place like Pitt.”