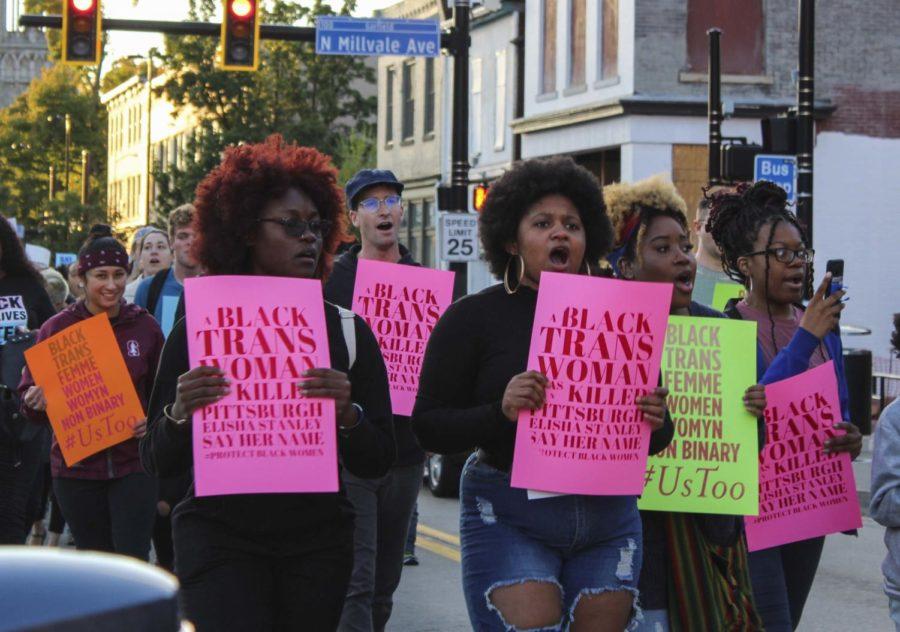 About 100 people met at the intersection of Main Street and Penn Avenue in Bloomfield Friday evening to show support for black and trans women.

By Carolyn Brodie, For The Pitt News

In the weeks following the release of a Pitt report which said black residents experience a lower quality of life in Pittsburgh than in other cities, multiple incidents of apparent violence against black women in Pittsburgh have seemed to underscore the study’s point.

First, two black women were assaulted at an ExxonMobil gas station on the North Side by the station’s owner and employees. Allegheny County District Attorney Stephen Zappala charged the three men involved with simple assault in late September — charges many say are too lenient.

Then, reports started to circulate that Elisha Stanley — a black trans woman whose body was found in downtown Pittsburgh on Sept. 16 — had been the victim of foul play.

About 100 protesters met at the intersection of Main Street and Penn Avenue in Bloomfield on Friday evening, fed up and demanding change. They marched across the neighborhood chanting and wielding signs to show support for black and trans women, demand the recall of Zappala and encourage the elimination of gentrification in Pittsburgh. Some protesters’ signs read “Black, Trans, Femme, Women, Womyn, Non-Binary, #UsToo” and “Respect and Protect Black Women.”

Local black activists organized the “Protect Black Women March & Protest,” which was promoted on Facebook in response to larger systemic issues of discrimination as well as three recent incidents in particular — Stanley’s death, the ExxonMobil attack and a recent report by Pitt researchers.

Jalissia Haynes, a senior studying politics and philosophy and one of Friday’s protesters said Stanley’s death was further proof of the Pitt study’s findings.

“Don’t make us move. We don’t want to move,” Haynes said. “Make this City livable for us.”

Haynes said she thinks it is important for the Pitt community to rally around the black community after the publication of the report.

Following the march, participants gathered in the street at the intersection Penn Avenue and South Winebiddle Street to light candles for black trans women killed across the United States and for black women murdered in Pittsburgh. There, organizers of the protest read from demands listed on a large scroll of paper.

Their demands included that the City of Pittsburgh “take the same initiative that Black women and girls are taking in regards to the race and gender equity report,” that the DA charge the men responsible for the ExxonMobil attack with aggravated assault and that all assaults against black women be fully investigated and prosecuted. Organizers also demanded that black women be involved in discussions, agendas and decisions that directly impact them.

“[Stanley’s death] was something that really didn’t get very much press, and that is common when there is a trans person, especially a black trans woman, who is the victim,” Innamorato said.

Jordan Fields, a Pitt senior studying political science, said she came to the march to show support for the black and trans communities.

“As a black woman, after watching the video at the ExxonMobil, I wanted to come out to march and support other black women, trans women and female-identifying persons, because I know how hard it can be [to exist in some of these communities],” Fields said.

Fields said she believes that allies can do their part to be supportive of black, trans and femme communities.

“If you see something, say something,” Fields said. “Give black women the microphone, because oftentimes our voices are not heard.”