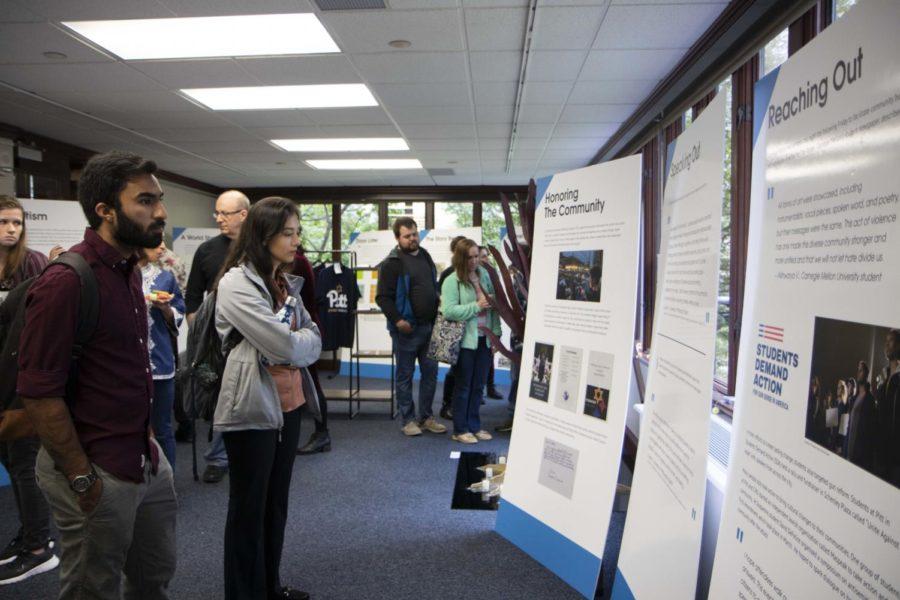 “To Those Who Grasp It: Responding to October 27” is a traveling exhibit that will be located in the Kimbo Gallery in the William Pitt Union until Oct. 16, then it will be moved to the Department of History in Posvar Hall until Dec. 6.

By Sarah Berg, For The Pitt News

Caroline Mead’s father is a police officer who responded to the Oct. 27, 2018, massacre at the Tree of Life synagogue in Squirrel Hill. In a speech at the opening of an art exhibit in tribute to the massacre, Mead said it was this connection that drove her to help with the exhibit’s creation.

“Ever since the attack happened, I wanted to do something,” Mead said. “It seemed an event so great that any efforts that I could make seemed futile, and this was the one way that I could do what I do best and contribute to something in the bigger picture.”

The exhibit, titled “To Those Who Grasp It: Student Responses to October 27th” opened Sunday in the William Pitt Union’s Kimbo Gallery. It was created through the efforts of six undergraduate students and three artists during 12 weeks over the summer. It consists of informative posters, art pieces and artifacts meant to help the public understand the context leading up to the massacre and various responses to it.

The Tree of Life massacre took the lives of 11 Jewish worshippers attending Saturday services at the synagogue. It occurred in a close-knit city neighborhood known for its acceptance and tolerance, but is the deadliest attack ever on the Jewish community in the United States, according to the Anti-Defamation League, a nonprofit that fights anti-Semitism.

Pitt’s Office of Undergraduate Research first put out the call in March 2019 for students to apply to research the Tree of Life massacre and to create an exhibit based on their findings for display. Mead, as well as other Pitt students, including Emily Dickson, Kruthika Doreswamy, Maja Lynn, Drew Medvid, Liam Sims and Claire Singer created the exhibit. A private donor paid for the project.

In the now-open exhibit, posters detail the histories of the congregations that were attacked, the neighborhood of Squirrel Hill and prevalence of anti-Semitism and white supremacy in Pittsburgh as well as at Pitt and other college campuses. Quotes from students, official statements and displays of merchandise created last October showcase the reactions from various communities and universities in Pittsburgh.

Interactivity is also strongly encouraged throughout the exhibit. Stones — traditionally placed by Jewish people on gravestones — are provided to attendees, strings are available to be tied around attendees’ wrists to show solidarity and a station at the end of the exhibit provides prompts for reflection.

Mead, a junior architectural design and studio arts major, worked on a sculpture in the exhibit. The piece incorporates mirrors and birch wood in the shape of a tree with outstretched roots — standing for “faith, honor and integrity” and “growth, resilience and the great depths that roots can reach.” She said she worked on her art with the goal of self reflection, particularly in the larger context of the exhibit.

“The main point that people can gain from interacting with this piece is the moment of reflection,” she said. “So not only physically reflecting on yourself, but you’re surrounded by these artifacts, these news stories, these other responses, so you’re forced into this moment of reflection.”

Another student involved in creating the exhibit, Emily Dickson, got home from religious services in Squirrel Hill on the day of the massacre and stared at her walls, not knowing what to do. She attributed her participation in the exhibit to a creative drive following what happened.

“I wanted to put something on the blank wall that I was staring at,” Dickson, a junior history and political science major, whose primary responsibility was graphic design for the exhibit, said. “I wanted to create something out of this.”

Dickson said the exhibit’s creators have several messages that they hope the public can take away from their work.

“There is no one response. Every single person had a different response and all of those responses are valid,” Dickson said. “Anti-Semitism is a relevant and pressing issue … it’s a thing that people have to deal with every day in our contemporary society.”

Dickson said another main goal of the project is to amplify student voices both through frequent references to student reactions to the events and by having students design the exhibit.

The students’ and artists’ work reflecting on the attack will be on display in the WPU until Oct. 16, after which the exhibit will be relocated to a display space in the Department of History in Posvar Hall until Dec. 6. In the spring, the exhibit will be shown at Carnegie Mellon University.

Sylvia Freeman, a December 2018 graduate of the Dietrich School of Arts and Sciences and former illustrator at The Pitt News, worked with Mead on her sculpture. She emphasized that students should pause and reflect on the events of last October.

“Last year a lot of people changed their profile pictures and made T-shirts and it was a really great outpouring of community and support, but it’s still like, you can’t change what happened,” Freeman said. “And so I think … it is just a way to have people come back and pause and think about it again.”

For attendees like Chinmayi Venkatram, the exhibit achieved these goals.

“I thought it was very educational for people who aren’t as aware of anti-Semitism and white supremacy,” Venkatram, a senior sociology and global studies major, said. “I think it was also very moving and powerful in terms of how youth in Pittsburgh were reacting to this tragedy.”

Though Venkatram is not Jewish, she said her life was directly affected by the massacre — her roommate, Claire Singer, is one of the students involved in the creation of the exhibit, and many of her friends from home are Jewish.

“I was seeing them struggle every single day,” Venkatram said. “That shooting was a lot for me to handle — trying to be there for my friends in a way that was appropriate and supportive.”

Kayla Grutkowski, a junior psychology and neuroscience major who attended the exhibit, said she was shocked when she first heard about the massacre.

“I’m not really used to any type of violence, so, coming here, that was a really big shock to me,” she said. “Especially with it being so close in a neighborhood that I do go into a lot, it was very shocking.”

Grutkowski said that she didn’t know much about the massacre before visiting the exhibit but learned a lot after visiting. She said that the importance of the exhibit also stems from its reflective nature.

“It wasn’t something that just happened that people forgot about right away,” she said. “It’s really nice that people are still paying their respects.”

A previous version of this story referred to the patron of the exhibit as The Gilboa Fund. The patron is a private donor. This article has been updated to reflect this change. The Pitt News regrets this error.