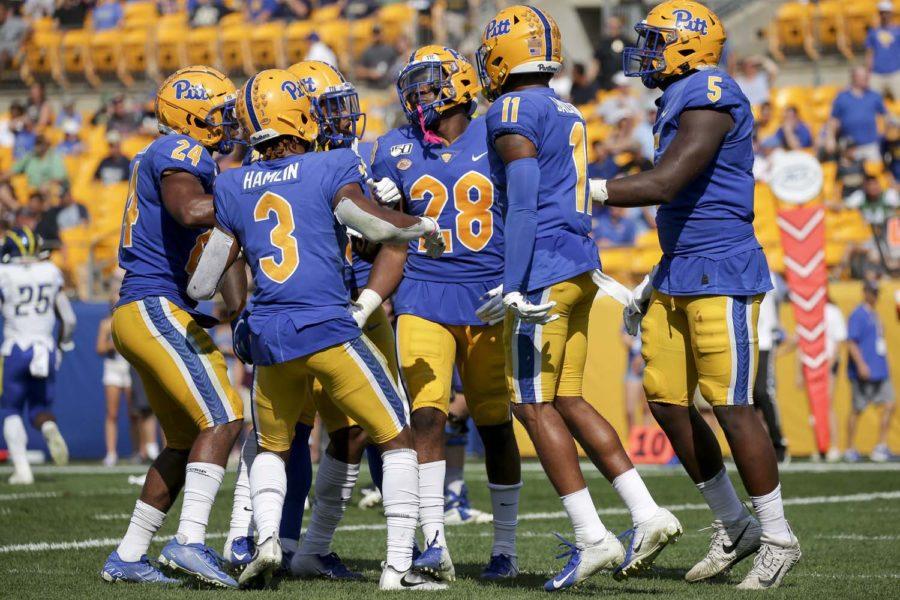 With three sacks, Pitt’s front seven put up the most tackles behind the line on Duke quarterback Quentin Harris for the season during Saturday’s 33-30 victory over the Blue Devils.

The Panthers escaped Durham with a key ACC Coastal victory over Duke, 33-30, on Saturday night. Pitt dominated early and by the third quarter led 26-3. The Panthers proceeded to give up 27 unanswered points, only to rally for the game-winning touchdown in the last 30 seconds. It was a nail-biter of a game, but Pitt found a way to pull through off a strong performance from its defense and a timely game-winning drive.

No one has known what to expect from the Panther offense all season long, and Saturday’s game proved that.

There were times when junior quarterback Kenny Pickett looked like Russell Wilson in the pocket, bobbing and weaving through defenders before delivering picture-perfect passes to receivers on the run. But there were also times when he was missing wide-open receivers, holding the ball too long and forcing inside shots that were easily intercepted.

Duke especially suffocated Pickett during its scoring run of the third and fourth quarters, but he rebounded in crunch time to orchestrate a beautiful four-play, 82-yard drive to win the game. The Panthers will need better consistency from Pickett in the future if they want to continue their momentum, especially against higher-ranked opponents.

Pickett wasn’t the only one to blame — the entire offense was equally unreliable. Senior wide receiver Maurice Ffrench had a decent game, finishing with 10 receptions for 54 yards, including a circus catch and a long punt return, but he also suffered numerous drops and muffed a punt return.

Versatile sophomore V’Lique Carter was bottled up for most of the game, ammassing only 18 yards on 13 carries. Eventually he saved the day with the game-winning touchdown by way of a nifty spin move to shake a defender and find the end zone.

The only Panthers on offense to provide a true 60-minute effort were junior receiver Taysir Mack and sophomore running back Todd Sibley Jr. Mack has stood out as a consistent playmaker all season long, and the rest of the offense should take notes.

The story of 2019 so far has been Pitt’s defense carrying the unreliable offense, and the Panthers must find some sort of stability on that side of the ball if they want to break into the top 25.

Paris Ford had himself an interesting game.

Statistically, it was a breakout performance for the sophomore defensive back, despite fumbling a punt return. He finished with 12 tackles and two interceptions, one of which was returned 26 yards for a touchdown. Both interceptions came in the first quarter and were his first forced turnovers as a Panther.

But in the fourth quarter, Ford was ejected for a targeting hit on Duke junior Scott Bracey. The call was questionable, as it appeared Bracey lowered his head and Ford led with the shoulder anyway, but the call stood and he was tossed from the game.

Ford was visibly angry after the ejection call, bouncing up and down while his teammates struggled to hold him back. He was either yelling at the referees or trying to hype up his teammates, but in any case he was so upset that he needed a police escort to exit the game. Immediately after he departed, the Panthers let up a 44-yard touchdown as senior quarterback Quentin Harris connected with junior running back Deon Jackson.

Needless to say, Ford is an integral piece of Pitt’s stout defense, and he plays with more passion than anyone else on the field. He’s always been that kind of player, but only recently have his numbers began to back up his personality. The college football world is starting to take notice, as he was selected to the Pro Football Focus Eckrich defensive Team of the Week along with teammate sophomore linebacker Cam Bright.

Ford has evolved into not just a standout player, but a leader for one of college football’s top defenses. Now he just needs to keep it up.

This season has been nothing but close calls for the Panthers. Pitt has now finished within 10 points of its opponent in every game since a 30-14 season-opening loss to Virginia. Despite this, the Panthers are finding ways to close out sloppy games with wins.

Pitt has shown a habit this season of playing up or down to its opponent. This can be a valuable trait when facing opponents who might be viewed as superior on paper, such as Penn State or Central Florida. Pitt gave Penn State a run for its money in Happy Valley, losing by just seven, before coming back to defeat UCF, 35-34, on the miracle play dubbed “The Pitt Special.”

But in games where the Panthers are favored to win, this whole playing-to-your-opponent routine becomes frustrating for Pitt fans. They almost blew a game in which they began as nearly 30-point favorites against Delaware, and they nearly choked again on Saturday against Duke.

Against the Blue Devils, things looked very bleak for Pitt as the team helplessly sat back and watched its 23-point lead melt away. The entire stadium was rocking while the Blue Devils grabbed sole possession of the game’s momentum for the entirety of the fourth quarter. But for the third straight game, the Panthers took a deep breath and put together a game-winning drive to leave Durham with a win.

Since the heartbreaking loss at Penn State, Pitt has found a way to close out tight games, regardless of the strength of opponent. These close calls are an effective way to raise the blood pressure of Pitt fans everywhere, but wins are wins nonetheless. Pitt must continue to salvage victories out of 50/50 games, although a blowout or two along the way wouldn’t hurt in easing the minds of fans.

Pitt has a chance to iron out the mistakes this week in practice as it has a bye before traveling to Syracuse to take on the Orange in the Carrier Dome.