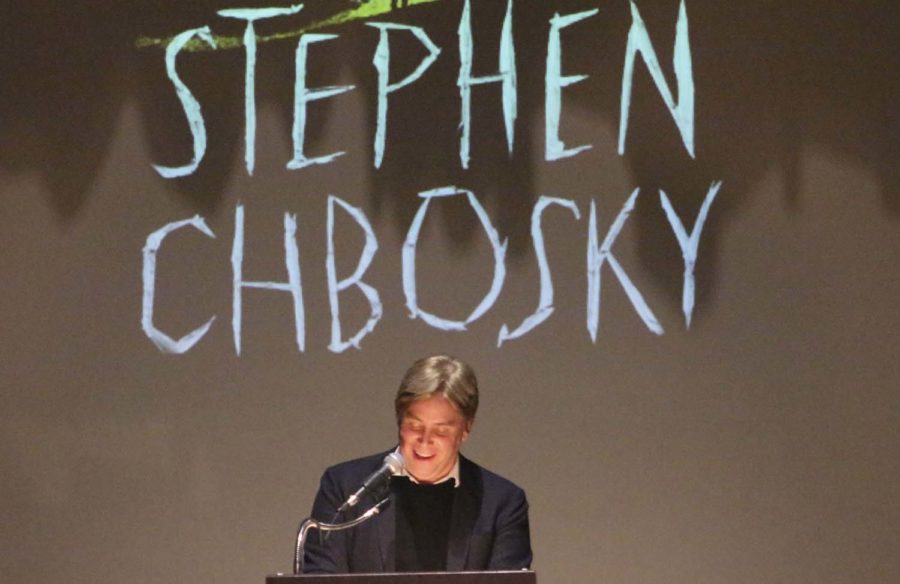 Stephen Chbosky, author of “The Perks of Being a Wallflower,” speaks about his new book, “Imaginary Friend,” at Carnegie Library Lecture Hall on Monday evening.

Twenty years after the release of the New York Times Bestseller “The Perks of Being a Wallflower,” author Stephen Chbosky is back with his second novel, “Imaginary Friend.” The novel is a stark contrast to Chbosky’s previous work, as he delves into the horror genre.

In promotion of the new book, Chbosky stopped by the Carnegie Lecture Hall in Oakland on Monday evening to read an excerpt from “Imaginary Friend” and answer questions from fans.

To fans, and especially fans from Pittsburgh, Chbosky is kind of a big deal. He is a Pittsburgh native who grew up in the Upper St. Clair suburb about 15 miles outside the City. Both the book and film versions of “The Perks of Being a Wallflower” feature iconic snapshots of Pittsburgh, which brings the story even closer to the hearts of local fans.

Not only has he written a bestseller, but he also directed and wrote the screenplay for the film adaptation of “Perks of Being a Wallflower,” wrote and directed the 2017 film “Wonder,” and wrote the screenplay for the 2017 live-action adaptation of Disney’s “Beauty and the Beast.” But long before Chbosky was literary and film royalty, he was a student at Upper St. Clair School District.

The beloved writer and filmmaker now resides in Los Angeles, but looks back on his memories of growing up in Pittsburgh fondly. He shared stories of writing and reading for the first time in elementary school, shouting out his teachers by name. One of the teachers he mentioned was in the audience Monday night. Robin Pleta was Chbosky’s third grade teacher, and he said he remembered her in-class library as his first introduction to literature.

Chbosky’s third grade year was Pleta’s first year teaching, and at the time she was known as Mrs. Ferguson.

“Mrs. Ferguson is incredibly special to me and I never forgot her,” Chbosky said. “I’m grateful to her forever because she created her own library inside the classroom, and I remember I brought in so many Snoopy books, that she just said ‘you gotta take these home.’ But my first real literary discussions I ever had were about Snoopy and Charlie Brown with Mrs. Ferguson.”

For Pleta, seeing her former student on stage was surreal, rewarding and exciting.

“This is what every teacher dreams of,” Pleta said. “Especially an elementary school teacher, in third grade, we don’t, as often, get to see our students blossom like they do at the high school level. But to think that, it was my very first year of teaching, and I still remember his blonde hair and his parents were so nice. I still have two of the Christmas ornaments that he gave me that first Christmas.”

Pleta was not the only educator in attendance for Chbosky’s reading. Many teachers and administrators from his alma mater were in attendance, as well as Claire Lyskava, a high school English teacher at City Charter High School in Downtown. Lyskava brought a group of students to the reading, since she teaches “The Perks of Being a Wallflower” in class. However, the book also holds significance to her in her personal life.

“‘Perks’ was originally given to me in the summer of 2004 by my oldest friend, before I left to be a freshman at Penn State. We’d been friends since kindergarten and she gave me a copy as my going-away-to-college present, and now 14 years later I teach the book,” she said.

Though “Perks” is Chbosky’s most well-known work, it was not the center of Monday’s event. The star of the show was the new novel “Imaginary Friend,” which is a departure from the teen drama of “Perks.”

“I am excited for the new book, I think it’s so interesting that it’s a departure from what he’s done before. I’m used to, both with ‘Perks’ and with ‘Wonder,’ them being a little bit more realistic fiction,” Lyskava said. “It’s interesting that he took a turn into the supernatural.”

After an introduction to the reading, Chbosky read a chapter from the new novel, enticing fans with the chilling tales of youth horror. “Imaginary Friend” follows a young boy named Christopher through his adventures into the woods alone, only to disappear for days. Christopher starts to hear voices as well, which he believes to be imaginary friends, but one can infer that it might not be that simple in a horror novel. Despite the scary elements of the book, Chbosky believes he holds on some of the best elements of “Perks” in the new novel, especially in terms of creating relatable characters that readers can learn from.

“A lot of people know my work in terms of the emotion that I bring to the characters, and the emotional storytelling I bring with them. In this case, I went back to a very early love of genre, a love of horror and Stephen King,” Chbosky said in an interview before the event. “What I really wanted to do was create characters that you love and care about, like I have throughout my whole career, and then put them in jeopardy.”

After spooking the audience with a reading from “Imaginary Friend,” Chbosky answered questions. Fans asked him about everything from advice for entering the film industry, to representation in film to the importance of creativity in education. To finish out the evening, Chbosky surprised fans by reading a new addition to “Perks” that he wrote for the special 20th anniversary edition.

The excerpt said the main character, Charlie, who was emotionally troubled, had “made it,” — that he was sad at one point and needed help, and he got it. Chbosky sent the message that Charlie was okay, and the reader will be too. After the event, he signed copies of both the new and old novels, and the line wrapped all the way around the building’s hallways.

For Chbosky, being back home gave him the opportunity to do more than just interact with fans, friends and family. His trip also meant that he could spend the evening after his event taking advantage of the novelties Pittsburgh offered to him growing up, many of which inspired parts of both “Perks” and “Imaginary Friend.”

“I love to drive through the [Fort Pitt] tunnel,” he said, referencing an iconic scene from “Perks.” “I did it twice last night, and I’ll do it again tonight. I went to Eat n’ Park, I had a Saris chocolate pretzel, and tonight after my event, I’m going to get cheese fries at The ‘O.’ I cannot wait. They are my favorite in the world.”