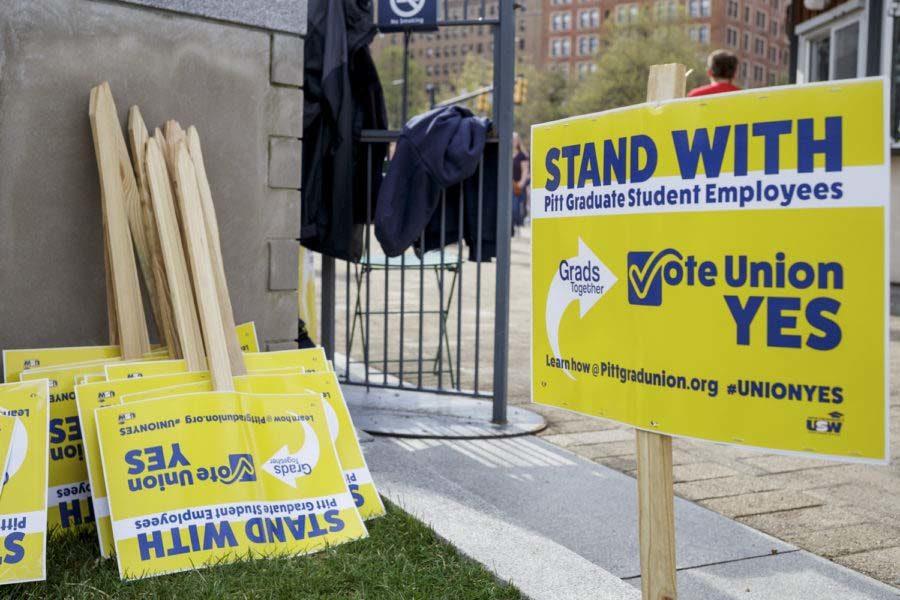 Pitt filed an exception Tuesday to a proposed ruling by the Pennsylvania Labor Relations Board issued in late September, which would have found the University guilty of three unfair labor practices during Pitt’s graduate student union election in April and resulted in a new election taking place. The University is asking for all findings from the proposed ruling to be set aside, arguing that they are contrary to well-established Pennsylvania law.

In his proposed ruling, Hearing Examiner Stephen Helmerich said Pitt committed “coercive acts” leading up to the April unionization vote, which was meant to determine whether or not graduate students at Pitt should unionize and join the Academic Workers Association of the United Steelworkers.

Pitt’s Graduate Student Organizing Committee kicked off its unionization effort in 2016 and filed for a union election in December 2017. Its reasons for wanting a union included higher wages, increased benefits, greater transparency and increased protections against discrimination and harassment. The outcome of the initial vote among graduate students was 675 for and 712 against.

Nine of 12 allegations pressed by union organizers against the University at a PLRB hearing in May — including irregular voter identification practices and using administrators as poll watchers — were ultimately found to not be unfair labor practices in Helmerich’s proposed ruling.

But Helmerich said three of Pitt’s practices leading up to, and during, the election could have “potentially affected a large enough pool of eligible voters for the effect on the election to be manifest due to the extreme narrowness of the result.”

University spokesperson Kevin Zwick said in a statement that Pitt believes it has acted appropriately through the graduate student unionization process.

“All of the communications in question are accurate, appropriate, and factual,” Zwick said. “The University looks forward to a closer review — with full context considered — of these three counts in question.”

The University stands by its belief that graduate students are not employees and therefore cannot unionize. Pitt’s Office of University Counsel paid “union-busting” law firm Ballard Spahr $239,061 in fees between the summers of 2016 and 2018 to provide legal support during the separate graduate student and faculty campaigns for unionization, according to University financial disclosure reports obtained by The Pitt News.

Ben Case, a teaching fellow in the sociology department, said he was “extremely disappointed” that Pitt filed an exception to the proposed PLRB ruling.

“The University is continuing to spend so much time and money to delay the process for a new election, especially after having violated graduate students’ rights during the first election,” Case said. “This is yet another in a series of efforts by Pitt to silence the graduate students and prevent us from exercising our rights as workers.”

Helmerich found that a chart on a Q&A website created by the University — which he described as a “substantial departure from the truth” — constituted an unfair labor practice.

Pitt argued in its filing that similar content was distributed by the University, but since that content was not ruled as an unfair labor practice, neither should the chart.

“It is contradicted by his own factual findings regarding other similar, if not identical, content disseminated by the University,” Pitt said in its filing.

In his proposed ruling, Helmerich also flagged a sentence written as part of a response on the Q&A website. The University said on the website that, with a union, students would “lose the ability to have an individual say in their specific program when it comes to appointments.”

Helmerich said in his proposed ruling that this sentence is a “substantial departure from the truth,” and could have coerced potential voters.

Pitt argued in its filing that Helmerich picked this one sentence out of thousands on the Q&A website, which was voluntary for grad students to visit, thus not affecting the outcome of the vote.

“Although this was a close election, proof that only one eligible voter saw this sentence and may have been affected by its substance does not warrant setting aside an in person election where roughly 1500 people made their voices heard freely and fairly,” the University said in its filing.

“I just wanted to send you a note encouraging you to vote in the graduate student unionization election,” Little said. “I was actually a little surprised to see that only 81 students in the School of Engineering (whole school) have voted so far.”

Helmerich said the email created the impression for eligible voters in Little’s department that “their votes were under close scrutiny and observation by the management of the University.”

But Pitt said in its filing that it was not using its list to conduct surveillance during the election — a lawyer retained by the University testified that she locked up the list each night and did not share any voter data.

Pitt further argued that the email did not cause a material difference in the election, as originally found by the proposed PLRB ruling, which had noted that 28 voters in the department had not yet voted prior to Little’s email.

“This determination was based on unfounded conjecture and ignores the facts in the record,” the University said in its filing. “The Hearing Examiner’s finding presumes, without any basis, that all 28 voters were so intimidated that they voted for no representative out of fear of reprisal.”