Review: “Joker?” I barely know her! 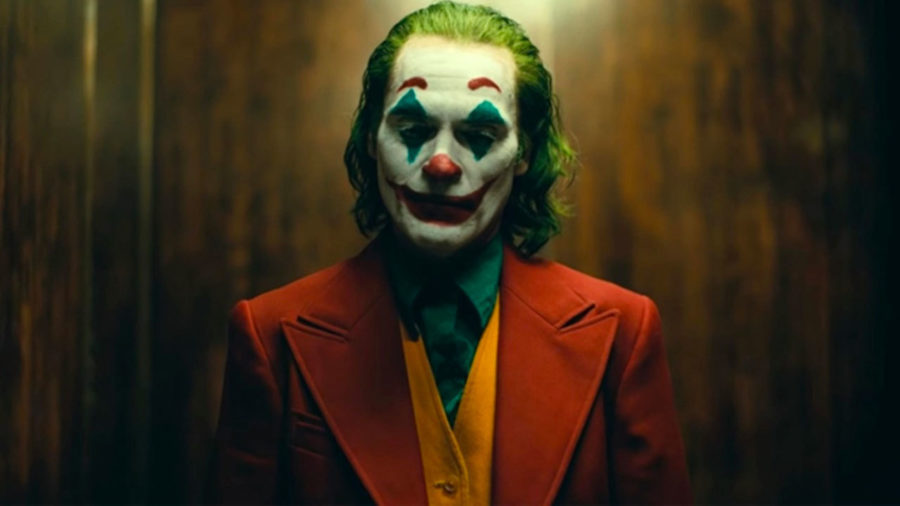 The new movie “Joker” explores the origins of the popular character.

In the beginning of Todd Phillips’ “Joker,” the titular character Arthur Fleck (Joaquin Phoenix) gets beaten up by a teenage gang so deliberately characterless it could’ve been pulled from a ’90s morning cartoon. He twirls a furniture store sign on the sidewalk while dressed as a clown for money, dancing joyfully and sinuously, before said teens snatch it from him. They lure him into an alley, smash his face with the sign and kick him while he cries and his fake flower lapel leaks water onto the pavement. The camera pans out. Ominous music sounds. Then the title drops like a cinder block — “Joker.”

I laughed out loud when I saw this. I don’t think I was supposed to. But the scene was so self-pitying that it wasn’t hard to imagine the director self-righteously nodding as he watched the first cut. “You see, it’s not him that’s crazy,” Phillips might’ve said. “It’s society.”

“Joker”’s origin story has an unlikely counterpart — Netflix’s recent release “Tall Girl,” about a 6-foot-1 high school student who finds friendship and love despite being … tall. “How’s the weather up there?” a classmate snidely asks her in one scene. “Face it, Jodi. You’re the Tall Girl,” a friend self-righteously tells her. Her story is entirely defined by her height. She’s not a character so much as a vector for a single personality trait.

“Tall Girl”’s trailer sparked deserved scorn and delight on Twitter. It’s a high school oppression tale that could’ve been written by algorithm. It’s stripped of nuance, complexity and features a main character whose identity consists of nothing more than the way people react to their defining trait. But the internet-fueled hype and fear surrounding “Joker”’s release mask a similar problem — it’s also a movie that could’ve been written by an algorithm.

“Hey freak!” one stranger shouts at Fleck as he walks down the street in his clown outfit. “Look at this joker,” Robert De Niro’s Letterman-esque character says to mock Fleck’s stand-up comedy tape. He’s later nicer to Fleck in person, but even then his tone echoes that of the Netflix film. He might as well have said, “Face it, Joker. You’re the Clown Guy.”

Fleck becomes a singular vehicle for rage in the way that “Tall Girl” is a vehicle for being tall. “What do you get when you cross a mentally ill loner with a society that abandons him and treats him like trash?” he howls at De Niro in one of the film’s most cringe-worthy lines. Without spoiling too much, the punchline is less funny and more predictable than you’d expect.

Phoenix gives a masterful performance despite the script’s limitations, though. His talent shines when Phillips gives him the least to say. In one scene, Fleck imitates a woman dancing on TV while holding his newly acquired gun. He raises his hands above his head like a belly dancer and twists his hips. He slips into reverie as his gun gives him the confidence to contemplate desiring and being desired in turn. Then he accidentally shoots his wall and jolts back to his repressed adulthood.

Later, he screams at the man who denies being his father in an opera house bathroom. “Maybe just a little affection, Dad! Maybe you would have showed up!” he simultaneously shouts and sneers. Phoenix delivers a twitching, pained portrayal of a man who craves love so deeply that its denial destroys his psyche.
But that same sympathetic portrayal also robs Fleck of any villainous agency. He’s a man who bad things happen to and who the film presents as being forced to do bad things in turn. His motivation seems to be to revenge himself on a city that’s unrealistically out to kill him. We learn that he has multiple mental illnesses (“I take seven pills”) but we never find out what they are. We learn that he was abused as a child but are only told the vaguest contours of what form that abuse took. Three drunk Wall Street guys who know Stephen Sondheim songs by heart beat him up on a subway. And we’re meant to understand that these inevitably lead to mass murdering psychopathy, despite evidence that many real-life extremists come from very normal homes.

Arthur doesn’t even do anything particularly villainous throughout the film. Phillips presents everyone who he kills on screen as having karmically deserved it. The fate of the one innocent character who he might’ve killed, which would’ve turned him into an unambiguously evil character, is left deliberately ambiguous. This is where the film most significantly fails. Showing a beaten-down man who willfully decides to kill a woman who’s not interested in him might’ve actually illuminated something about our time. But a movie about a self-perceived antihero who lashes out against a society that doesn’t understand him? I’d prefer if we’d stopped at “Atlas Shrugged.”