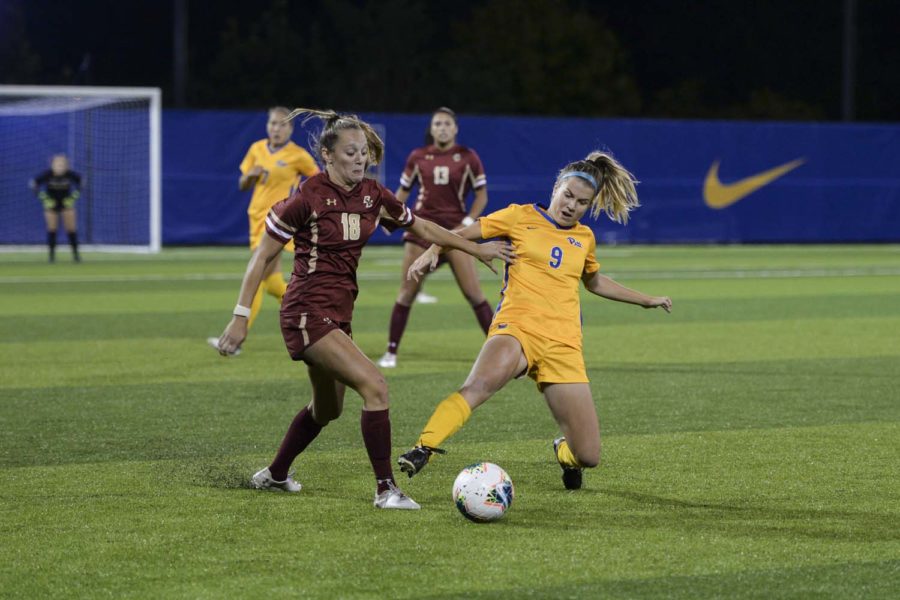 Alas, the Panthers would go winless in the ACC over the next three years, though The Chainsmokers would remain sporadically relevant.

But after 28 conference games and three years, Pitt’s winless streak ain’t ever getting older.

That’s because the Panthers (4-6-3 overall, 1-2-2 ACC) got back in the ACC win column Thursday night with a 2-1 overtime victory at home over Boston College (8-4-1 overall, 1-4 ACC), as first-year forward Amanda West provided the curse-breaking golden goal with a header in the 94th minute.

“I knew I had to be there because we’ve been working on that all season, being in the box when we get service in,” West said. “So I’m just happy I was able to get my head on it and put it in the net. And I mean, obviously you saw that’s huge for us.”

Head coach Randy Waldrum noted that the postgame feel of the momentous victory reminded him of his national championship wins at Notre Dame.

“You know what, I felt like we won the national championship, those years at Notre Dame,” Waldrum said. “To know what it meant to those players that’ve been here before and gone through all the rough times… it was a great feeling. It had me really emotional, too.”

Senior defender Cheyenne Hudson was one of those players who experienced the rough times — she was only a first-year player when Pitt won its last ACC game against Miami. It’s fitting, then, that Hudson played a crucial role in snapping the winless streak, assisting on both of Pitt’s goals with perfectly placed crosses into the box.

Pitt’s two goals were nearly identical. The first came in the 50th minute with a kick out to Hudson on the right wing, who launched a high cross into the box. Redshirt senior midfielder Juliana Vazquez rose above the clutter and deflected a header back into the left corner of the goal to go up 1-0, though BC would tie the game in the 75th minute.

The overtime goal followed the same script, with Hudson crossing the ball from almost the exact same spot. This time she found West right in stride, and the clutch rookie buried a header into the right side of the net.

Thursday’s win was certainly a landmark for the rebuilding Panthers, though the team had been knocking on the door and on the verge of a breakthrough in the weeks prior. In three of its four previous ACC games, Pitt tied twice and lost by one goal to a tough opponent in No. 6 Florida State.

“It’s kind of the first time we got a break and a ball bounced our way, too,” associate head coach Ben Waldrum said. “We felt like we had some results early on in the ACC that we probably should’ve taken advantage of. And so to come out and finish the way we did was a pretty cool experience, and pretty emotional for everybody.”

With the players, those emotions materialized on the field in the form of a heaping dogpile that encapsulated West following her goal. It may have presented an injury risk to the team’s star scorer — but in that moment, it didn’t matter.

After the game, West expressed optimism about the team’s ability and confidence moving forward.

“I think it just means we’ve got a bright future ahead of us,” she said. “… tonight, we were able to put the pieces together and get three points.”

Next, the Panthers will put their newfound momentum to the test when they face their toughest challenge yet — No. 3 North Carolina, at Ambrose Urbanic Field this Sunday at 1 p.m.