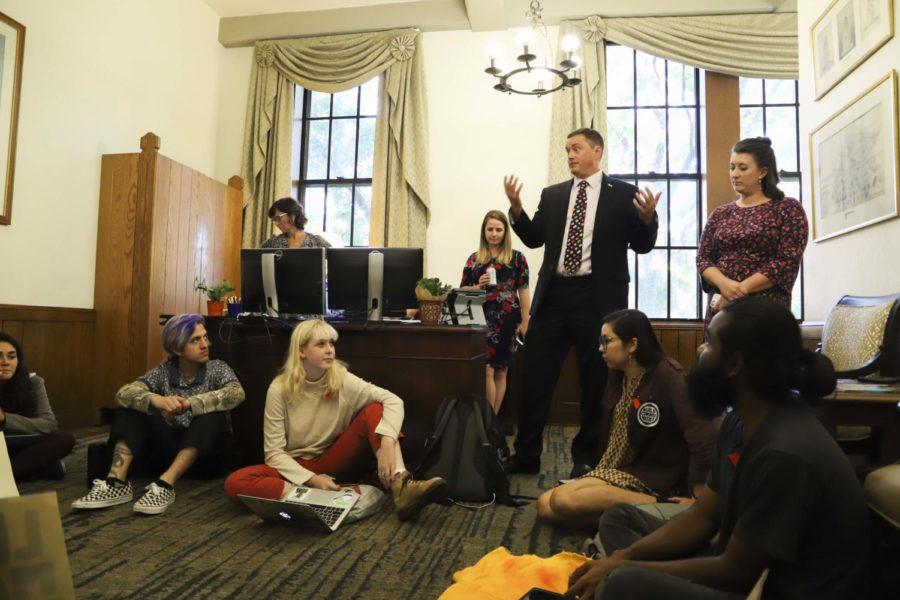 Associate Dean of Students Steve Anderson tells members of the Fossil Free Pitt Coalition that they cannot have a sit-in demonstration in the chancellor’s office.

Members of the Fossil Free Pitt Coalition had barely sat down in the waiting room of the chancellor’s office for their second weekly Friday sit-in demonstration before the chancellor’s deputy chief of staff, Lila Rose, calmly requested for the demonstrators to leave the office.

The week before, protesters sat in the office from 2 to 4 p.m. Now, as they pulled out homework assignments and started to talk about their weekend plans, Rose said demonstrators were interrupting official University business and needed to leave. She cited the fact that the chancellor’s office is a space in which officials are trying to work.

“This is a working office and this is a space that we use for people who have appointments,” Rose said. “I appreciate how you weren’t disruptive last time, but it’s not a study space.”

During Friday’s sit-in, which was marked by peaceful discussions and interactions between demonstrators and University officials, about 15 demonstrators sat with signs containing different messages of divestment, as they talked about their weekend plans and worked on homework assignments.

But Abhishek Viswanathan, a Ph.D. student in information sciences, pushed back against Anderson’s request.

“We haven’t gotten any kind of satisfactory response,” he said. “I know you said it’s not the right place [to protest], but what is?”

“I appreciate your willingness to talk calmly through this, because there’s certainly worse ways it could go, but it is disruptive,” Rose said.

After two minutes of silence, during which the demonstrators deliberated over Slack, the organizers decided to move the sit-in to the hallway outside the office, ending the standoff between the organization and University officials.

University spokesperson Kevin Zwick said in an emailed statement the University agrees students have the right to protest, but that Friday’s sit-in “disrupted the normal working operations.”

“The University of Pittsburgh affirms the rights of community members to engage in peaceful, orderly and nondestructive demonstrations,” Zwick said.

Zwick also noted that there are current plans to discuss divestment at high administrative levels.

“The Office of the Chief Financial Officer is working toward the goal of presenting the Environmental, Social and Governance criteria to the Investment Committee of the Board of Trustees for consideration by February,” Zwick said. “This criteria will screen for investments that align with the University endowment’s investment objectives and our institutional values.”

Seth Bush and Eva Resnick-Day, Pitt alumni from the class of 2012, were present at the demonstration in support of the efforts of Fossil Free Pitt. They said divestment from fossil fuels is a direct action the University can take to combat climate change.

Bush criticized the University’s response to the sit-in, claiming that officials’ respectfulness was a method of dragging out the discussion.

Both Bush and Resnick-Day were involved in efforts to get the University to divest from fossil fuels in 2008, and they said a divestment campaign at Pitt shouldn’t still exist 11 years later.

“The University is acting like we’re being unreasonable and disruptive by being here, but the truth is they’ve been asking for a vote for five years and have gone through all of the traditional and proper channels of having a conversation,” Resnick-Day said. “At some point there just needs to be a vote.”