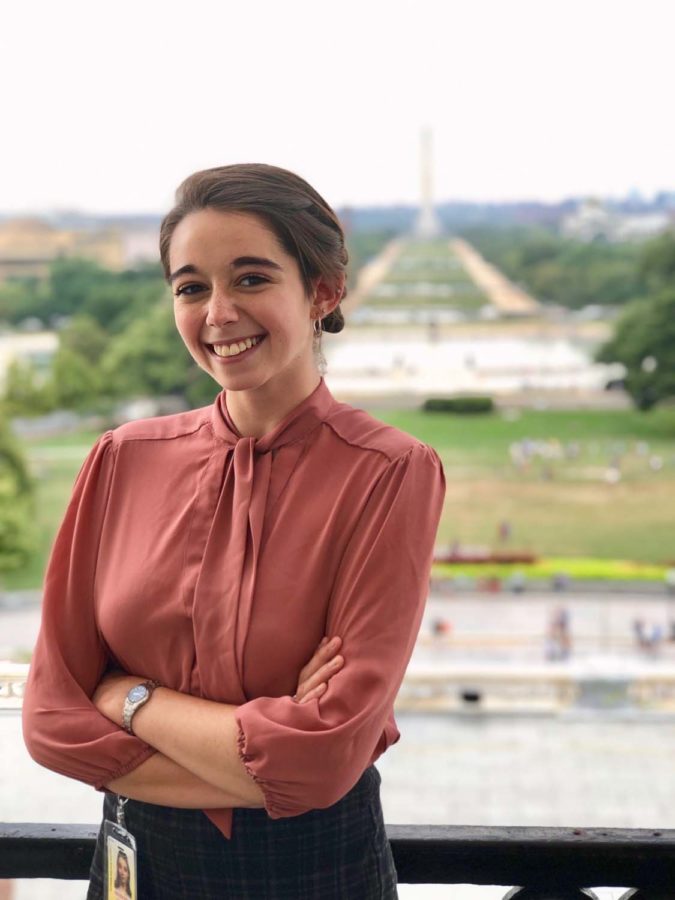 Kathryn Fleisher, a senior politics and philosophy and GSWS double major, is the founder of the national gun violence prevention nonprofit Not My Generation.

When the Tree of Life massacre rocked Pittsburgh nearly a year ago, Kathryn Fleisher, a member of the Reform Jewish Movement, was devastated.

“I had trouble doing normal things like going to class or feeding myself the week after,” Fleisher said. “I definitely had some survivor’s guilt.”

But there was one thing that helped.

“The thing that I could do was organize and bring people in and build coalitions and host rallies and give speeches. That made sense to me in that really terrible moment,” Fleisher said. “Organizing was the only thing that made me feel human again.”

Fleisher, a senior politics and philosophy and GSWS double major at Pitt, founded Not My Generation in December 2018, a national nonprofit focused on inspiring young people to advocate for intersectional, localized gun violence prevention.

Fleisher’s involvement in gun violence prevention advocacy began in 2015 with the Reform Jewish Movement and escalated following the February 2018 shooting at Marjory Stoneman Douglas High School in Parkland, Florida. Even before this, Fleisher said she has always felt a need to help people. She just wasn’t sure how.

“Since I could walk and talk, I wanted to be a doctor because it made sense to me that doctors help fix people,” Fleisher said. “But then after I got older, I realized you didn’t have to fix issues one by one. They can be fixed via policy.”

According to data compiled by Gun Violence Archive, the number of mass shootings — defined as a single incident in which four or more people not including the shooter has died —  has exceeded the number of days in 2019 thus far, including 22 school shootings.

The Parkland shooting, which killed 17 people and wounded 14 others, inspired a new wave of gun violence prevention advocacy, organized in large part by survivors of the shooting. Fleisher was one of these activists in the now youth-led movement.

In March 2018, Fleisher helped organize around 2,500 Reform Jews representing 50 different universities to take part in the March for Our Lives, a student protest advocating for legislation to prevent gun violence, in Washington, D.C.

At the march, Fleisher met Lindsey Aranson, a junior film studies production and English literature major at Pitt. Aranson was so inspired by Fleisher’s early work that she decided to make a documentary detailing Fleisher’s life and work with Not My Generation this year.

“Last year she organized a trip to D.C. for March for Our Lives where we lobbied and talked to Congresspeople, and I really admired her,” Aranson said. “So when I saw she was doing Not My Generation, I thought, ‘This is perfect, my film has come to me.’”

A major portion of Aranson’s film will document Not My Generation’s inaugural summit in Washington, D.C., on Nov. 8-10, which is supported by high-profile partners including the NAACP, Center for American Progress, Religious Action Center of Reform Judaism, March for Our Lives, Youth Over Guns, Generation Progress and Team Enough. To finance the summit, Not My Generation has raised $90,000.

The summit is bringing together 125 advocates aged 18 to 25 from all over the country in coalitions or teams of four to five people. At the summit, Not My Generation plans on providing each group with an action plan specific to their local area, addressing each community’s diverse needs.

Fleisher said the response from various communities after the Tree of Life shooting inspired her organization’s intersectional, team-centric approach.

“I saw the kind of relationship building that was going on across lines of difference in the City, particularly the Muslim and Jewish communities, but I also saw that when the cameras turned off and the Shiva period ended, it started fading,” Fleisher said. “I wanted to do something to keep that at the forefront of the movement and have everyone fight for common sense gun reform.”

Madison Ricker, a junior political science and English writing major, is attending the conference in November as a part of a four-person coalition. She said she is excited for the conference and the skills she will learn to benefit her community.

“The summit was something I wanted to be involved with and I feel really lucky that I get to be involved with it because it’s [Fleisher] running it,” Ricker said. “Unfortunately we have to step up and say enough [is] enough, and I’m really glad that we’re able to build the framework for the next generation.”

Fleisher’s commitment to ending gun violence is extensive, so much so that she dedicates around 35 hours a week to Not My Generation.

“It sounds cheesy, but I feel very drawn to this work,” Fleisher said. “It has a clear solution and it’s just going to take people to fight for it, and I’m willing to fight.”

“I don’t understand how she does it all, but I’m so glad I get to watch and experience it,” Ricker said. “We joke all the time that we don’t know how she just goes, goes, goes.”

Despite all her accomplishments, Fleisher credits her organization’s success to her executive and community partners.

Fleisher’s ultimate goal for Not My Generation is a testament to her passion — she wants it to have no reason to exist.

“We have the tools to end gun violence, or at least drastically reduce it, and if we can do everything we can and actually put those laws and funding for research and community programs into effect, I really think we have the ability to stymie the flow of gun violence,” Fleisher said. “I want to work ourselves out of a job.”