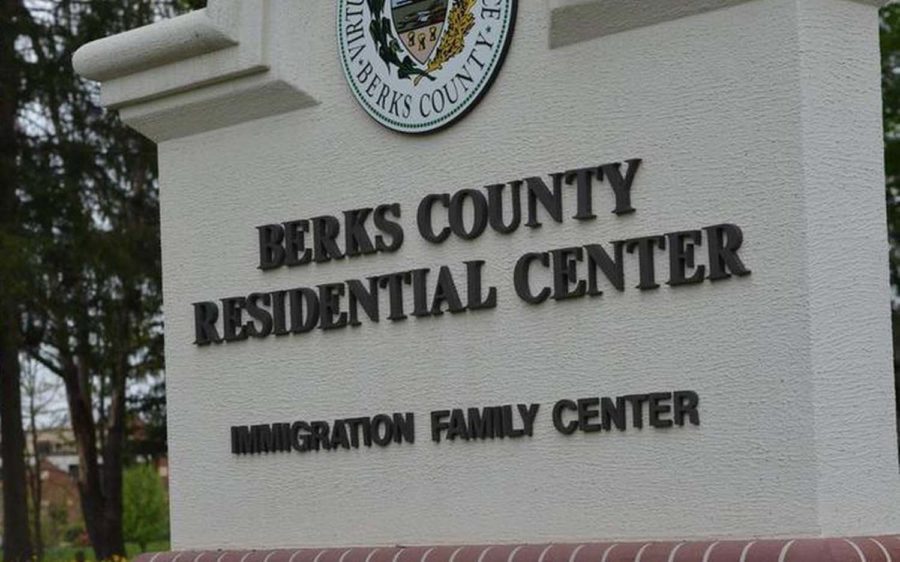 Berks County Residential Center is one of three family detention facilities in the country in which ICE detains undocumented immigrant families.

Nearly 80 years after former President Franklin Roosevelt signed an executive order commissioning the relocation of Japanese-Americans to internment camps in the wake of World War II, thousands of undocumented immigrants are being relocated into detention centers across the country.

One such detention center is the focus of Michelle Angela Ortiz’s film “Las Madres de Berks.” The film was shown at the Frick Fine Arts Auditorium Thursday night in a screening hosted by the Shut Down Berks Coalition, an activist organization, in conjunction with Pitt’s history of art and architecture department. The 30-minute documentary follows two years in the lives of four immigrant mothers and their children detained at Berks County Residential Center.

Berks, which is located in Leesport, is one of three family detention centers in the country — the other two are located in Texas — in which Immigration and Customs Enforcement detains undocumented immigrant families. These families are forced to stay at the center until their asylum cases are addressed by the court, after which they are either deported or allowed to stay in the country.

Ortiz said she frequently visited Berks while the mothers in the film were still detained. She originally worked with 14 mothers at the facility, but within five months of her visits, 10 out of those 14 mothers at Berks were deported back to their home countries.

The film features a collection of interviews Ortiz conducted, in addition to infographics, scenes from protests and displays of Ortiz’s artwork, such as murals, throughout Pennsylvania. Despite being released from the detention center, three of the four mothers are given fake names and have their faces concealed to protect their identities from the ongoing threat of deportation from ICE.

In the interviews, the mothers recount how dehumanizing their treatment was in the facility. One mother mentions how insensitive the medical staff were when treating her son’s urological condition. Another mother recalls the lack of sleep she and her child suffered because of the constant ID checks. All mention the constant surveillance they were under at the center.

The struggles of living in detainment had an even more profound impact on their children, some of whom spent a significant part of their childhood in the facility. Some of the children had even started to display suicidal thoughts and tendencies.

Maria Sotomayor, deputy director of the Pennsylvania Immigration and Citizenship Coalition, attended the screening and answered questions from the crowd. She said she found the film impactful because of the way it drew attention to the inhumane treatment of immigrants in detention here in Pennsylvania.

“A lot of the time, we don’t think about what we’re experiencing. We just think ‘Oh yeah, there’s a detention center. They’re just staying there,’” Sotomayor said. “But we don’t consider the living experiences.”

With growing concern for their children’s well-being, the mothers eventually organized a hunger strike with hopes of attracting media attention to the conditions at Berks. After 16 days of refusing to eat, they caught the interest of major news outlets, which brought attention to the Obama administration’s harsh detainment policy for immigrants from El Salvador, Honduras and Guatemala.

The strike was eventually put to an end, as the administration at Berks threatened to separate the children from their mothers, alleging they were physically unfit to provide care. After nearly two years of confinement, three of the four mothers were conditionally released with ankle monitors, while one was deported back to El Salvador with her son.

Although the four mothers were released, the hardships they endured in raising their children in detainment have continued to haunt them to this day.

“The film became a tool for them to share their stories,” Ortiz said. “I think what’s really important about the film is that it’s not just a tool for advocacy, but it’s also a way to share these stories without having to retraumatize the mothers in the telling of their stories over and over again.”

The facility was recognized as a legally operated institution because it possessed a state-issued license until 2016, when the Pennsylvania Department of Health and Human Services revoked the license. Berks responded by filing an appeal to court, which for the past three years has still not reached a decision, so Berks continues to house detained immigrant families.

However, the coalition has not given up on closing down Berks County Residential Facility. Sotomayor explained that the governor of Pennsylvania has the power to issue an emergency removal order, which can override Berks’ operation.

“We are pushing for Governor Wolf to issue the ERO. As soon as he does that, the detention center will just stop operations and we can reach out to the families detained at Berks,” Sotomayor said.

This initiative to force Gov. Wolf to mandate an ERO has been the primary goal of the Shut Down Berks Coalition, who have organized protests outside the Capitol Building to gain Gov. Wolf’s attention. Ortiz said her “Familias Separadas” public art project, which includes “Las Madres de Berks” and citywide murals, has been instrumental in expanding the coalition’s cause by sharing the four mothers’ stories.

“I think that art is such a powerful tool that sometimes is underestimated when we think about the change it can cause,” Ortiz said.

Both Ortiz and Sotomayor concluded the event by asking the audience to take a deep breath. They encouraged everyone to take action against Berks by calling Gov. Wolf’s office and by attending the organized events posted on the coalition’s Facebook page.

At the end of the night, many of the attendees left the screening with a new perspective on the the detainment of undocumented immigrant familes. Vivian Zauhar, an undecided first-year at Pitt, said she was empathetic to the mothers’ stories and felt deeply inspired.

“The screening was definitely emotional, thought-provoking and also instilled a great sense of urgency to ask for change,” Zauhar said. “There was definitely a sense of bewilderment at these things that are happening, and that people are getting away with them.”