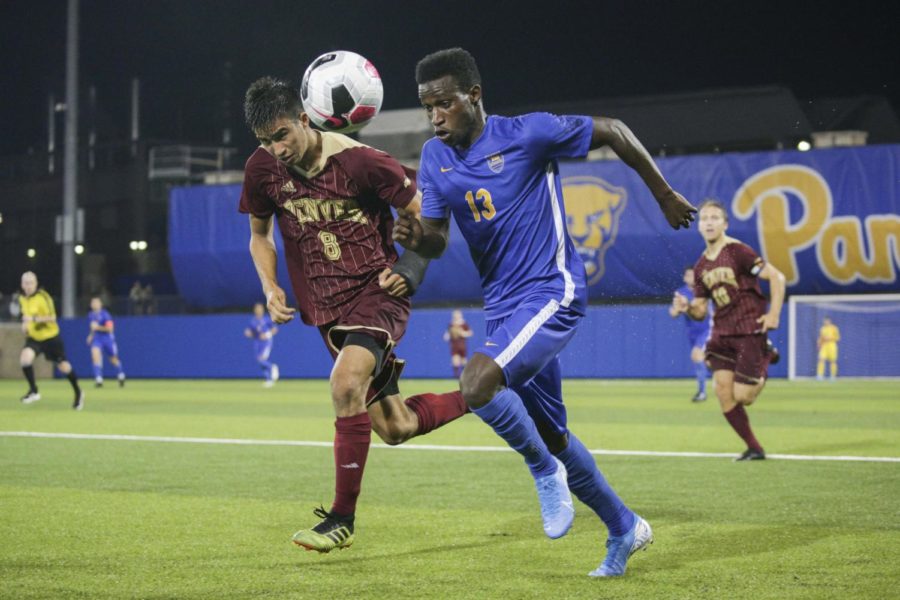 Junior Alexander Dexter (13) rushes after the ball alongside University of Denver’s Destan Norman (8).

The Pitt men’s soccer team traveled to face in-state rival Penn State on Tuesday night and failed to capitalize on its recent momentum, losing 3-1 at Jeffrey Field in State College.

The Panthers (6-5-2 overall) came into the game following a successful home stand in which the team won three of its four games, only losing 2-1 to No. 20 North Carolina. The Nittany Lions (6-2-2) also entered as a team on a hot streak, having only lost twice all season — both to top-10 opponents.

The first half saw Pitt lead the attack, getting the first four shots of the game within the first 13 minutes. Only one of these five shots had to be saved, though, the first by junior forward Alexander Dexter. Penn State launched the next two shots, one from senior midfielder Aaron Molloy that was blocked and another from redshirt freshman defender Adam Laundree that missed left.

The Panthers continued the offensive onslaught, but still couldn’t get the goal that would put them in front. They got the next five shots, four of which came from first-year midfielder Valentin Noel. Three of his shots were also on goal, forcing first-year goalkeeper Kris Shakes to make saves. The other shot was taken by junior forward Edward Kizza, which again was saved by Shakes to keep the score level.

Despite Pitt’s continued pressure, Penn State managed to take the lead on a penalty kick from Malloy in the 37th minute after a foul on redshirt junior defender Tim Ekpone. Penn State only had one other shot in the first half, which was from sophomore forward Joshua Dabora.

To recap the first half, the Panthers managed to take nine shots, five of which had to be saved by Shakes, while the Nittany Lions only had four shots, one of which was a penalty shot, that gave them a 1-0 lead at the end of the first half.

Penn State then broke the game wide-open, scoring two goals within the first four minutes of the second half to take a 3-0 lead. The first goal came from first-year forward Liam Butts, who slipped it in the lower right corner of the goal after a brilliant assist from Molloy. The second goal came off from two headed passes by Laundree and redshirt junior Pierre Reedy. When the second pass came down, first-year defender Jalen Watson was there to notch his first goal of the season.

The Panthers still outshot the Nittany Lions 9-4 in the second half. They were only able to get one goal out of their efforts, as redshirt senior defender Bryce Washington made the score 3-1 in the 85th minute. Both sophomore defender Nyk Sessock and Dexter led the Panthers’ offensive effort with two shots each.

The player of the game was Shakes for Penn State, who recorded a career-high 10 saves in the game. His performance against a high-powered Pitt offense kept the game within Penn State’s reach and allowed it to take the lead and end up winning quite comfortably.

Next, Pitt will travel to Charlottesville on Friday to take on No. 1 Virginia in what will be a tough test for the Panthers.