Muslim, Jewish community leaders speak out against hate at lecture 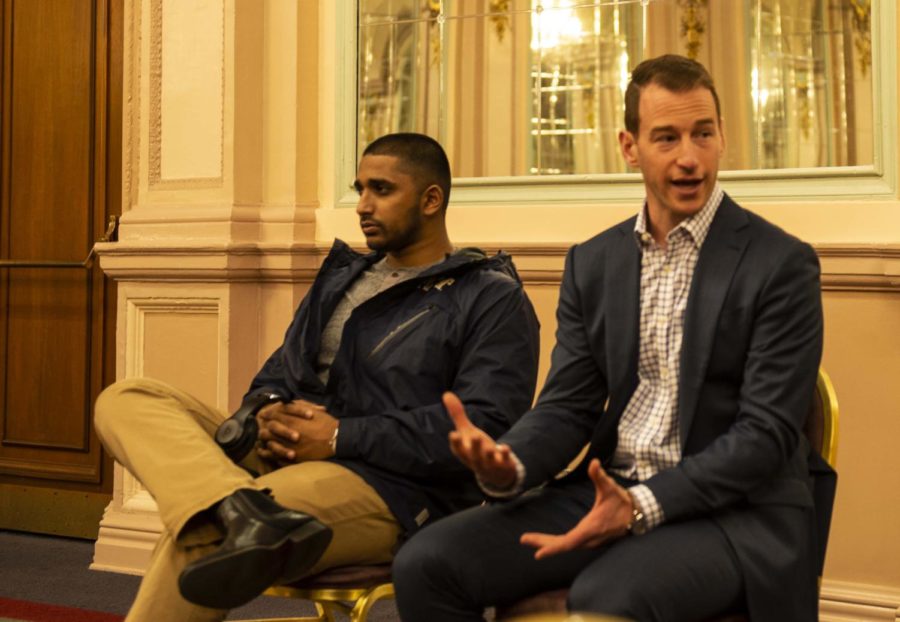 Wasi Mohamed (left) and Andrew Exler addressed a small gathering of Pitt students Wednesday evening as part of a “Speaking Out Against Hate: How to Combat Hateful Speech and Acts” lecture.

After shots were fired at the Tree of Life synagogue last October, Wasi Mohamed said the Pittsburgh Muslim community was prepared to support their Jewish neighbors, as the two groups had already been friendly with each other long before that.

“On Oct. 27, we did not need to look for the synagogue,” Mohamed said. “We just showed up because we already knew where it was.”

Mohamed, a Muslim comunity leader and the past executive director of the Islamic Center of Pittsburgh, addressed a small gathering of Pitt students Wednesday evening in the William Pitt Union’s ballroom as part of a “Speaking Out Against Hate: How to Combat Hateful Speech and Acts” lecture. He spoke alongside his friend Andrew Exler, a Tree of Life congregant, Jewish community leader and leader of the “#Menorahgate” fundraising campaign, fielding questions from students about social action, hateful trends and building relationships.

The topic was something organizers Kyle Coopersmith, a junior politics and philosophy major, and his Zeta Beta Tau brother Christopher Minjock, a senior economics and communications major, felt was especially important, given the upcoming anniversary of the Tree of Life massacre, which resulted in the deaths of 11 Jewish worshippers at a Squirrel Hill synagogue. It is the deadliest attack ever on the Jewish community in the United States, according to the Anti-Defamation League.

“We knew we wanted to have Exler speak, because he’s a Jewish Pittsburgh native and because he was able to pull together a successful grassroots movement,” Coopersmith said.

They reached out to Mohamed after hearing his “powerful” speech at the vigil for the shooting victims, Minjock added.

Exler and Mohamed had already met before the panel — Exler reached out to Mohamed after the steadfast response by the Muslim community of Pittsburgh Jews, both in acts of solidarity and with the $238,624 in donations they raised.

“You’re a young guy, I’m a young guy — what can we do to keep this relationship going?” Exler said of his decision to reach out to Mohamed.

Much of the lecture, similarly, had to do with building relationships.

Though Exler and Mohamed became friends after Oct. 27, 2018, the relationship between Pittsburgh’s Muslim and Jewish communities didn’t begin with the support shown after the Tree of Life massacre.

Mohamed attributed the impact of the Muslim community’s response to the anti-Semitic attack to relationships that were already deep-seated before any shots were fired.Muslims attend Shabbat dinners hosted by community rabbis, and Oakland Jews supported the Islamic Center’s humble beginnings as an organization when it was run out of a one-bedroom apartment on Atwood Street.

Exler and Mohamed said their own relationship, and that between the communities they represent, relies on open dialogue — which can promote understanding and prevent hateful acts.

“How likely are you to dismiss someone if you don’t have something in common? Islam and Judaism share 70% of the same laws, but if [Muslims and Jews] never discuss our fundamental differences, we are missing out on some really interesting stuff,” Mohamed said. “To not be able to talk shows a weakness of relationship.”

Jonathan Perlman, a senior mechanical engineering major who attended the lecture, said he appreciated the solidarity between Exler and Mohamed.

“I think it was important to hear from two sides that are normally viewed as opposites fight the same issue,” Perlman, a Jew, said. “Especially when anti-Semitism and Islamophobia are on the rise.”

“You need to want to do [the work and make the connections],” Exler said. “Not just right now, but you need to keep it going long-term.”

Reflecting on many organizations’ responses to Tree of Life, Exler said it is convenient to click on a link and donate to a cause, but that doesn’t necessarily lead to impactful relationships. Exler said the strength of these groups’ commitments to remembering the victims and combating hate will only become evident in the years to come with continued support and outreach.

Mohamed said he believes that forming these habits in college — which lead to more consistent support for underrepresented communities — is essential for any student wanting to make a lasting impact.

“Ask questions of people who are in communities more impacted by issues [such as anti-Semitism, Islamophobia, xenophobia and systems of oppression] than you are,” Mohamed said. “Be a truer ally.”

After experiencing Tree of Life and religious hatred firsthand — Exler witnessed the vandalization of property with swastikas at a past job and Mohamed had his childhood home vandalized — both men called on students to be vigilant, citing increases of hate speech during election years.

Despite these difficult topics, Mohamed tried to impart a hopeful message. He and Exler said they both believe in the power of ordinary people working together.

“[In Islam] the best good deeds loved by God are those that are small and consistent,” Mohamed said. “Grand gestures are nice but these are the most impactful.”