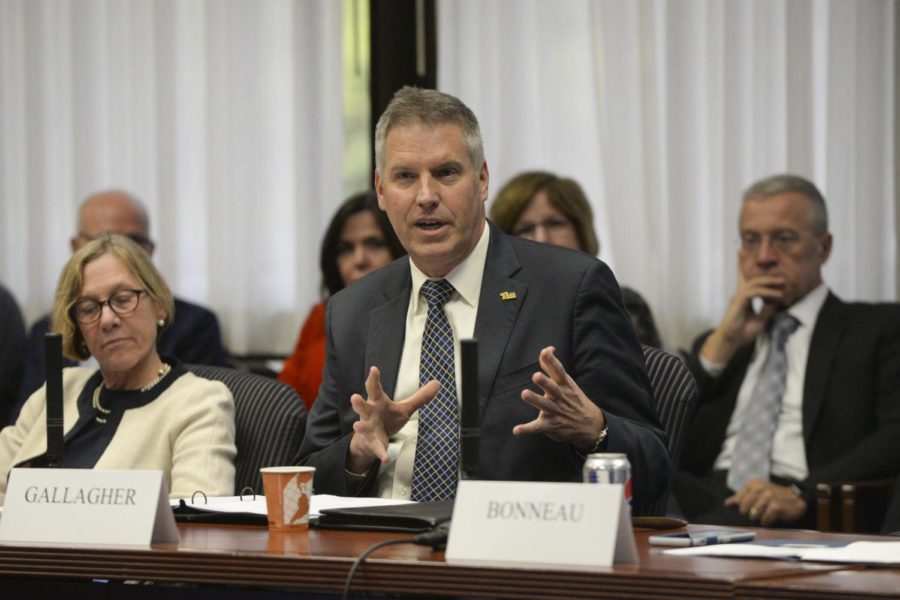 Following the Tuesday release of a 217-page report detailing sexual assault and misconduct at Pitt, which 15% of the student body responded to, Chancellor Patrick Gallagher had strong words for Pitt’s campus culture.

“The fundamental takeaway is that sexual assault is far, far, far too prevalent on campus,” Gallagher said.

The University Senate Council discussed the report, which was conducted by the Association of American Universities, and several other key campus issues at its meeting Wednesday afternoon in Posvar Hall.

The report found that since entering college, 11.2% of respondents said they experienced penetration at least once and 16.7% of respondents said they experienced sexual touching at least once, involving physical force or inability to consent or stop what was happening. Gallagher said the report demonstrated a large problem that needs to be addressed.

“A greater awareness of what kind of support the University can provide has certainly improved, but it’s nowhere near where it should be,” Gallagher said. “I think this is going to demand a much broader, much more engaged set of approaches.”

Gallagher announced Tuesday that the University is launching several new initiatives to combat these issues, focused on “empowering the Pitt community,” rather than changing administrative protocol. These approaches include hosting listening sessions, creating several dedicated funding streams, establishing an education and prevention task force and launching a dedicated education and prevention office.

Some student representatives on the Council said the report accurately represented the assumptions they had about sexual misconduct on campus, specifically its high prevalence.

Anthony Verardi, a graduate student representative from the Dietrich School of Arts and Sciences, said the report was difficult to hear.

Verardi also had a strong message for the Council about solving the problem. He said that Pitt has a responsibility to address the issue with tangible solutions, rather than just through messaging.

“I think everyone in this room, at this table, has to bear the burden of instilling respect for the bodily autonomy of the people around us whether that’s students, faculty or staff,” Verardi said. “Platitudes about coming together are not going to be enough in compared to actively dismantling the power that us upheld the cycle of trauma within the university system.”

Gallagher also provided updates on major campus construction projects. He noted that the current project to rebuild the crosswalk at the corner of Fifth and Bellefield avenues is winding down, as Bigelow Boulevard prepares to close between Forbes and Fifth avenues on Nov. 1. The road will be closed until Aug. 15, 2020, for a $23.7 million reconstruction project.

Gallagher said he is prepared to be disliked over the 10-month closure.

“I’m prepared to be hated for it, because I know there’s nothing good about that much disruption in that part of campus,” Gallagher said. “But we have a lot of essential infrastructure that needs replaced that people will care about when it stops working.”

Students have taken several steps recently to show interest in divestment — including SGB unanimously approving a divestment resolution earlier this month, the Fossil Free Pitt Coalition interrupting Gallagher at a Board of Trustees meeting and sit-ins held inside and outside the chancellor’s office.

Gallagher repeated Wednesday that the Board of Trustees ultimately decides whether or not to divest the University endowment from fossil fuels, not the University administration. He stressed that the board needs to be convinced there is a fiduciary reason for divestment, in order to protect the endowment’s financial returns.

“The board is responsible for preserving the endowment forever,” Gallagher said. “If the endowment can’t live forever, you are borrowing from future students.”

Gallagher said the movement’s only path forward is to craft a more convincing argument regarding profitability that could be presented to the board, unlike the one students made two years ago when the board rejected a similar divestment proposal.

“The one fact here that’s a little bit uncomfortable is that students did raise this issue, it did go through the Student Affairs Committee, it was raised with the full board and the board decided not to vote for investment,” Gallagher said. “The most important thing is the quality of that case.”

Senate President Chris Bonneau echoed this point and said shows of public support like petitions and resolutions will likely not sway the board, since they rejected an earlier proposal.

“Our efforts should be focused on supporting the case that these investments are inconsistent with our values,” Bonneau said. “But nothing is free, and that merits a lot of consideration.”

Peterson pushed back and said divestment is both socially and fiscally responsible, especially with the threat of climate change worsened by fossil fuels.

“We’re saying that we’re going to profit. We’re going to to extract and burn,” Peterson said. “We cannot do that if we want to have any semblance of life on earth to continue.”