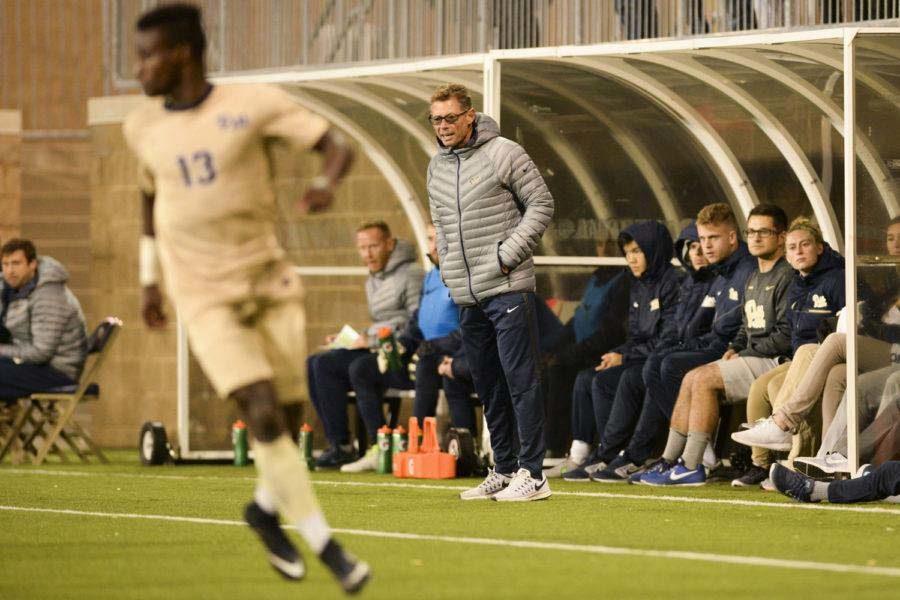 Head coach Jay Vidovich came to Pitt in 2015 after an illustrious career at Wake Forest where he served as an assistant coach from 1986-93 and then as head coach from 1994-2014.

While Pitt fans have primarily been fixated on football and volleyball teams this fall, the men’s and women’s soccer programs have also begun to make noise in the ACC.

The men are fresh off a 3-1 loss to Penn State on Tuesday night, but sit at 6-5-2 overall and 2-2-1 in ACC conference play. Meanwhile, the women have not fared as well, but still are treading water at 4-7-3 and 1-3-2 in ACC play. While neither of these teams have particularly spectacular records, it is important to understand how far both have come.

For the men’s program, they haven’t had a winning season since 2008, when they were in the Big East conference. They were coached by Panthers’ soccer great Joe Luxbacher, who still holds the record for most goals scored with 38 and points with 84 in a career. He coached the team from 1984-2015 and although he won Big East coach of the year twice in the 1990s, he finished his coaching career with seven straight losing seasons.

On the women’s side, the team has never reached great heights at all, with an all-time record coming into this season at 125-249-33. Their last postseason appearance was in 2010 in the Big East tournament, which was a loss to DePaul in the first round. Former head coach Greg Miller had a terrible record in his six years as head coach from 2012-17, going 32-69-8, including just one ACC win in his final two seasons, eventually leading to him being fired.

Waldrum is also recognized as one of the greatest soccer coaches in NCAA history. He coached both the men’s and women’s soccer teams at Tulsa from 1989-94 and then founded the women’s soccer team at Baylor, coaching from 96-98, before taking the head job at Notre Dame.

But both eventually found their way to Pitt and had to adjust from the high expectations of their former programs to that of the middling Pitt Panthers. Success hasn’t come easy or often for either program, despite their coaches’ championship pedigrees, though things are looking up.

Vidovich struggled mightily in his first season as head coach, going 2-13-3 overall and 0-6-2 in conference play in 2016. In those eight ACC games, the Panthers failed to score in six of those games and their two leading scorers tied at three goals a piece for the entire season.

In Vidovich’s second season in 2017, a 2-1 win against No. 21 Syracuse jump-started the struggling program. The win was the first ACC win in program history, ending a streak of 38 winless ACC games, dating back to 2013. It was also the first conference win since 2011 and the first against a ranked opponent since 2008, both coming when Pitt was still a part of the Big East conference.

That season the Panthers tallied two more impressive wins, defeating both No. 13 Columbia and No. 7 Notre Dame away from home in the regular season. But their season ended in a 5-0 blowout defeat at the hands of Notre Dame in the ACC Tournament, despite the Panthers’ improved records.

The next season saw similar results, 8-10-1, for the men’s team, which looked to initially warn of the program plateauing and not ascending to greater heights. That all changed in the first game of the ACC tournament, as they defeated seventh seed Virginia 2-0 in the first round. It was their first win in the ACC tournament and also cemented the star status of then sophomore forward Edward Kizza, who scored his 14th and 15th goals of the season, tying himself for third-most in a single season in program history.

In the quarterfinals, the Panthers drove the Duke Blue Devils to penalty kicks after a scoreless regulation and two overtime periods, where they lost 5-3. While they again suffered a heartbreaking loss, Pitt proved that it is a program on the rise.

Waldrum’s first season in 2018 was a little better overall than Vidovich’s at 4-12-1 overall, but went winless in the ACC, 0-10, including a devastating loss to Miami at home, when they surrendered a two goal lead and lost 3-2.

But Waldrum’s team has already achieved four wins so far in 2019, including a 2-1 overtime win over Boston College last Thursday. Victory over the Golden Eagles also ended a 28-game winless streak in ACC play that stretches back more than three years.
While this season won’t likely end in a ACC tournament appearance, women’s soccer at Pitt is definitely on the rise, especially with the attacking prowess of first-year forward Amanda West, who has eight goals and eight assists on the season.

The men’s team has also shown great improvement as they pass the midway point in their season, with a record of 6-5-2 overall and 2-2-1 in the ACC, with wins against Boston College and No. 22 Virginia Tech.

Kizza has kept up his impressive play, with eight goals and three assists, while first-year midfielder Veljko Petkovic has been an offensive force, scoring four goals and creating five assists. Kizza’s goal tally and Petkovic’s assist tallies are both tied for fourth in the ACC.

Both teams clearly deserve praise for coming so far, but there is still a lot of work for both teams and coaches Vidovich and Waldrum to do. These high-profile coaches will be expected to keep building both Pitt programs as they have at other schools.

If both coaches can continue to recruit players like West and Kizza, the teams will be in great shape going forward. Still, the challenge of playing in what many consider the best soccer conference in America means that it may take some time for these programs to achieve the kind of postseason success their respective head coaches are accustomed to.