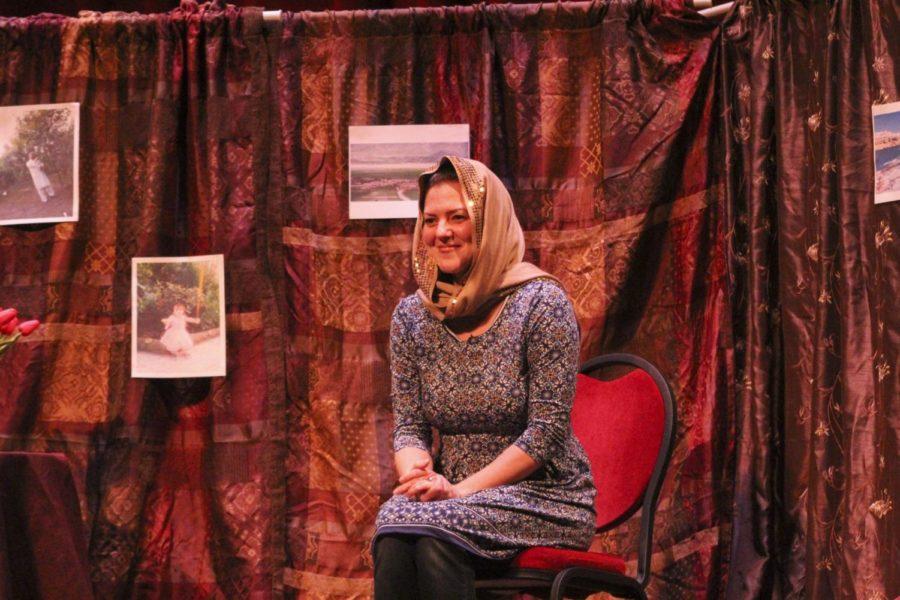 Tressa Glover tells the story of Mastoorah. Art as Activism: Excerpts from Khūrākī featured actresses who told the stories of three Afghan women who moved to America.

By MJ LaRocque, For the Pitt News

A vase of red tulips sat on a table in front of a headscarf-clad woman at the Charity Randall Theater on Tuesday. She plucks a tulip from the vase and holds it up to the light, considering it and telling the story of the home she left behind in Afghanistan.

The scene was part of an immersive theater experience called “Khūrākī,” created by artist Molly Rice, in which audience members come intimately close with the stories of several Afghan women who recently became American citizens.

“Khūrākī” came to the Stephen Foster Memorial, thanks to Pitt’s Open Door Project, which works to provide opportunities for the Pitt community to celebrate and appreciate diversity. Several actors told the stories of Afghan women from a script Rice wrote. Each story is 15 minutes long, and the women’s favorite homemade dishes are typically served throughout most performances, though were absent from this one because of a lack of a kitchen in the building. When the stories were finished, a panel, including the actors, Rice and a few of the Afghan women, took questions from the audience.

Rice began this storytelling journey with the Pittsburgh Arts Council Office of Public Art as a resident artist in May 2017. For her first year as a resident artist, she focused on learning about the refugee experience through Pittsburgh’s largest resettlement agency, Community Assistance and Refugee Resettlement at the Northern Area Multiservice Center. She then worked closely with Afghan women for the first 90 days after they moved to Pittsburgh.

In those 90 days, she would pick up families from the airport, get them settled in their new home and teach them about American culture. Rice also organized a weekly sewing class for women. Along the way her husband, Rusty Thalin, joined her in her work and became the co-producer and director for “Khūrākī.” Rice said Pittsburgh was the perfect city to her and her husband do their work.

“Pittsburgh is literally making our dreams come true,” she said. “Being able to enter such a rich, creative landscape with our own ideas and be able to activate them and make them reality has just been the best part of my creative life to date.”

The exhibit began with a presentation from Rice on her creative process. In the second year of her residency, she said, “Khūrākī” grew into a production. After starting the sewing group, Rice hoped to incorporate that as part of the project. However, she said when she talked to the women about it, they wanted to celebrate their culture through food because that’s what they knew best.

Rice ran with this idea. She interviewed several of the Afghan women from the sewing group and created a script to be performed by actors. According to Rice, this would provide a narrative portrait of the Afghan women and they would prepare the food that would accompany the story.

Actor Tressa Glover told the story of Mastoorah — one of the original members of the sewing group that Rice started, who chose Glover as the actor to represent her. The scene opened with Glover sitting on the edge of her seat, hands in her lap and her ankles crossed.

Mastoorah grew up in Kabul, which Glover pointed out on a map. This was a safe place from most of the political issues going on in Afghanistan until the Taliban came into power when she was 6. She remembered how girls had to cover their entire bodies and hide their books, and the trouble that girls would get into if they broke the rules. When the Taliban’s regime was removed, she said her community celebrated.

“We elected a new president, new government and all schools and universities opened immediately for girls and the Taliban left,” she said. “Now Afghanistan has everything — electricity, school for girls — the only thing we don’t have is peace.”

Next, Alison Weisgall, another actor, told the story of a woman named Nafisa. Nafisa is from Herat and said she chose Pittsburgh because one of her best friends lives in the area. Her husband approved of the choice and they moved here two years ago. She remembers her time in Afghanistan fondly and often wishes to go back to her family and the greenery there. Weisgall kneeled down and looked up to the ceiling, as though she were really sitting in a grassy field with trees hanging down over head.

“My mom’s there, she has a big garden with fruit trees,” she said. “When I look up in the trees with their fruits all fresh and colorful I feel like I don’t want to sleep, I just want to stay there under the trees. Stay there for a long time.”

Finally, Alex Manalo told Gul’s story. Gul is from rural Maidan Wardak where she grew up with 11 siblings. She married her husband, Tabee, when she was 14 years old, though reminded the audience several times that this is normal for her people. She came to America not long after getting married and was able to draw meteorological parallels between her homes in Afghanistan and America. Manalo used a nearby apple on stage to demonstrate a globe, explaining that Wardak is famous for its variety of apples.

“It gets cold there too, same as Pittsburgh. We have the same weather. When you see a map of the whole world Afghanistan and Pittsburgh are the same, the same line across the world,” she said. “Almost exactly as far away as we can be from one another. You can not go further away in the world without beginning to come back.”

At the end of the show, there was a small panel with a few of the women from the project, including Mastoorah, who was able to respond to some questions.

Audience member Carol Mullen, director of communications and undergraduate recruitment at the Dietrich School of Arts and Sciences, said she found the event engaging and informative.

“It’s this wonderful combination of education but also entertainment,” she said. “I don’t think that it loses any of intimacy because of the staging. In fact, I found myself leaning in to get closer just because the stories are so personal and so relatable.”

Mastoorah said she wants the show to be an educational experience for those that are curious about Afghan life and culture.

“We want you guys to know about our story,” Mastoorah said. “About different people and different cultures, different lifestyles.”