Pitt pauses testing of Starship robots due to safety concerns 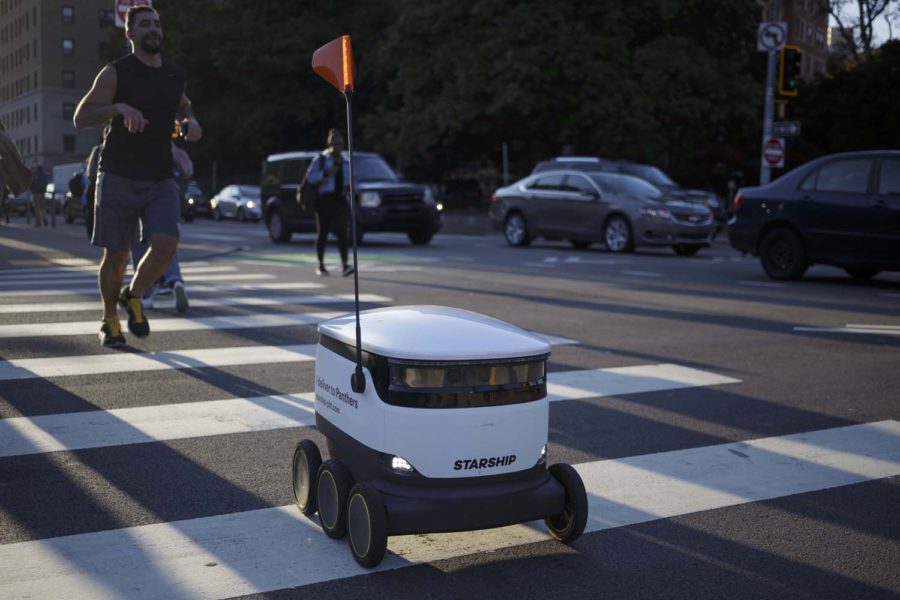 The testing of the Starship Technologies food delivery robots has halted due to concerns over potential safety issues for wheelchair users.

Pitt paused testing of its Starship Technologies food delivery robots after a student raised concerns about safety issues the robots may create for wheelchair users.

Emily Ackerman, a fifth-year doctoral student in Pitt’s chemical and petroleum engineering program, posted a Twitter thread Monday afternoon describing her experience being “trapped” on Forbes Avenue by a robot earlier in the day. Ackerman said when the Starship robots wait in the curb ramp to cross the street, wheelchair users like herself are unable to use the curb ramp to reach the sidewalk.

i (in a wheelchair) was just trapped *on* forbes ave by one of these robots, only days after their independent roll out. i can tell that as long as they continue to operate, they are going to be a major accessibility and safety issue. [thread] https://t.co/JHo5PlzMFs

Less than two hours later, Pitt replied to the tweet announcing it had paused testing the robots to “review the technology further and ensure everyone’s safety.” Starship also replied, saying the company was “urgently looking into this matter.”

We have paused testing to review the technology further and ensure everyone’s safety. We value your feedback and someone from Pitt will be in touch to learn more about your experience.

Starship announced in August that it would partner with Pitt and Sodexo to bring the white, 2-foot-tall delivery robots to Pitt’s campus, where students could order food from campus vendors to their door.

The robots began making test trips around Oakland earlier this month, still without an official launch date. Starship operates out of the previously empty Forbes Avenue storefront next to Panera Bread.

Ackerman expressed satisfaction on Twitter that Pitt had paused the program.

“I’m glad we have the opportunity to have a discussion about how society and technology are leaving minorities behind because this is a problem that’s only going to get worse going forward,” she wrote.

In a phone call, Ackerman said she noticed issues sharing the sidewalk with the robots before the incident, but she hadn’t anticipated the difficulty the robots would create for her in getting off the street.

Starship spokesman Henry Harris-Burland said Tuesday that the robots are meant to wait behind the curb ramp and Ackerman’s experience, which Harris-Burland apologized for, was a result of a mapping error at that particular intersection.

“We immediately looked into the issue and updated the mapping software for this intersection so it doesn’t happen again. All other intersections are being updated and reviewed right now,” Harris-Burland said in an email.

Starship completed “positive and thorough” testing with disability rights organizations including Guide Dogs, Disability Rights UK and the Royal National Institute for the blind, Harris-Burland said, but added the company will continue to work toward making the robots safe and accessible.

“We can always do more, and we look forward to discussing this in greater detail with Emily and other local wheelchair users over the coming days,” Harris-Burland said.

University spokesman Kevin Zwick reiterated that Pitt had paused testing of the Starship robots to review the technology.

“Throughout this process, Pitt and Starship have worked with our community partners including City officials, accessibility advocates, and business and community improvement organizations,” Zwick said in an email.

Heather Tomko, a research coordinator and public health graduate student at Pitt who uses a wheelchair, said she had encountered problems similar to the ones Ackerman described. Tomko recalled an incident earlier Monday when she had been unable to pass a robot as she navigated with her wheelchair in front of Towers.

“It was physically in the middle of the sidewalk, so if I wanted to pass around it, I couldn’t,” Tomko said. “I could see me having issues just like Emily did, where I could get stuck and trapped and not able to make my way around the robots on the sidewalk.”

Tomko, who blogs her experiences living with spinal muscular atrophy on The Heather Report, also noted that the delivery robots would be impossible for Tomko to use herself — they’re several feet below her range of reach.

“Once again, there are new technologies … that aren’t planning for people with wheelchairs, whether it’s in the use or in the implementation,” Tomko said.

Both Tomko and Ackerman expressed doubts that Starship would make modifications that would stop the robots from impeding the mobility of wheelchair users.

“I don’t know if there’s a place where it can wait [to cross the street] to not cause that kind of problem,” Ackerman said. “I don’t see a reasonable explanation for where it’s going to go.”

Ackerman said she thinks the issue is representative of a larger problem — that while technology and society are advancing rapidly, disabled people aren’t being given a significant voice in the conversation. As a disabled person working towards a degree in a STEM field herself, Ackerman said she’s on a “one-woman crusade” to boost underrepresented voices in STEM.

“Part of the reason why I was so vocal about it is because I think people didn’t think about it before,” Ackerman said. “When people see the robots, they don’t think about the problems it causes people like me. I wanted this to be something we could all see and learn something from.”

This story has been updated to include comment from Starship Technologies.