“The Office! A Musical Parody” brings Scranton to Pittsburgh 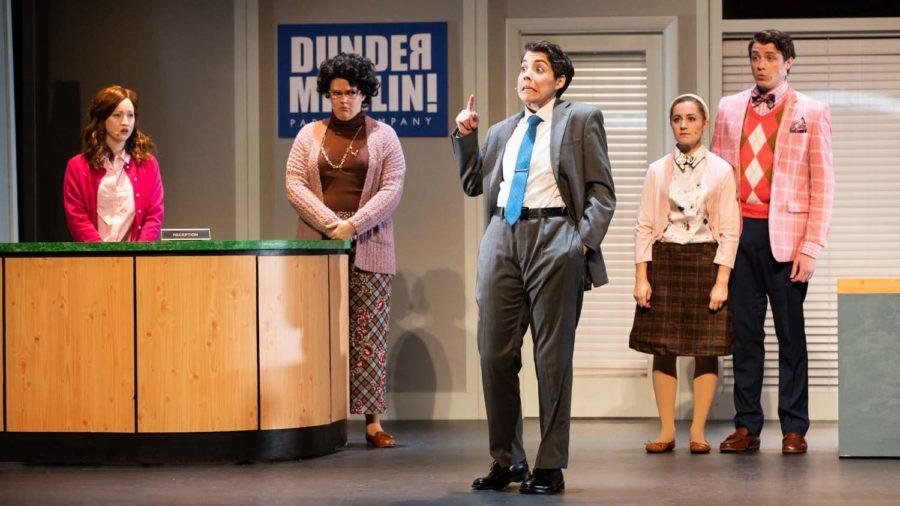 Since its debut in 2001, “The Office” has become a pop-culture phenomenon loved equally by those who have held dead-end office jobs and those too young to have encountered annoying bosses and awkward office romances.

The parody is the seventh musical from writing duo Bob and Tobly McSmith, whose other works poke fun at popular television series like “Keeping Up with the Kardashians” and “Beverly Hills, 90210.” Assaf Gleizner composed the score.

On television, “The Office” relies on a certain dryness to get its humor across — the appeal of its characters comes from the fact that the antics are just absurd enough to be funny, but not entirely unbelievable. There’s a thin line between exaggeration and utter caricature, and “The Office” toes it perfectly.

In live theater, and musicals in particular, it’s hard to maintain that subtlety. The nature of the genre requires over-the-top choices, because anything less may go unnoticed by the audience, a fact which the writers and the actors all seem to be aware of.

Played by actress Emma Brock, Michael Scott’s already goofy demeanor becomes exaggerated by highly embellished facial expressions and physicality. When Steve Carrell’s Michael Scott may have shown a little strain on his face to indicate that he was refraining from cracking a “that’s what she said” joke, Brock’s hunches over with a tight grimace and fists clenched in agony — only to launch into a musical number about how badly he wants to deliver his iconic catchphrase.

Casting a woman in the role of Michael Scott is a bold choice in and of itself, one that pays off in utter camp-factor. Brock’s masculinized makeup and costuming create the impression of Michael Scott without trying to copy the character or imitate masculinity directly. We’re still aware that this Michael Scott is ultimately a woman in a suit, which, coupled with Brock’s over-the-top acting, helps distance the show from reality and from its source material, serving as a constant reminder to the audience that the world the play creates is neither our own nor that of the original TV show.

Making a less successful transition to the stage is the character of Dwight Schrute. Dwight’s quirky demeanor and constant antics in “The Office” strike a delicate balance between annoying and loveable, and part of his wide appeal to fans is his lack of self-awareness. He’s frequently saying and doing inappropriate, sometimes unthinkable things — like in season five, episode 13, when he starts a fire in order to get his coworkers to take emergency preparedness seriously — but has no idea that his behavior is in any way out of the ordinary.

When Dwight, portrayed here by Christian Fary, can no longer deliver an absurd line with a look of stone-faced smugness, the character quickly becomes annoying rather than eccentric. Fary exaggerates his character’s nerdy mannerisms and know-it-all tone of voice, but the heightened acting that makes Michael’s character so successful in “The Office! A Musical Parody” actively hinders Dwight’s.

The success of Brock’s Michael Scott is furthered by Bob and Tobly’s choice to create a plot that revolves around Michael. Just like the original, Jim and Pam’s romance serves as a major plot point, and the last few minutes of the show take place after Michael has left to follow his love interest Holly to Colorado, but in general, Michael drives the story forward and gives it its charm. While Dwight’s character isn’t particularly strong, Bob and Tobly have avoided falling into traps of fan service by making him a relatively minor force in the show.

Meanwhile, musical numbers play off major events and memorable moments in th e show. The opening number is a light-hearted reworking of the TV series theme song, which welcomes the audience to Scranton and perfectly sets the tone for the rest of the musical. Other memorable performances include Patrick Constant’s entrance as Andy Bernard, during which he plays the banjo, and Angela, Pam and Kelly’s ballad telling each of their struggles with love, performed on three traveling toilets. Like its acting, the show’s musical numbers border on ridiculous and deliver in terms of camp and sheer entertainment value.

“The Office! A Musical Parody” stays loyal to its source material just enough to please the crowd, but its real beauty comes from the way it transforms those elements of the show we know and love best. Who knows, it may even have a Dundie on its way for Best New Musical.