Holocaust memorial exhibit “Lest We Forget” opens on the Cathedral lawn 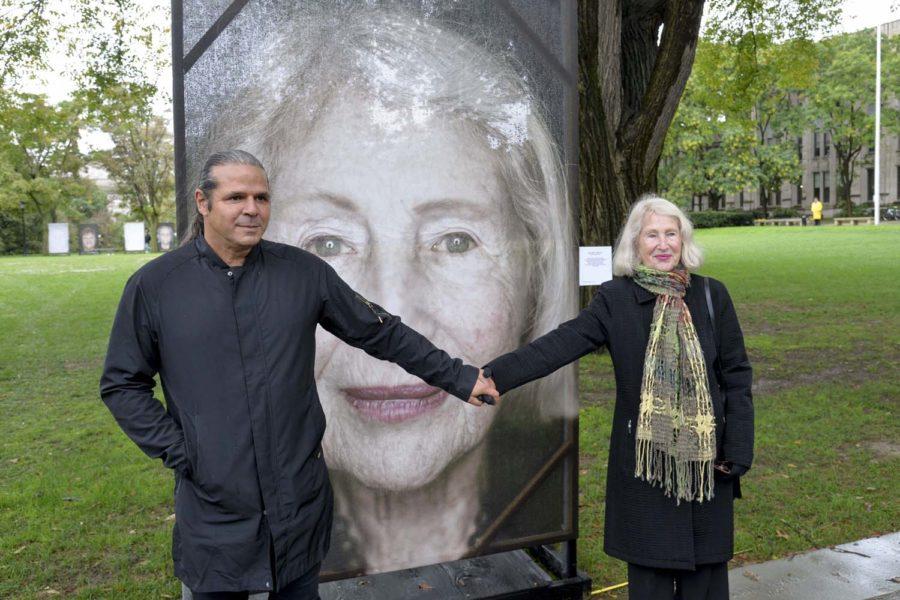 Luigi Toscano (left), creator of the “Lest We Forget” exhibit, holds hands with Solange Lebovitz (right), a Holocaust survivor, on Wednesday outside the Cathedral of Learning.

By Hayley Lesh, For the Pitt News

About a hundred community members congregated on the Cathedral lawn on Oct. 17 for the public opening reception of German-Italian artist Luigi Toscano’s exhibition “Lest We Forget” — a traveling art display that showcases photographs of Holocaust survivors. The reception included kosher food that observed Jewish dietary law, as well as a series of speeches, featuring Mayor Bill Peduto and Pitt Chancellor Patrick Gallagher.

This is the outdoor installation’s first time on display in Pittsburgh. It will remain on the Cathedral lawn until Nov. 15 and has previously appeared at the United Nations’ headquarters and the Lincoln Memorial Reflecting Pool. According to informative plaques in the exhibit, the installation makes its way to Pittsburgh in honor of the one year anniversary of the Tree of Life massacre in Squirrel Hill on Oct. 27, 2018 — the largest anti-Semetic attack in United States history.

The exhibit’s large-scale design and layout allows spectators to see the many survivors who are pictured and to read about their experiences. Peduto said in his speech that the exhibit serves as a reminder of the humanity underlying every historical event.

“Let this remind us that behind every event are people, and it is people who create history,” Peduto said.

Some of the Holocaust survivors photographed were present at the reception as well. Frances Spiegel, who is pictured in the exhibit, said she was hesitant about taking part in the exhibition, but understood its importance. Spiegel labored at Camp Ober Altstadt — a concentration camp that made up the Gross-Rosen system.

“I was very scared because I don’t like publicity,” Spiegel said. “But I think it’s important because in a few years from now there wouldn’t be any survivors left and it will just be like a dot in the history.”

Toscano said in his speech on Thursday that “Lest We Forget” aims to abolish hatred of any kind, and serves as rememberance for those who were affected by the Holocaust so something like it does not happen again.

“I decided to do something against anti-Semitism, racism and any kind of hatred,” Toscano said.

Prominent members of the Pitt community also attended the opening reception, including Vice Provost and Dean of Students Kenyon Bonner, who said the display allows spectators to understand the importance of history, especially within the context of current events.

“I think it’s really important. One of the things we know is that when you understand history, and particularly history in which people were victimized and the atrocities that were committed, it is less likely to repeat itself,” Bonner said.

“I think that it’s a good way to remember the Holocaust and recognize that there are real people that are survivors,” Moss said. “You can maybe even see some of them here and hear their stories and make sure that it’s not forgotten because it’s an important part of history.”

Bonner said he encourages students to see the exhibition for themselves, as a way for Pitt students to change their outlook on the world and their understanding of human life.

“I think it’s a part of who we are, unfortunately, but I think it’s a way to connect with humanity and hopefully have a different perspective on life and understand that life is valuable,” Bonner said. “No one should be harmed or killed or victimized because of their faith or their culture or their identity or their ethnicity.”

“Lest We Forget” will remain on display on the Cathedral Lawn until Nov. 15.